Share All sharing options for: Josh Ozersky on Chris Cannon's Attention to Detail 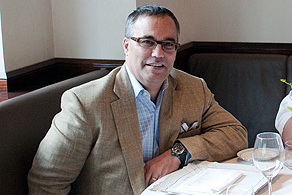 The greatest front-of-house man I ever knew was a strange man with thick glasses and a wry, awkward manner. He had nothing of Danny Meyer's breezy, magnanimous personal charm; nor was he a towering figure of personal authority, like the late, lamented Monsieur Robert of Le Veau d'Or. He was rather, like Lenin, a leader by intellect alone, the forger of some of the best restaurant experiences the city has seen over the last 20 years. Chris Cannon's resume reads like a history of New York's Italian restaurants: San Domenico, Remi, L'Impero and Alto (both under the Conant and White eras), Marea. Though out of the game at the moment, there is no question that he'll be back. How can he not?

Cannon's greatest asset, and occasionally his undoing, is that he loves food and wine possibly too much. He isn't what you would call suavely conversant about wine: he has an unnerving intensity when speaking in private, about the varietals of the Alto Adige, or 14 different kinds of anchovy. It can get boring, but of course the diner never sees any of it. Over the years, Cannon learned how to become invisible. Rather than greasing every diner personally, in the unctuous manner of some owners, he would typically infuse a gracious hostess or maitre' d with his minute instructions. Even the servers and food runners receive the equivalent of a graduate degree in the thousand methods of elegant understatement. I remember seeing him act out the physical attitudes a waitress should have at table, adusting his spine, rolling his shoulders backward, extending his arm at just the right angle. She must have been thinking, "Jesus Christ! Who gives a shit?" But the answer was always Cannon, bringing his almost autistic attention to detail and the cumulative weight of his restaurant experience to every aspect of the house. It was odd to think that he was still in his late forties; he seemed to have spent a hundred years in the restaurant business.

Of his recent misfortunes, there's no need to dwell. He's already been punished for whatever minor sins he committed to the jot and tittle. But his impeccable taste and freakish dedication will no doubt soon be back on the scene, where they belong. Because New York's restaurant world without Chris Cannon is an incomplete place.
— Josh Ozersky