Critic Ryan Sutton on the Service at Brooklyn Fare

Share All sharing options for: Critic Ryan Sutton on the Service at Brooklyn Fare 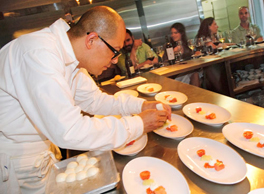 So whenever I think of the city's great servers, I always think of these two cool folks doing it right over in Kings County. Their names are Cesar Ramirez and Michele Smith. They work behind the stick at this local joint — The Chef's Table at Brooklyn Fare.

I mean, they probably wouldn't call themselves waiters, on account of the fact that Cesar happens to be the chef and Michele happens to be the beverage director. But they're the duo serving you food and pouring you wine at this 18-seat spot, which happens to have three Michelin stars, and where dinner for two happens to cost around $600 before wine.

Still, Brooklyn Fare feels like a neighborhood restaurant to me.

Gotta play by the rules.

Then Michele comes over, smiles and recites from memory the bottle of Riesling you brought in last time. It's pretty flattering. And frightening. But definitely more flattering than frightening. She is, without a doubt, a very cool customer.

You may not be a regular, but Cesar & Michele make you feel like a regular. And quite frankly that's key when you're dropping this much cash. Oh, the fact that the food is mind blowing, that doesn't hurt either.

I mean we've all heard stories. "Cesar's intense." Yeah of course he's intense, he's trying to cook a 30-course meal while you're talking about last week's Game of Thrones four feet away.

This one time, back when you could bring your own vino without a corkage fee, this obnoxious group of first-timers decided to ignore the fact that they were having dinner in public, and at a venue of some import, no less. They were sitting there, loud-talking, boozing it up with what appeared to be a bottle of $10 Australian Whatever (you know, 19 percent alcohol), and they're all like "Cesar, this food is fantastic, come join us for a drink!"

Now I know for a fact this is eating up Cesar inside. He's got his three stars. He's serving white truffles and Iranian caviar. And while most people in the room are drinking Champagne, these folks are washing it all down with supermarket swill. But the chef keeps a straight face. He smiles. He politely declines the offer for a drink. The guy is unflappable.

Last year, near the end of the meal, Cesar comes over to our section and starts chewing the fat with us (which he likes to do when he's finishing up). This guy next to me asks Cesar about all the rules, no cell phones, no blackberries, no note taking. Cesar smiles and says: "You know, I just want people to come here and leave their guns at the door."

There you have it. Brooklyn Fare. Just a neighborhood saloon. That guy holding the door for you on the way out? That's Cesar too. Mad respect.