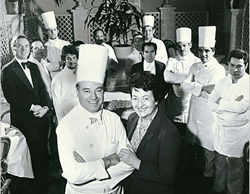 Omnipresent in both the front of the house and the back, meaning the kitchen, it always seemed as though André Soltner, the chef-proprietor of the late, lamented Lutece, might just have a twin. Dressed in gleaming, spotless whites with a rakishly towering, knife-pleated toque blanche, he circled the dining-rooms on both floors, stopping at every table to discuss the menu with each guest, whether a regular or a first-timer. He would then disappear into the kitchen to oversee the orders, with a clear image of everyone whose food he supervised.

Knowing who one is cooking for has to add a sense of responsibility, especially as Soltner walked around during the meal to see if it met expectations. He considered himself "just a soup merchant" and felt that any serious restaurant should always be able to provide a boiled potato, cooked white rice, and consommé. He filled requests for substitutions gracefully and generously.

There could be no doubt that the man really cared, which is why he ran one of the three or four best French restaurants this country ever has had, and certainly the most beloved and missed.

[Photo: Soltner with his wife and crew via the New York Times"]