Share All sharing options for: A Trip to Toffenetti, Times Square's 1000 Seat Restaurant

Every once in a while we like to take a look at the rich history of a restaurant that is no longer with us. Today: the mighty Toffenetti Restaurant in Times Square.

In 1940, an Italian immigrant named Dario Toffenetti opened a splashy, 1,000 seat restaurant in Times Square that offered a little something for everyone. For almost 30 years, it was one of New York's strangest and most popular eating establishments. Here's a look back at the rise and fall of Toffenetti, "the busiest restaurant on the world's busiest corner."

Humble Beginnings:
Before setting his sights on New York City, Dario Toffenetti cut a swath through the Chicago restaurant world.

Toffenetti immgrated to the United States from his native Italy in 1910. After stints as an ice cream vendor in Cincinatti and a baked potato salesman in Wisconsin, he landed a job as a bus boy at the restaurant in Chicago's ritzy Sherman House hotel.

[Dario with Idaho Grower Joe Marshall via Grown in Idaho; Toffenetti ad via Restaurant-ing Through History a Chicago location of Toffenetti in the 1960s, via World's Fair Community]

With $3,500 in savings, Toffenetti struck out on his own in 1914 with the opening of the very first Toffenetti restaurant, right down the block from the Sherman House. By the late 30s, Toffenetti's Triangle Group had expanded to six locations in the Chicago area. All of them served simple, affordable American and European fare.

Editor markup for Toff World's Fair. This is only visible in the story editor.

The Toffenetti restaurant, operated by the same concern that owns the Triangle in Chicago, has no table d'hote. Hot roast ham with sweet potatoes costs 75 cents; hot roast beef, 75 cents, and the same for roast loin of pork. Spaghetti brings 55 cents – a special recipe procured (according to the menu) from "The castle of Count Belveidere."

To capitalize on the popularity of his temporary restaurant in Corona Park, Toffenetti signed the lease on a massive space at the intersection of 43rd Street and Broadway, in the heart of Times Square.

"The Busiest Restaurant on the World's Busiest Corner":

Editor markup for Toff. This is only visible in the story editor.

Toffenetti hired the firm Walker & Gillette to design a modernist, bi-level space with state-of-the-art kitchens that were separated from the dining room by a glass wall, so that diners could see the action. Toffenetti opened on August 7, 1940 with a ribbon cutting ceremony attended by Fiorello LaGuardia's secretary (the mayor had to back out at the last minute). From its inception, Toffenetti in Times Square had seating for 1,000 guests, and served food 24 hours a day.

Editor markup for Toff Menus. This is only visible in the story editor.

All of Toffenetti's restaurants offered simple food at rock-bottom prices. But Dario knew that an average dish could have a lot of appeal if it was marketed to customers in a sensational way. In his book Appetite City, William Gimes notes that as a budding restaurateur, Toffenetti studied the "intricacies of stimulus response" at Northwestern University's School of Commerce. Dario's marketing studies informed the dish descriptions on his menus.

Here are some of the restaurateur's greatest hits:

Hot Roast Sugar Cured Ham: Hickory Flavored. Delightful beyond expression. Toffenetti hams are forever luscious, mild and juicy. Because of the hickory smoking, they have an elusive tempting fragrance and flavor that makes them the King of All Ham.

Cantaloupe a la Duvernoy: A Royal Treat...more toothsome than any exotic delicacy created by continental epicures who indulged the regal appetites of Louis XIV and the French courtiers. Partake and rejoice!

Old Fashioned Strawberry Shortcake: Fresh, luscious, ruby-red strawberries...skillfully prepared in the Toffenetti tradition to enhance their natural succulence...are heaped lavishly over huge, fresh-baked home made biscuits — and topped with an avalanche of whipped cream for your ecstatic enjoyment.

Spaghetti A la Toffenetti with Fresh Meat Sauce: The sauce is made from a treasured recipe of old discovered by Mrs. Tofennetti in the archives among the ruins of the ancient castle of the count of Bonpensler in Bologna.

Hot Baked Idaho Potato: Precious beauty, born of the ashes of extinct volcanoes, brings divine enjoyment, strength to dare and do. Its farinaceous beauty makes life a perfect poem. What a gust of feeling it brings.

Each menu featured a picture of Toffenetti, as well as the encouraging motto, "Your satisfaction is our constant inspiration." 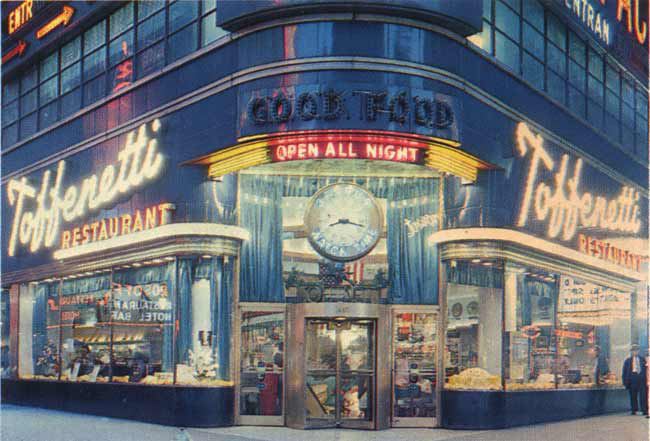 [Toffenetti in the 50s via Lileks]

The press adored Toffenetti from the start, especially the New Yorker editors, who reprinted his flowery prose in the pages of the magazine. The restaurant's clientele was largely made up of tourists and people that worked in Times Square. Although the food was inexpensive, Toffenetti offered a bit of luxury to its guests as well. The space had lavish washrooms, air-conditioned telephone booths, massive chandeliers, an escalator, and walls covered in huge surrealist murals by artist Hugh Troy. For several years, a sign hung in the window that advertised a "Pilgrim's Table," where customers could eat all that they wanted, buffet-style, for $3.95. 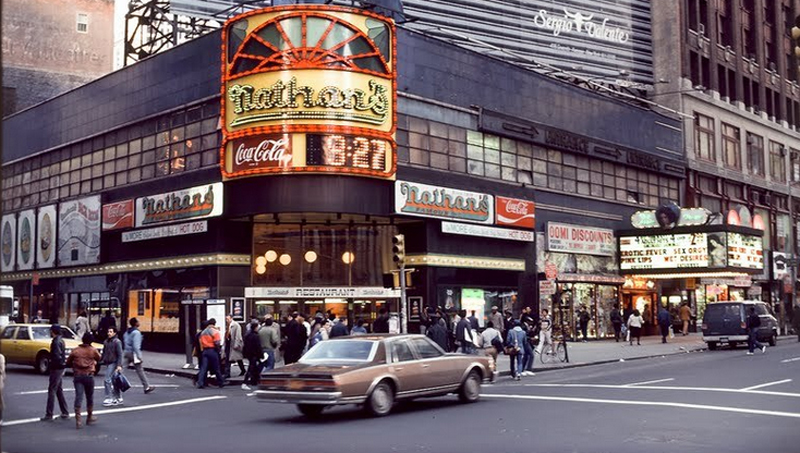 [Nathan's in the old Toffenetti Building via eBay]
Dario died of a stroke in 1962, at the age of 72. At the time of his death, Toffenetti operated six restaurants in Chicago, a hotel and restaurant in St. Petersburg, Florida, and the masive location in Times Square. His son continued to run the empire after his death. But in 1968, Dario Jr. sold the building that housed the Times Square restaurant to Robert Miller and Louis Lefkowitz, who owned the Globe Theater down the block. Toffenetti got $3 million out of the deal.

Although the new owners originally wanted to keep operating a restaurant under the Toffenetti name, they decided to lease the space to Nathan's Famous instead. A month before the restaurant closed, a Toffenetti manager told the Times that the dining room still served 3,000 customers a day. 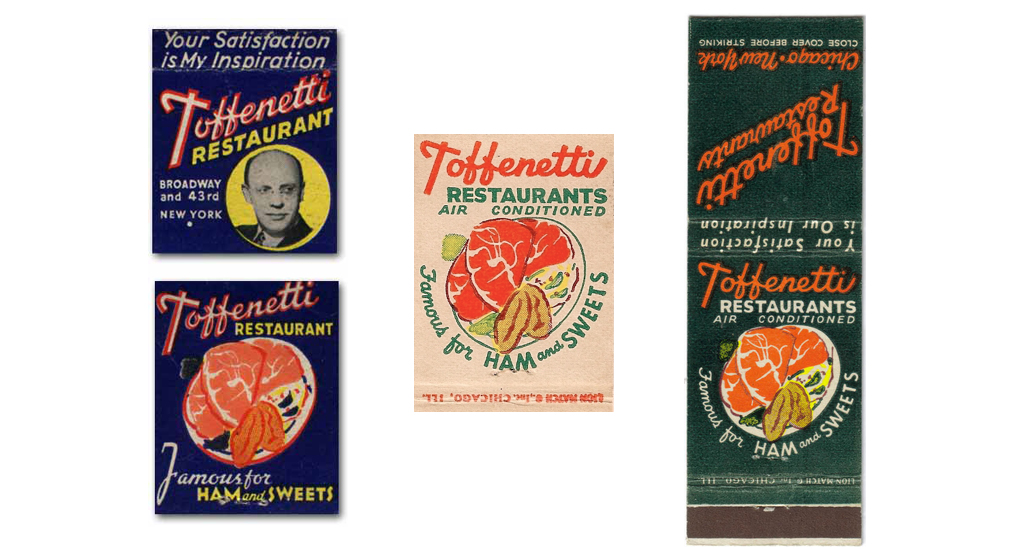 [Matchbooks: blue, beige cover, green]
That old Toffenetti building is completely gone — it was knocked down in the late 90s to make way for 4 Times Square, home of Conde Nast. There are still big restaurants in Times Square that cater to tourists, but they lack the ambition and generous spirit of Dario's place.

Toffenetti was, in every respect, a one-of-a-kind New York restaurant.
· All Coverage of the Restaurants of Old New York [~ENY~]