Share All sharing options for: Pegu Club's Robert Oppenheimer Knows All, Sees All 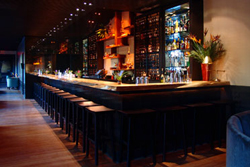 Much has been said of the virtues of a seasoned bartender: the dexterous sort who can labor over a pisco sour, spin a tall tale and pull off the vicious v on the regular.

Less often the subject of nightlife lore is the sentinel floor man—shepherd of the barroom. At Pegu Club, GM Robert Oppenheimer is that guy. You'll notice him: dignified blue suit, heathery hair, arms clasped behind his back, gliding around the place. Tranquil and cool.

You'll definitely notice him eventually. But he noticed you first. He's had eyes on your table (on all of the tables, in fact) all night.

Robert came up as wine director at Raoul's (he calls it "New York's living room"), and he's been at Pegu for only a year. But he was a there when it was still sawdust and pipe dreams—he's Audrey Saunders' best friend, "man of honor" at her wedding. Some might brandish this BFF-with-the-boss-lady intimacy, but Robert's a modest guy: Too busy reminding regulars why they've made a habit of the place and ushering them to their favored perches; committing names and faces to hermetic memory; diagnosing wobbly tables and sending coded gestures to the waitstaff, all while keeping watch on the wash-line of everyone's drink.

Significantly, he remembers how you prefer to make merry, an exigency of the barroom for cyclic drinkers like myself. If you're the kind who doubles down on your first round, then lingers over a second; if you like those drinks to arrive at the table languidly or fast and furious; if the nature of your outing is romantic or friendly or tense or some murky combination thereof.

Robert may not be pouring your drinks, but in his sentry role he is a key factor in how freely you enjoy them. Remember his name.