Share All sharing options for: Dean and Maya Create a Homey Vibe at Jack's Wife Freda 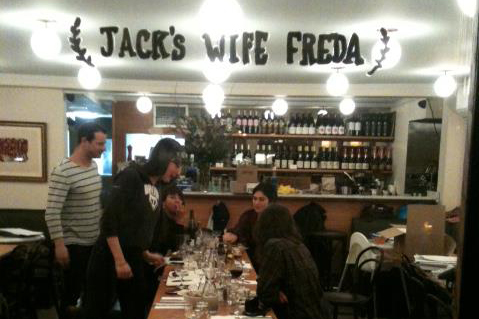 So, a few names came up that I had to eliminate. For example, I don't really see Gabe Stulman working FOH at any of his restaurants these days—blame the sordid task of empire building—but during the early days of Joseph Leonard, I remember thinking that he makes running a restaurant look patently fun, while he's doing it, which makes him either a consummate showman, or a sociopath.

I used to strenuously avoid Diner because the front-of-house were such world-class dicks to everyone, but I was dragged back recently, and besides the fact that their kitchen's firing on all cylinders, their waitstaff did a 180, and it makes all the difference. The problem there: I have no idea who to credit, though maybe Andrew Tarlow figured out you could make more money with less assholes. And I was going to answer "Abbe Diaz" as my quote-unquote "ironic" answer but I'm sure this mention alone will result in psycho-fervor hate postings on some message board, somewhere.

All of which brings me to the actual answer, Dean and Maya Jankelowitz of Jack's Wife Freda.

Maya used to be at Balthazar, normally working as the "good cop" to Kevin King's "bad cop." Maya is a sweetheart. But Dean: He used to be the maitre d' at Schiller's. As it happens, he was also the first guy to both give me a job and fire me in New York City: I had just turned 21 and moved to the city. The girl I was dating then worked at Keith McNally's reservations office, and introduced me to Dean, who in turn took pity on me and gave me a job. Nonshocker: I was a terrible bus boy. Dean had to can me, and by the end of it, I felt terrible for even putting the guy in the position to fire me. That's impressive.

That aside: For the two months I was there, watching Dean manage the crowd at Schiller's in 2005—for all intents and purposes, the best kind of shitshow a guy like Keith McNally could hope for, and the worst kind for anyone in Dean's position—was astounding. He adjusted the lighting every three minutes in the most tiny, unnoticeable of ways, all the way to 2 a.m.. He could get even the most decrepit and impatient of B & T shitheads to smile and nod their heads as he told them there'd be a 90-minute wait — they'd show back up, 90 minutes later, every time. He had a sixth sense for the entire room; he could tell you to the minute when a six-top was going to get up and walk out. And while it's highly unlikely he knew or recognized even a tenth of the people who walked in the door then, it always looked like he did. Dean also has this South African accent that makes everything he says sound like "Happy hour!" or "Mazel tov!" which works to his advantage disconcertingly well. Schiller's was a goddamn circus, and Dean was the box office, ringleader, and lion tamer who kept it from descending into utter chaos.

Now, Dean and Maya have their own place, and all of the touches I once watched Dean exact to a science at Schiller's—a room that at full-steam can feel like a tension rod on the verge of snapping in half—are latent, and embedded in every fiber of it. The pace is smooth, the service is sharp, the music volume, the brightness of the lights, the intensity of the air-conditioning: Whatever it is, it's all good, always, and besides throwing into sharp relief the Sisyphean fucking madness of Schiller's, makes you feel like you are in an extension of their home. Also, Dean might not know everyone who walks in there, but I have no doubt he's making every effort to try to. The thing is: You'll never know either way.