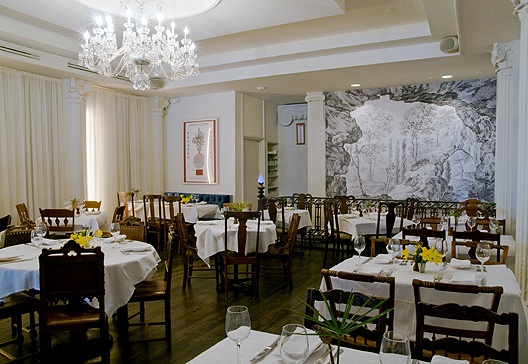 I first started going to Duane Park restaurant almost 10 years ago, back when it was called Duane Park Café and I had a real job. My partner and I would retreat there on Friday nights, charmed by the utter lack of buzz or heat. We didn't have to yell to be heard, the food was reliably good, and our favorite waiter, Jorge, took care of us, except when he'd bring over a free dish of the dreaded strawberry-Champagne sorbet. (Once he discovered how much we hated it, he'd trot it out just to torture us; even now, he'll yell "Sorbet!" from across the room and cackle.)

When the manager of Duane Park Café bought the restaurant, she updated almost everything — and not just the name (dropping the "Café"), but the decor and the menu. She added burlesque shows and other entertainment, which made it less of a refuge for us, at least on the weekends. But it still felt like home, thanks in good part to Jorge, who stayed on. He's an excellent waiter, surveying the room like a hawk, or at least a hawk with an ever-present glimmer of mischief in his eyes.

Whenever we're there, we watch as other diners greet him warmly (and vice versa). We would get a little jealous, or feel a little less special, if he didn't continue to steal a moment to sit next to us and catch up, gossip — denying whatever he said about a patron or a performer as soon as it hit the air — or tell us what we should and shouldn't order.

Even now, after several years of my blogging about Tribeca, Duane Park is the only restaurant where the staff knows me. Despite the burlesque shows, which attract patrons from all over, I think of it as a true neighborhood restaurant, the likes of which are fewer and farther between down here in the land of expense accounts and tasting menus. So you can imagine how many of us in Tribeca felt when we learned that Duane Park is moving to the Bowery later this year. "If the restaurant has to leave," commented one reader on my site, "can we at least keep Jorge???"

Last week, Jorge insisted yet again that my partner and I will come to the restaurant even after its move. "Sure," I said, like I always do. "Once." Then we all laughed and Jorge called me a bitch. I miss him already.