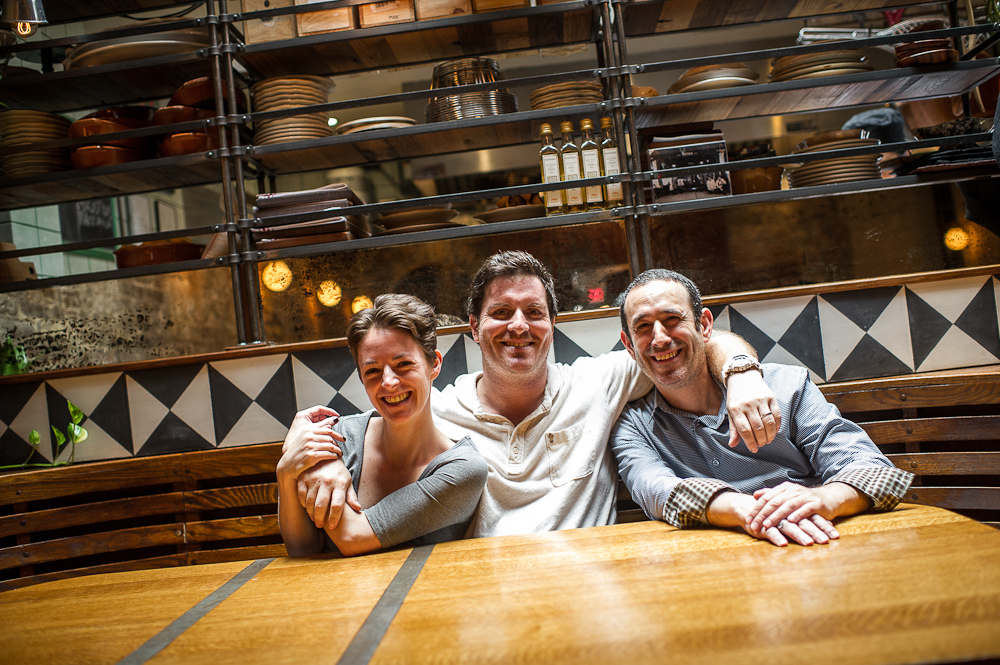 [Pamela Stubbs, Seamus Mullen, and Gil Avital, by Krieger]
One night last fall, four of the city's top critics showed up to chef Seamus Mullen's Spanish restaurant Tertulia, at the same time. That's a nightmare scenario for many restaurateurs, and there were a few kinks that night. But the restaurant quickly found its groove, and the critics loved the place. After a year in business, Tertulia is still one the hottest restaurants in town. Eater recently chatted with Mullen, partner/director of service Gil Avital, and partner Pamela Stubbs about how Tertulia came together over the last year, and what they've got planned next.

Were there any delays with the opening of Tertulia?
Seamus Mullen, chef and owner: For the most part, we were actually remarkably on time. But towards the end, we were all here, on top of the contractors, all the time. We were so overwhelmed with dealing with the build-out and getting the restaurant open that we couldn't even think about how we would be received. It was just like, "Let's get the restaurant open then we'll figure it out."

You opened at the end of the summer. What was that like?
Gil Avital, partner/service director: It's a good time to open a restaurant. A lot of people are out on vacation. You know, by mid-September you should be ready. We were very busy from day one — everyone was waiting to check it out.

Seamus: We killed a few tables. We made the dining room a little bit smaller. And also, it helped that so many of us had worked together before, so we were on the same page. We all share the same values, we all have the same objectives in mind, and we all have each other's best interests in mind. I mean, that's not to say that Gil didn't get completely annoyed with me every other day.

What was the review process like?
Pamela, Stubbs, partner: We got reviewed very quickly. It was like five weeks after opening.

Seamus: Well, the first major review was three weeks in, and then we had one night when we had three critics in at the same time. And...no wait I think we had four. We had four critics in on like a Thursday night, eight o'clock. It was kind of like, "Do the best we can, do what we do, and realistically there's not much more we can do to make everything at the table impeccable." And I think it resonated. Not everyone's going to love what we do, but I think it resonated with a lot of people, and it's certainly been a learning experience. We get better every day.

What did you learn from being put under that kind of scrutiny?
Seamus: Because we all had so much riding on it, so much on the line, we felt the stress that was maybe a little unhealthy, and I think we transferred some of that stress onto our staff. And that was not beneficial. Gil said something to me early on that I think was really smart, and it really helped me. He said, "Listen, it sucks, but we really have to absorb this stress. We can't let this filter through to our staff because they're not going to be able to do their jobs." So, it's our job to kind of shoulder it, and shut up and smile, and take it, and protect our staff from that stress, because otherwise they're going to screw up.

You know, we had a server spill wine on the New York Times food critic, because she was so nervous. This was someone that was very strong, but that stress came from us. We put a lot of pressure on her. And we had to reevaluate. We had to step back and say, "Wait a minute. Let's rethink how we treat food critics when they come in." They're no different from any other guest when they come in, and they're either going like or they're not going like it. But you know, this is what we do. As long as we've done the best we can do, then we can go home proud of what we're doing.

Gil: You know, when Sifton came in and the glass of wine was spilled on his table, I almost looked in his eyes and he was telling us and the staff, "Calm down. It's going to be fine. I don't care what you do, I'm here to enjoy myself." He couldn't say it in words, but I almost felt like that's what he was trying to say.

Seamus I definitely think that a critic's job is to assess a restaurant, and to be as egalitarian and objective as possible. But one of the things that I think is very powerful about this restaurant is that when you come in, everyone that works here really cares about what they do. So regardless, if we make mistakes – which we do all the time – as long as it's coming from a place of real concern and genuine care for our guests, I think people understand that.

The restaurant landed on a lot of "Best of 2011" lists. Was it difficult to keep the balance of being a neighborhood place, and catering to new guests who might have come because of the press?
Pamela: Well, we have a lot of regulars, and we definitely taught the staff to recognize regulars. You know, learn their names, and make them feel as comfortable as possible, even when they walk in the door. And maybe pre-seat them at the bar, do their best to get them a drink, and make sure that they're as comfortable as can be.

Seamus: I used to live in Williamsburg, and there's a restaurant that was right by my house that was the only semi-decent restaurant near where I lived. And I would go there every Sunday for brunch, in the morning on my day off, to the point where I probably ate at this restaurant 35 or 50 times. And every single time I walked in, the same host, who I had seen every day for years, acted like she had never seen me before. I didn't expect any special treatment, or want any free dishes — I could care less about that. But a simple smile and a hello, or even if, like, she had got to know my name? That would've blown me away. But nothing. And because of experiences like that, we try to recognize people that spend time here, and let them know that we appreciate their patronage and their loyalty.

Gil: It's really great to be a restaurant that everybody wants to come to, and that all the celebrities are lining up for. And if you get media to come in, it's really wonderful. But you know what? That lasts what, one year? Maybe two years, if you're lucky? At the end of the day, you are left with the neighborhood. The restaurant has to be built on clientele that comes over and over again. Once a week, twice a week, three times a week: lunch, dinner, bar. And you know, it has to be like that, otherwise you don't survive a year. I mean here we are, at the end of the summer, a new fall is coming, and soon there's going to be new openings. They're going to go to those places. But I think by now, we've established a really strong pull.

Has the menu changed very much since last August?
Seamus: Yeah, it's changed a lot. I think we're really starting to understand our food really well, and also to differentiate our food here from what we did at Boqueria. And it's been a really nice operation. I feel like we get better every day.

Pamela: And one thing I think chef is really good at is introducing new things all the time to the staff to keep them excited. They're the ones here every night selling food to our guests, and we keep changing things up so they have something new and something to talk about and get excited about.

Seamus: You know, if we're not getting better, we're getting worse. That's really it, as far as I'm concerned. We kind of set the bar, and we try to get close to it. Once we get closer to the bar, we raise the bar a little bit more. With everything you do in a restaurant, it takes a lot of diligence, and it takes a lot of editing. We've been harder on ourselves than anybody else could be. Which, you know, it works to our advantage, and it pushes us to be better. We've got some really, really talented, smart, hard-working, dedicated and loyal people working in the kitchen, working on the floor, working in prep, working as dishwashers. We have an amazing staff of people.

Gil: And then we have people who started as dishwashers, and now they're cooking.

Seamus: We've got guys who are very talented cooks. Very, very strong, who started with us, you know, five years ago not knowing the difference between a piece of celery and a carrot. I'm just so impressed. I'm very, very proud of them.

So what's next for you guys? Do you want to open Tertulia somewhere else in the city?
Seamus: This is a special restaurant. We don't want to do five or 63 of them. We certainly want to do other things, but, you know, we want whatever we do to have the same integrity that we have now. And there's no fun in just doing the same thing over and over again. There are things from this restaurant that we'd love to do at other restaurants, but there are also things that we can't do here that we'd like to do elsewhere. One thing that we do want to focus on is Spanish food. I mean, that's what we do — we're not going to open a Cajun barbecue restaurant. There are a lot of other things that we'd like to do, but they'll be different.

Does it feel like it's been a year?
Gil: It feels more to me.

Pamela: Really? I feel like it went so quickly. That's so crazy to me.

Gil: For me, it's the opposite. It feels like I've always been here. And it feels like, "Wow, this is good."

Seamus: I feel like I'm home, you know? Sometimes I feel like it just happened overnight. Any time I'm away from the restaurant and I come back, it feels like I'm home. I want to make sure that, as we grow, that we've always got that feeling when we're in our restaurant. You feel like you're at home.
· All Coverage of Tertulia [~ENY~]