Sherry Basks in the Spotlight at Brooklyn's Palo Cortado

Share All sharing options for: Sherry Basks in the Spotlight at Brooklyn's Palo Cortado 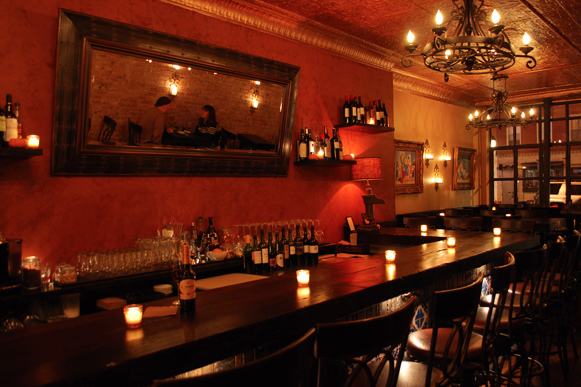 It's not every day that an Italian guy moves to New York to open a Spanish restaurant. But nothing about Sandro Piliego's story is very likely.

Piliego, the owner of Palo Cortado in Carroll Gardens, was born in Ostia Lido on the coast of Lazio, just outside Rome. He moved to the United States in the late 1990s and landed a job at Epcot Center near Orlando, Florida. While he was there he met a guy named Alessio who happened to have a thing for palo cortado—arguably the most sought after style of sherry—during a time when collecting sherry was about as cool as collecting navel fluff. But Alessio, as it turns out, was way ahead of his time.

About five years ago, after decades of being benched alongside the wine world's third string, sherry started to gain momentum. Bartenders from New York to San Francisco started bringing sherry back into their repertoires and the increased visibility of high-quality sherries—like Lustau's Almancenista bottlings, the traditional sherries of El Maestro Sierra, Hidalgo La Gitana's Pastrana and Emilio Hidalgo's La Panesa, as well as the La Bota wines from Equipo Navazos—captured the attention of sommeliers.

By the time Piliego opened Palo Cortado, in 2010, sherry wasn't exactly mainstream, but it was already starting to look as if it might poised for a very unlikely comeback.

"It wasn't easy in the beginning," he says. "But over the past two years things have changed dramatically; now I have people coming in asking for sherry by style or flavor profile."

Piliego has eyes that might as well be emoticons and even though he still hears the inevitable "I thought sherry was for grandmas," several times a night, he maintains the sort of enthusiasm and patience required of someone trying to change a decades-old misconception.

For those with even the slightest interest in sherry, Palo Cortado is the sort of place that can provide you with an education in one evening. A high-quality bottling of nearly every style of sherry, including fino and manzanilla pasada, is available here. And most of them fall between $7-12 per glass, which is a reminder of just one of the many reasons to love sherry: it's cheap.

Beyond the 30 different sherries available by the glass, there's a petite, but terrific list of Spanish wines. The focus is on smaller, less-trodden regions in Spain from grape varieties that don't have quite the same star power as, say, tempranillo. Here you will find a strong selection of reds from the Canary Islands as well as even more unlikely bottlings like Pedralonga's delicious blend of mencia, caiño, and espadeiro from Rias Biaxas or Preto's 100 percent prieto picudo from Tierras de Leon. Most of the wines on the list hang in the mid to high $40 range and wear, just like the sherries, very slim markups.

(By the way, if you're wondering, Alessio went on become a brewer in Brazil before moving to Turkey where, Piliego jokes, "He's probably making raki.")

Piliego acknowledges that his decision to open Palo Cortado was a passionate gamble, and if you ask him why, exactly, he decided to throw all of his chips in on a concept that was way outside of his comfort zone—he'll tell you, plainly, "For the love of sherry."

Bang For Your Buck (All sherry is priced by the glass)
MANZANILLA LA GUITA, Hijos de Rainera Pérez Marín, Sanlucar $7
This is about as good an introduction as you can get to manzanilla. Classic, briney, floral, and slightly herbal with that trademark manzanilla tang on the palate. This comes from a small bodega that has been the source for the manzanilla pasada bottlings from cult producer Equipo Navazos.

MANZANILLA EN RAMA I THINK, Equipo Navazos, Sanlucar 10
This is sort of a La Bota light, an entry-level bottling from Equipo Navazos behind the rare La Bota sherries. They are a negociant of sorts that selects the best butt(s) from legendary houses like Pérez Marín, Valdespino and Sanchez Ayala and bottles very small quantities for the market. The I Think (an homage to Darwin) is the most affordable of their offerings. It spends 4 ½ years under flor and is slightly richer and more oxidative than your average manzanilla. It is bottled "en rama" or very lightly filtered.

MANZANILLA PASADA PASTRANA, Hidalgo-La Gitana, Sanlucar 9
This is one of Hidalgo's most provocative sherries, from one of their top vineyard sites, Pastrana. It's aged under flor for 12 years and is the last stop on the manzanilla ? amontillado journey. It is more or less the grown up, far more complex version of Hidalgo's famed Manzanilla La Gitana. It's only lightly filtered and turned up to ten aromatically. Nutty, salty, olive-y awesomeness. Foolproof with cured meats.

FINO, César Florido, Chipiona 8
Chipiona is a small town located south of the more famous village of Sanlúcar de Barrameda (where manzanilla coms from). Much of the production in this town is dedicated to moscatel and it is rarely mentioned as a town capable of producing fine fino sherry. Cesar Florido is one of just two producers bottling under their own label (at one time there were more than 80) and he happens to make truly stunning fino. Lean and light, closer to the manzanilla in style, floral, earthy, and herbal.

FINO LA PANESA, Emilio Hidalgo, Jerez 12
This is one of the most singular sherries on the market right now, bottled from the best barrels from Hidalgos basic fino solera. The wine is then aged under a layer of for 15 years (practically a century for flor, which tends to die off much sooner). It's more or less a fino pasada, or an old fino, so the color is darker and the flavors more intense. This is dense, powerful fino that is really unlike anything else out there.

AMONTILLADO VORS 30YRS, Bodegas Tradicion, Jerez 19
VORS means Very Old Rare Sherry, and is a designation that many of the most intense amontillados, palo cortados, and olorosos bear. In order to wear the designation the wine must be aged a minimum of 30 years in the solera before it's bottled. Many of these wines come from soleras, like this one, started in the 19th century. Despite its dark brown color and its age this is still showing lots of fresh, salty, lifted flor character mixed with spice dried fruit, and musk. There is a tingle of sweetness on the palate, but totally dry on the finish. Truly awesome, vibrant amontillado that isn't cheap by the glass, but still a deal considering the bottle will run you close to $100.

OLOROSO 15YRS, El Maestro Sierra, Jerez 11
Olorosos is a style of sherry in which flor never develops. So, this is purely and oxidative wine that's spent 15 years in the solera. It has that classic oloroso yin and yang of nutty, caramelly sweetness on the palate and dry, spicy finish. Great, classic example of the style.

PALO CORTADO MARQUES DE RODIL, Emilio Hidalgo, Jerez 12
Palo cortado is a blurry category and one that varies from bodega to bodega. It's generally a wine that starts out ageing like a fino, but the flor dies of early and the wine starts ageing like and oloroso. So it's a glorious accident of sorts. Generally, though they can range drastically, they generally have the aromatics of oloroso with the texture and lightness of amontillado. So, it's a hybrid and a very rare one at that. This particular palo cortado is lighter than most, colored almost like a cross between an amontillado and a fino pasada, with a pretty pronounced yeasty, funky flor character. Like diet palo cortado. Major value.

ALBARIÑO SAIAR 2010, Benito Santos, Rias Baixas 44
The entry-level albariño from one of the original growers in Rias Biaxas. All of the grapes are farmed organically and the techniques are traditional. From 2009 this wine fines a nice balance between rich, forward fruit and the sort of high acid characteristic of albariño grown in its spiritual home.

VINYES ARRANCADES 2007 (100% Macabeo), Mendall, Terra Alta 51
This is not for the Cuozzo's out there. This is orange and funky, showing more savory flavors than fruit. Sourced from 100-year-old macabeo vines. In keeping with the theme at palo cortado, during the 2007 vintage flor, the same yeast layer that forms in Sherry, spontaneously developed on this wine. It's salty with the sort of tang that's associated with sous voile (wine aged under flor) wines from the Jura and, of course, Sherry.

DOUMIA 2007 (70% Mencia, 20% Caiño, 10% Espadeiro), Pedralonga, Rias Baixas 48
One of the most exciting red wines out of Spain. Pedralonga is known for their albarinos (it is Rias Biaxas after all), but produce this red from local varieties. Bright, floral, peppery and juicy. Complex, but slammable.

TRADICIONAL 2009 (50% Listan Negro, 50% Tintilla), Frontón de Oro, Gran Canaria 48
One of the best value, consistently, out of the Canary Islands. A blend of the two main grape varieties grown in the islands. This comes from high elevation, terraced vineyards (many more than 3,200 feet) on the largest island in the chain, Gran Canaria. It's raised in neutral barrels for three months before several years in bottle. It's spicy, elegant, and floral with plenty of blue and red fruit.

Off The Beaten Path
PRIETO PICUDO 2009, Preto, Tierras de Leon 46
Prieto Picudo is an ancient variety that – with less than 100 hectares under cultvation – is nearing extinction. This comes from an area just east of Bierzo. The vines average about 20 years old and the wine is aged in used barrique. Meaty, full, big wine that is still very fresh despite its richness.

Crowd Pleaser
SELECCIO' 2011 (40% Parellada, 30% Macabeo, 20% Chardonnay, 10% Malvasia), Can Feixes, Penedès 42
This is always a solid wine, sourced from high-altitude vineyards from a mix of indigenous and international varieties. Plenty of dense, spicy fruit on the palate, great acidity, and tons of floral and herbal aromas.

Under $40
MALVAR 2008, Bodegas Jesus Diaz, Madrid 32
This is produced from 100% malvar, a grape grown exclusively in the DO of Madrid. Sourced from 50-60-year-old vines situated at around 2,200 feet above sea level. Not a super complex wine, but a very enjoyable one that drinks above it's price point. Big tropical fruit with enough acid to prop it up.

CONO 4 2010 (100% Monastrell), Primitivo Quiles, Alicante 38
Classic Alicante sourced from low-yielding monastrell (mourvèdre in French) vines and vinified in 80-year-old oak barrels and made in a slightly oxidative style, which makes for an interesting tangle of bright red fruit and warmer, spicy flavors.

Break The Bank
There is really only one wine available on the top end, spend your money on sherry.

WTF
Move along, nothing to scoff at here.
· All Editions of Decanted [~ENY~]
[Photo]