Fall is absolutely the most exciting time to be a diner in New York City. Here's a guide to everything you need to know about the big fall openings this year.

15) Midtown: Bill's
Address: 57 East 54th St.
Major Players: John DeLucie, Jason Hall
The Situation: Chef/restaurateur John DeLucie is converting the former Bill's Gay Nineties space into an American bar and grill called, simply, "Bill's." The restaurant will feature a bar room downstairs, and a dining room upstairs. The owners of the original Bill's carted off most of the cherished relics that filled the space, but the new restaurant will have a few of the design elements from the original. DeLucie recently noted, "[W]e plan this to be more of a restoration than a renovation to keep the spirit of the place.” Jason Hall, who is also the chef de cuisine at Crown, will helm the kitchen here.
Projected Opening: Second week of September
[All Coverage of Bill's] 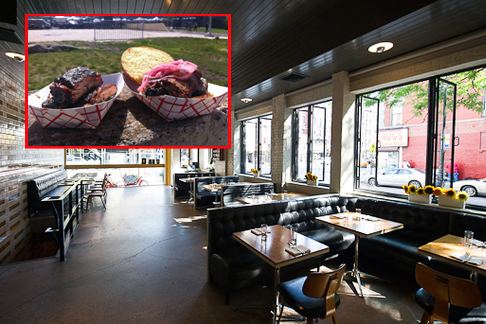 14) East Village: Mighty Quinn's
Address: 103 2nd Ave.
Major Players: Hugh Magnum
The Situation: One of the most beloved Smorgasburg stands is making the jump to Manhattan. Chef Hugh Mangum's affordable barbecue restaurant will occupy the Second Avenue space that formerly housed Vandaag, Bounce Deuce, and Smoked. The menu will feature five or six main meats, as well as classic barbecue side dishes. If Magnum can deliver the same smoked brisket that he serves on the Williamsburg waterfront, he will have a very big hit on his hands.
Projected Opening: Mid-November
[All Coverage of Mighty Quinn's] 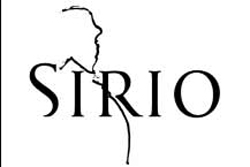 13) Upper East Side: Sirio
Address: 2 East 61st St.
The Players: Sirio Maccioni
The Situation: Legendary restaurateur Sirio Maccioni will bring a version of his Las Vegas Italian restaurant to the former Le Caprice space in the Pierre Hotel. Adam Tihany is designing a retro space that will include vintage photos of Maccioni with his famous clientele. Sirio and his posse were recently in Italy doing research for the new menu, which will focus on the food of Tuscany.
Projected Opening: Third week of September
[All Coverage of Sirio] 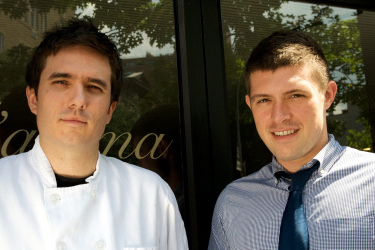 12) East Village: L'Apicio
Address: 13 East 1st St.
The Players: Joe Campanale, Gabe Thompson
The Situation: Next month, restaurateur Joe Campanale and chef Gabe Thompson will open their first East Village project, L'Apicio, in the First Street space that formerly housed Bowery Wine Co. Thompson will create an "Italian-inspired" menu, and Campanale will write the wine and cocktail lists. It basically sounds like a restaurant in the style of their West Village hits L'Artusi, Dell'Anima, and Anfora. If they nail the space here, this could be a killer date night spot.
Projected Opening: Third week in September 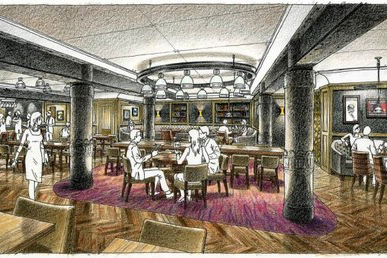 10) Upper East Side: Salumeria Rosi
Address: 903 Madison Ave.
The Players: Cesare Casella, Dante Ferretti
The Situation: Next month, Cesare Casella will open a slightly more refined version of his popular Italian restaurant, in a space on Madison Avenue. This is Cesare's chance to show that his rustic, aggressively flavorful fare translates to a semi-fine dining setting. The dining room is being created by Martin Scorcese's
production designer, Dante Ferretti.
Projected Opening: Third week in September
[All Coverage of Salumeria Rosi UES] 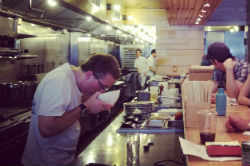 9) Downtown: Ivan Ramen
Address: None yet
The Players: Ivan Orkin
The Situation: American-born ramen guru Ivan Orkin will open his first NYC restaurant later this year. Orkin, who owns a string of restaurants in Japan, cooked some of his dishes at Momofuku Noodle Bar earlier this summer, and the line literally stretched down the block and around the corner. The chef/restaurateur hasn't revealed the address or even the neighborhood where he plans to open his new project, but it's definitely happening somewhere downtown this fall.
Projected Opening: December

8) Carroll Gardens: Nightingale 9
Address: 345 Smith St.
The Players: Robert Newton and Kerry Diamond
The Situation: This fall, Robert Newton and Kerry Diamond will open their Vietnamese restaurant Nightingale 9 in a space directly across the street from Smith Canteen. Diamond and Newton both recently traveled to Vietnam to learn more about the cuisine. Over the last two years, Seersucker has matured into a really great restaurant, so it will be exciting to see what Diamond and Newton do next.
Projected Opening: Early November 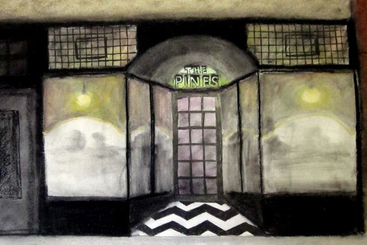 7) Gowanus: The Pines
Address: 284 Third Ave.
The Players: Aaron Lefkove, Andy Curtin, Angelo Romano
The Situation: The dudes behind Gowanus favorite Littleneck are expanding down the block with a brand new concept called The Pines. They've tapped a talented chef here: Angelo Romano, formerly of Roberta's, Lupa, and the dearly departed Masten Lake in Williamsburg. Earlier this year, restaurateur Aaron Lefkove told Eater that if Littleneck is "of the sea," The Pines will be "of the land."
Projected Opening: Last week in September
[All Coverage of The Pines] 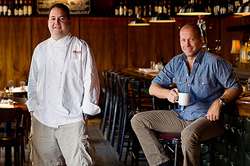 6) West Village: El Toro Blanco
Address: 10 Downing St.
The Players: John McDonald, Josh Pickard, Josh Capon, Scott Linquist
The Situation: The boys from Lure and B & B are venturing out of Soho or their new project. Next month, John McDonald and Josh Pickard will open El Toro Blanco, a modern Mexican restaurant, in the space that formerly housed Scuderia. Chef Josh Capon will oversee the food program, and former Dos Caminos chef Scott Linquist will also work on the menu. These guys always create cool, comfortable spaces with great bar scenes, so this promises to be a fun opening.
Projected Opening: Last week in September
[All Coverage of El Toro Blanco] 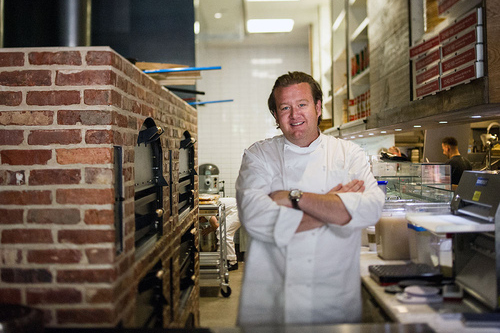 5) Tribeca: The Butterfly
Address: 225 West Broadway
The Players: Michael White, Eben Freeman
The Situation: There are two exciting things about the Butterfly: 1) Michael White will be trying his hand at American cuisine. 2) After several years working behind-the-scenes, cocktail guru Eben Freeman will return to making cocktails. Following the rocky opening of Nicoletta, this is White's chance to wow New Yorkers once again. Note: White's next project after The Butterfly, Ristorante Morini, won't open till next year.
Projected Opening: Mid-October
[All Coverage of The Butterfly]

4) West Village: Untitled Gabe Stulman Project:
Address: 183 W 10th St.
The Players: Gabe Stulman
The Situation: West Village restaurateur Gabe Stulman will expand his Little Wisco empire this fall with the opening of a new Japanese project in the former I Tre Merli space on West 4th Street. Back in June, Stulman told the CB2, "What we want to put here is our very inauthentic take on a Japanese Izakaya." No word yet on who Stulman will tap to helm the kitchen, but the restaurateur has a gift for finding the right chef for the right project (see: Fedora, Perla, Joseph Leonard). This will be a small restaurant, with about 30 seats.
Projected Opening: December
[All Coverage of Gabe Stulman]

3) West Village: The Beatrice Inn
Address: 285 West 12th St.
The Players: Graydon Carter, Emil Varda, Brian Nasworthy
The Situation: Graydon Carter's revamp of the Beatrice Inn will feature a menu of classic chophouse fare from former Per Se sous chef Brian Nasworthy. Carter recently told the New York Times: "There’s no good chophouse in this part of town...I live here and it’s something I want." The space will feature a clean new look, complete with an airy back room lined with banquettes. Carter and partner Emil Varda have made it very clear that this will be a democratic restaurant, with a listed phone number and an OpenTable page.
Projected Opening: Second week in September
[All Coverage of The Beatrice Inn] 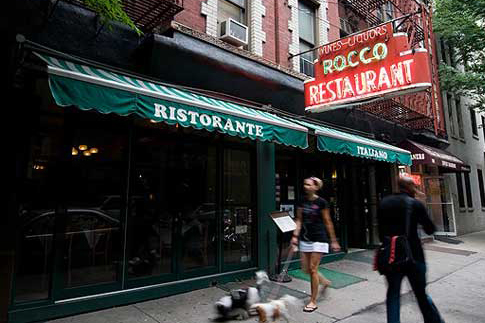 2) Greenwich Village: Carbone
Address: 181 Thompson St.
The Players: Mario Carbone, Rich Torrisi, Jeff Zalaznick
The Situation: The new Torrisi spinoff in the old Rocco space officially has a name: Carbone. Progress has been slow on the space, which Mario, Rich, and Jeff secured last fall. But by the end of the year, they will open their own version of a slightly upscale, old-school Italian restaurant. Expect linguine with clams, octopus pizzaiola, a whole duck, and lobster served three ways.
Projected Opening Date: The week before Thanksgiving
[All Coverage of Carbone] 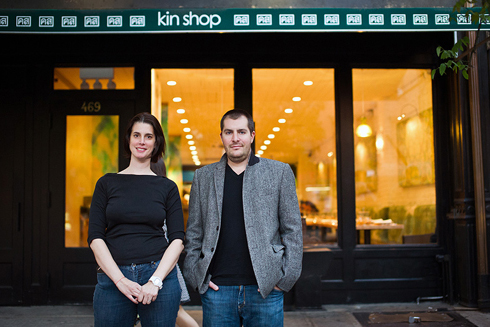 1) West Village: The Marrow
Address: 99 Bank St.
The Situation: From the people that brought you Perilla and Kin Shop comes a West Village European restaurant by the name of The Marrow. (You might want to write that one down.) The Marrow was originally slated to open in Downtown Brooklyn last winter, but Harold Dieterle and Alicia Nosenzo scrapped their plans for the Hotel 718, and set their sights on the former Paris Commune space on Bank Street. The Marrow will serve food inspired by Italy and Germany, including steaks, ostrich schnitzel, and bison carpaccio. Dieterle and Nosenzo create the kind of places that are great for both special occasions and casual weeknight dining. The way things are shaping up, The Marrow has the potential to be the most exciting Fall opening of 2012.
Projected Opening: Mid-November
[All Coverage of The Marrow] 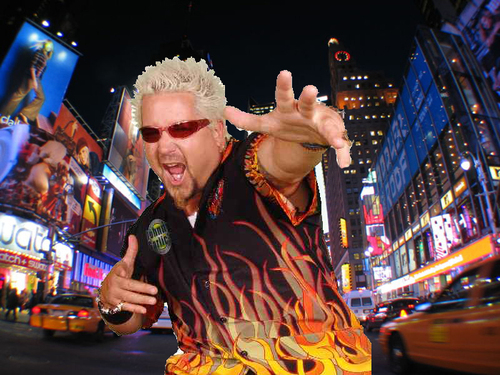 Honorable Mention: Guy's American Kitchen & Bar: Although New Yorkers will avoid this restaurant like the plague, this will probably be one of the most popular new restaurants in NYC. Remember: it's in Times Square, and tourists love the Human Lava Lamp. The menu will be a mix of Fieri's two other concepts, Johnny Garlic's (serving American WTF fare) and Tex Wasabi's (serving American WTF fare + sushi). The space will seat 500, and everything will be smothered with smoky Louisiana-style wasabi butter. Hopefully, the critics won't shy away from this one. [All Coverage of Guy's American Kitchen & Bar]

Also of Note: Masa Takayama is currently gearing up for the opening of his Tribeca Teppanyaki restaurant Tetsu (don't be surprised if this one gets pushed back till winter 2013). In October, the Edi & the Wolf team will open a retro cocktail bar called The Third Man. Next month, Sara Jenkins will debut Porsena Extra-Bar, right next door to Porsena. Marcus Samuelsson will open a 75 seat cafe in Alice Tully Hall before the end of the year called American Table Cafe and Bar by Marcus Samuelsson. This fall, Matthew Lightner will open a bar area below his fine dining hit, Atera. The M. Wells team will (hopefully, fingers crossed) open M. Wells Dinette in MOMA P.S. 1 before January. And Masaharu Morimoto's long-delayed American project Tribeca Canvas is now on track for an October opening.