Share All sharing options for: The MePa Triple Threat: Toy, Ryu, and MPD

Last Tuesday, a group of Eater editors attempted to dine at three Meatpacking District restaurants — Toy, Ryu, and MPD — in one night. What follows is an account of this epic MePa restaurant crawl.

Spoiler alert: at least one of these restaurants is a total shitshow.

TOY:
EaterGM: You should listen to this song while you read the review of Toy. It played three times in the hour we were there:

EaterGM: The dining room looks like a Nintendo store. Last Tuesday, both floors were completely empty, but there was a decent crowd outside. All the servers here have to wear at least one neon accessory.

EaterAH: There was a large, gaping hole by the front door. Always fun. The crazy, two story, diaphanous screen with the image of a tattooed woman was partially obscured from where I sat, making it look like she was being eaten by a dragon.

EaterSS: I was late getting to Toy, but despite being anxious to find the table, the in-your-face silk screens threw me for a loop and added about thee minutes to my search.

EaterGM: Our drinks took 25 minutes, because, as the waitress explained, a glass broke at the bar, and they wanted to make sure there were no shards of glass in our drinks.

EaterSS: Everyone seemed concerned that getting my drink would take forever, so I was in a hurry to pick out something that mixed elements of drinks I like (whiskey), with things that I don’t like (lychee). When I spotted the Tranzformer, it combined both of those elements with a name that used a z instead of an s. Sold!

EaterAH: I got the Mango Pez ($15)--Bacardi, mango, prosecco, all things I like and that belong together.

EaterSS: It’s always a great feeling when you open a menu and know right away that you aren’t interested in ordering anything. That’s Toy. The concept seems to be Sushi Samba meets Momofuku meets nightlife. GOLD!

EaterSS: Our server seemed attentive and knowledgeable about the menu, without a lot of upsell effort. Going for her recommendations was an obvious move. These are the items that the kitchen must bang out on a regular basis.

EaterAH: The shrimp toast cigar ($14 for four or five) is kind of a cool idea I guess, but it's nasty. Pink shrimp sludge inside a crispy fried layer. Gross.

EaterSS: I’m not sure how they can get shrimp to be solid and in that shape. The combination of that texture, color and flavor made this a one bite wonder. Not good from a two bite app.

EaterGM: This is like a modern classic shitshow dish.

EaterSS: Despite everyone else’s opinion, the sushi was gross.

EaterAH: The spicy beef and scallion dumplings ($14) were perfectly unobjectionable. But the peking duck — oh, peking duck, what the fuck. $70 for a small section of duck — sliced — that felt and tasted like slightly-more-flavorful chicken breast.

EaterSS: The Peking duck looked very unimpressive for $70, but it looked like Peking duck. The taste was not peking duck though.

EaterGM: I think they might have sliced one duck breast into many pieces, and stole some skin from the weird part of the duck that nobody eats, then scattered it on top.

EaterSS: As the ice melted, the Tranzformer tranzformed into a drink that was pretty gross. I needed something else. They had shochu cocktails, so I decided to go with just a glass and some ice water, Japanese style. When in the MePa...The shochu was a strange shade of green. It looked like the vodka and Scope from Toy Soldiers, which is a highly underappreciated film. It tasted like a kamikaze shot. Then the waitress had disappeared, turning a few rounds of drinks and apps into a 2 hour ordeal. The soundtrack was on repeat and it was really time to get out of there.

EaterAH: This is essentially how I think the wait for the check went: "Okay, so check time. Check please. No really, the check. Where did she go? Where is the check? Hello, kind lady who works here, can we get our check whenever you have the chance? Oh, she doesn't care. Oh god, we still have two more restaurants to get to. How long have we been waiting? It's well over 30 minutes now, sitting here with empty plates and empty glasses and no check. Oh dear god. Okay, here she is. Yes, just the check please. "

EaterGM: The banquettes are so high that the people in the middle of the table can't scope out any of the action in the room. Not what you want at a place like this.

EaterAH: Even before we got any food, I felt like I was going to puke every time I took a sip of water. It's like I got rabies as soon as we got in and I couldn't take in water. Though really I think it was a combination of the music being so loud, the booth being so cramped, the seat being so uncomfortable, the lighting being so weird, and the room being so fucking hot. What a terrible space.

EaterSS: It was another menu full of things that I wouldn’t want to order. Also, the music was really, really bad. YES mixed with EDM mixed with Yani. It was also aggressively warm in there, like a very bad subway car.

EaterGM: And so yellow in there.

EaterSS: Greg kept mentioning the Fatty Crew, but it seemed like they just took another menu from some crappy Japanese restaurant and changed the names of the dishes.

EaterAH: The pork "sliders" ($12 for 2) were silly. Just silly. Pork tontaksu on wonder bread with an off-tasting slaw. I didn't find them as awful as Scott did, but they were pretty bad.

EaterSS: I didn’t really care what anyone ordered because I didn’t want to eat any of it. I actually chose the pork buns though, because it would be great to see how Ryu’s pork bun lined up against the other great ones. The picture should say it all, but it burned my throat with an awkward sourness on its way down. I thought I would throw up, but I managed to hold it in. The taste lingered though.

EaterGM: Yeah, the sliders were bad. This is what you imagine a gym sock tastes like.

EaterSS: I kept staring at this couple across from us that looked like they were on a date. Who would ever pick RYU for a date? Wouldn’t you immediately rule out any sort of relationship with that person? I would.

EaterAH: And those skewers--one of the nastiest things I've ever been near. Chewy bacon wrapped around mochi, on a stick ($10 for 2)? Awful. The chicken meatball skewers ($12) were a slight redemption, but only slight.

EaterGM: I kind of liked the bacon-wrapped mochi, but I know that my tablemates did not.

EaterSS: I usually hate mochi, so combining bacon with it basically ruined bacon for me.

EaterSS: The combination of the heat, music, vertigo and pork bun sourness left me in a freak out condition. I needed to escape, but considering we were smack in the middle of the MePa, where to?

MPD:
EaterGM: After Ryu, we shuffled down the street to MPD, fully expecting to get more food and at least one drink. Then we saw this: 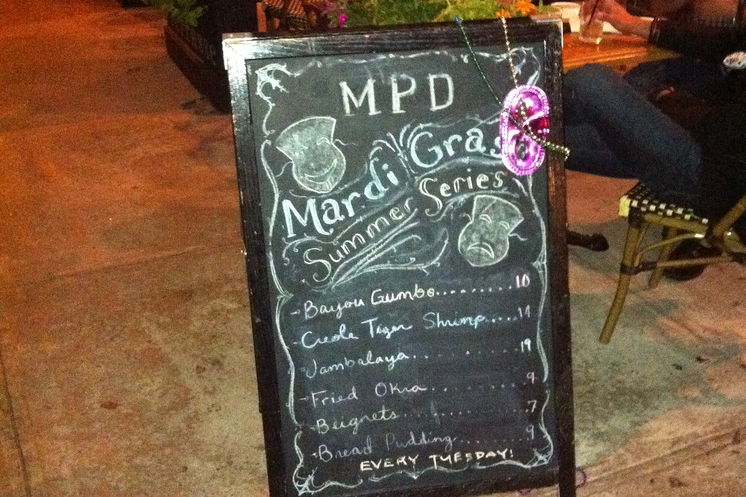 EaterSS: Mardi Gras Tuesdays in the summer? That was a real head scratcher

EaterGM: All the servers inside were wearing Mardi Gras beads. The dining room was completely empty, but the bar was slammed. We decided to give up and go home.

EaterSS: The Ryu experience had me pretty drained. I was really happy when everyone else elected not to sit.

EaterGM: So let's get down to the verdict. Toy is a lame restaurant, but it's not a shitshow. This place is harmless, and it will probably morph into another entirely different concept by this time next year. Ryu, on the other hand, is a bona fide shitshow. MPD was spared this go-round. Perhaps we'll have to revisit in 2013, if the Meatpacking District hasn't detached from the rest of Manhattan and floated off into the Atlantic by then.
· All Coverage of Shitshow Week [~ENY~]