Before we get to the matter of shitshow/non shitshow, let's make one thing clear: Brasserie Pushkin is a very silly restaurant. The menu looks like an old-timey newspaper. The walls above the urinals are covered in gold. The Caesar salad is served piece by piece, like a Luger porterhouse. The menu includes a $26 version of the KFC Double Down. And almost every dessert is set on fire, or served on a bed of dry ice.

On an August Saturday night at 9 p.m, the place was packed.

A bit of background: Brasserie Pushkin is the first NYC outpost of an opulent Russian restaurant chain that is apparently very popular with well-to-do Muscovites. It opened about six months ago. During my meal there, about 80 percent of the diners were speaking Russian.

Decor: Every surface here is covered in gold, velvet, marble, or sculpted curlicues.

Vibe: The dining room has a slightly nervous energy — a lot of customers coming and going, and waiters rushing over to tables with bottles of Champagne. Russian Cat Power on the stereo, deep cushions on the banquettes, battery-powered candelabras on the tables.

Food: Not one of Brasserie Pushkin's strong suits. The pierogies, beef Stroganoff, chicken Kiev lollipops, and desserts were all duds. The salad (which came with the lollipops) was actually very good. But the big surprise of the night was the $26 veal & chicken burger "Pojarsky." 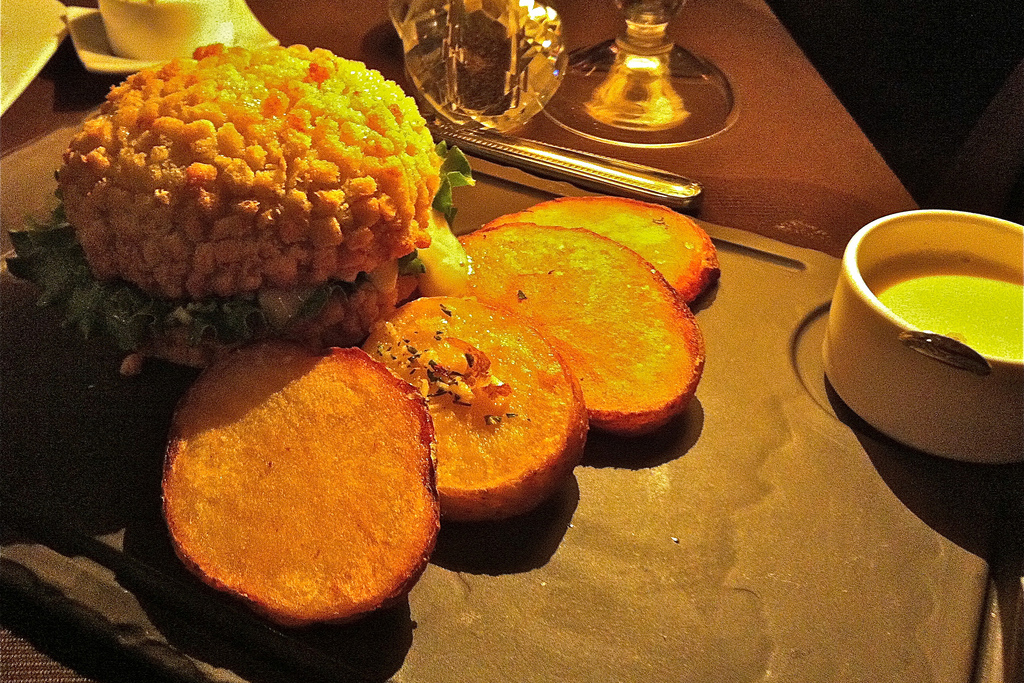 The veal and chicken cakes were hot, heavy, and incredibly moist, like two waterlogged sponges that had been zapped in the microwave. Dare food.

Service: Although our waiter never missed an opportunity for an upsell, he was attentive and friendly. The courses were evenly paced, and the drinks came quickly.

Crowd: A few big families celebrating special occasions, and lots of professional-types on dates. One woman was wearing a dress that had tigers on it.

WTF: On the way down to the bathroom, the door to the kitchen swung open, and I heard a man giggling wildly, like he was being tickled.

The Verdict: Brasserie Pushkin is a goofy, expensive restaurant that serves New York’s worst burger, but it ain’t no shitshow. The Push exists solely for the expats that know and love the original, and they seem to be very happy with the NYC operation. But if you want to drop some coin at an over-the-top Russian restaurant, you’re better off at The Russian Tea Room. The food is also lousy there, but at least that place is a proper spectacle.