Justin Warner on Working at a Sushi Shitshow

Share All sharing options for: Justin Warner on Working at a Sushi Shitshow

All throughout Shitshow Week 2012, restaurant industry professionals will be sharing stories about working in shitshows, and the shitshow moments that they've experienced in otherwise solid establishments. Up first: Justin Warner, the proprietor of Do or Dine, and winner of Food Network Star Season 8. 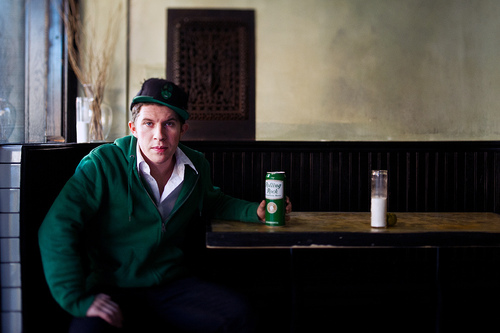 The first job I applied for in New York was at a "sushi" joint near Columbus Circle. I was such a noob that I was convinced that there were no bad restaurants in NYC and that being close to the Time-Warner Center was divine providence or something. I showed up for an interview wearing a suit and tie that I had purchased for $15 at the Goodwill on Fulton Street in Bed-Stuy. I had applied for a server position but was interviewed for a management position for some reason. When I politely told them that I was really only comfortable serving they asked when I could start and stupidly I said "as soon as possible." They told me to come back in two hours. I was freaking amped, all calling my mom and stuff, thinking things like "Yeah, big city moves so fast I got a job in two hours. Yeah, yeah!"

I showed back up in an hour and 50 minutes for a tour of the restaurant. Nobody acknowledged my friendly Konnichiwa (because nobody spoke Japanese). I saw a nice young waitress operating the fryer. "Family meal?" I asked... nah, she was making desserts. What? For whom? For the customers. Yes, at this place the servers had to make caramel and tempura fry bananas and microwave molten chocolate cake and dust them with powdered sugar and garnish with a single raspberry and a mint leaf. I was temporarily okay with this. Then some waiter came back asking where his table's order was... the manager said that the sushi men were swamped with to-go orders. The idea of working at a sushi restaurant that nobody cares to visit was pretty unsettling.

Then came the barista lesson. I was absolutely petrified at this point because sushi and coffee is a big time no-no in my book, let alone iced mochas. The manager led me through a narrow corridor piled with boxes to what looked like a portal into a bodega. We entered the hole and indeed found ourselves in a bodega, where I was instructed on the art of making frozen coffee drinks. The guy at the register in the bodega looked at me and laughed. I thought I was going to cry.

Then came service, in which customers actually appeared at the restaurant. The majority came for cocktails and then left. I got to bartend. Then someone spilled miso soup on a customer and the customer ran up to me demanding a refund, because I was wearing a tie from the Goodwill. Then a customer ordered 24 pieces of "white tuna," which is not tuna at all, but escolar, which causes keriorrhea.