Seeking the Unlikely in Talde's List of Likely Wines 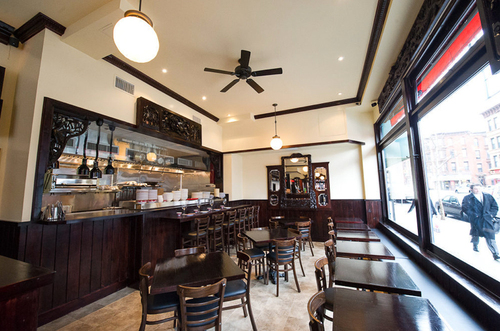 Talde's wine director David Massoni is not convinced that Brooklyn is the place to push boundaries. In fact, after two years in Park Slope, he's decided that in Brooklyn people want precisely the opposite.

"People come home from work in Brooklyn and they want things to be a bit easier," he says. "If they are at a place like Marea they might be open to Francesco Grosso introducing them to a wine that only five other people have ever had. But here they want to be comfortable and they don't want to stretch their pocketbooks."

The wine list at Talde is not just Massoni's interpretation of what goes well with Dale Talde's Asian-American food, but his idea of what people in his neighborhood want to experience.

"Esoteric wines don't sell," he says. "Would they sell if I spent more time? Maybe. But with a menu like Talde's people already have to push themselves outside of their comfort zone; I want to present something they're comfortable with."

Some might call that safe, others hospitable. If the hornet's nest around Cuozzo's wine list rant is an indication of anything, it's that there are very different interpretations of what makes a wine list successful. I, for one, don't believe that the wine list should play it safe so the food doesn't have to. With a smart staff, there is room for adventure on both fronts.

But that's not to say that there isn't any virtue in being agreeable. I may not concur with Massoni's reasoning, but he has managed to put together a list that does have a little something for everyone and, if you stick close to Italy, a potentially unique food and wine experience.

Massoni comes to Talde with around 10 years of experience with Italian wine. He worked under Joe Bastianich and Mario Batali at both Otto and Babbo and went on to work as the GM at 'inoteca before opening Thistle Hill Tavern a few blocks south of Talde in 2010. Not surprisingly, the Italian portion of this list is its strongest section by a mile. There is a small mix of regional wines from Valle d'Aosta all the way down to Sicily, but Tuscany and Piedmont form the meat. Here Massoni shows a preference for more modern riffs from the likes of Domenico Clerico and Le Macchiole — both terrific producers if you're looking for a bit more girth from your reds.

The whites section is long on the Finger Lakes, but strongest again in Italy, with a nice mix of regional whites. France comes in second with a few interesting choices from both the Loire and Chablis. One might expect a strong showing of German and Austrian riesling with this cuisine, but only one—a Leitz Spatlese from 2010—makes the list.

But Massoni doesn't approach pairing wine with Asian food quite like most. He is convinced that despite the fact that Riesling (often with a touch of residual sugar) and Asian food is the go-to pairing, Italian wines are actually better suited to this sort of cuisine.

"Both cuisines [Italian and Asian] are high spice, high acid, high heat," he says. "And the Italians were doing umami before everyone started talking about umami."

In other words, in his mind there are notable similarities in the fundamental flavor combinations in both cuisines that make Italian wines naturally more compatible.

Outside of Italy, the list doles out the most real estate to France and the U.S. There are gems to be found from both countries, but there is also less consistency of vision and intrigue than you'll find in Italy. So if you're looking for wines that won't rock the boat, you will have no trouble here, but if you're seeking a bit more edge, best test out Massoni's theory.

Bang for Your Buck
Domaine Taille Aux Loups, 'Les Caburoches' Vouvray '11 $54
Jacky Blot is reliably one of the great winemakers working with the chenin blanc grape. The Les Caburoches Sec (dry) is sourced from 30-year-old vines and is aged on the lees in neutral oak. This has all of the intensity of chenin from Vouvray, with plenty of crack and lift.

Abbazia di Novacella, Kerner '11 $46
The love child of schiava and riesling, kerner is the unique language of this true old-timer (one of the dustiest wineries at c. 1142). Highly aromatic and full-bodied with great acidity.

Domenico Clerico, 'Trevigne' Barbera d'Alba '08 $49
Domenico is one of Piedmont’s most beloved characters and his wines are directly reflective of his trademark exuberance. As is typical of the house style, this is dark, intense, outgoing barbera.

La Kiuva, 'Arnad Montjovet' Nebbiolo, Pinot Noir '10 $45
Hailing from the DOC of Arnad-Montjovet in Italy’s northernmost region of the Valle d’Aosta, this is a blend of picatendro (the local clone of nebbiolo) and pinot noir. Bright red fruit and high acid.

Qupe, 'Sawyer Lindquist Vineyard' Syrah '09 $62
Qupe is one of the most consistent, value-driven labels out of California's Central Coast. Winemaker Bob Lindquist has always found a way to straddle the New and Old Worlds with grace, producing wines with plenty of fruit and acidity back it up. This comes from a fairly new, biodynamic site in the Edna Valley. Forward, but not without sacrificing the floral, peppery quality of the grape.

Off The Beaten Path
Chateau de Roquefort, 'Petit Sale de Villeneuve' Clairette '11 $38
Though there is a decent amount of Clairette planted in the Southern Rhône, much of it is used in the production of Vermouth. It's not a grape known for its complexity, but when picked early enough can produce an easy-drinking, food-friendly wine.

Crowd Pleaser
Fondo Antico, 'I Versi Bianco' Grecanico, Inzolia, Grillo '10 $34
A blend of three of Sicily's most planted white grapes. Grillo gives the girth, grecanico the acidity, and inzolia the spice. Plenty of fruit and freshness.

Under $40
Castello di Luzzano, Bonarda dell'Oltrepo Pavese (lightly sparkling red) '10 $35
Think of this as a lighter, more floral version of Lambrusco. This comes from Lombardia's Oltrepo Pavese region and is vinified from the bonarda grape, which is known for producing wines with a plush red fruit, and a floral, herbal edge. This is one of the best bets with this cuisine, in this price range.

Break The Bank
Tenuta di Trinoro, 'Le Cupole' '06 $71
Tenuta di Trinoro is one of the younger stars of the Super Tuscan clan. Located in an odd corner of the region near the border of Lazio and Umbria, the estate works almost exclusively with Bordeaux varieties. This is the estate's second label and is a blend of mostly cabernet franc with cabernet sauvignon, merlot, and uva di troia holding up the balance. It's a bold wine at a solid price with a few years in bottle. A good buy for those looking for something with a bit more punch.

Famiglia Anselma, Barolo '03 $100
Though 2003 was a warm vintage in Piedmont that produced a lot of overblown wines, Maurzio Anselma managed the vintage with poise. The result is a Barolo that will drink more open than some of the more classic vintages that still has great balance and freshness. Best buy in this price point.

WTF?
Villa Sparina, 'Monterotondo' Gavi di Gavi '05 $122
This is made in an ambitious New World style and will be definitely be up the alley of those who prefer some wood on their whites. But regardless of whether you like the style, it's not worth the price. Go with the Miner Chardonnay for half the coin.
[Photo: Krieger]