President Barack Obama to Attend Dinner at The Nomad

Share All sharing options for: President Barack Obama to Attend Dinner at The Nomad 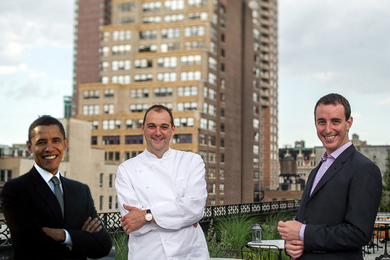 Nomadness is about to reach a whole new level. Later today, the President of the United States will head to Will Guidara and Daniel Humm's blockbuster restaurant for a $40,000 a-head fundraiser.

President Obama will speak to donors at 8 p.m. After that, he'll eat a whole chicken for two in the Cupola, by himself, with a bottle of refreshing tomato soda on the side. In the last year, the POTUS dined at ABC Kitchen, Daniel, and Gotham Bar & Grill. He also ate a meal at Sarah Jessica Parker's House that was cooked by Michael White. Maybe Humm will treat Obama to some of the new dishes and magic tricks that he's working on over at EMP.
· President Obama Heads to New York [ObFo]
· All Coverage of The Nomad [~ENY~]
· All Coverage of Barack Obama [~ENY~]