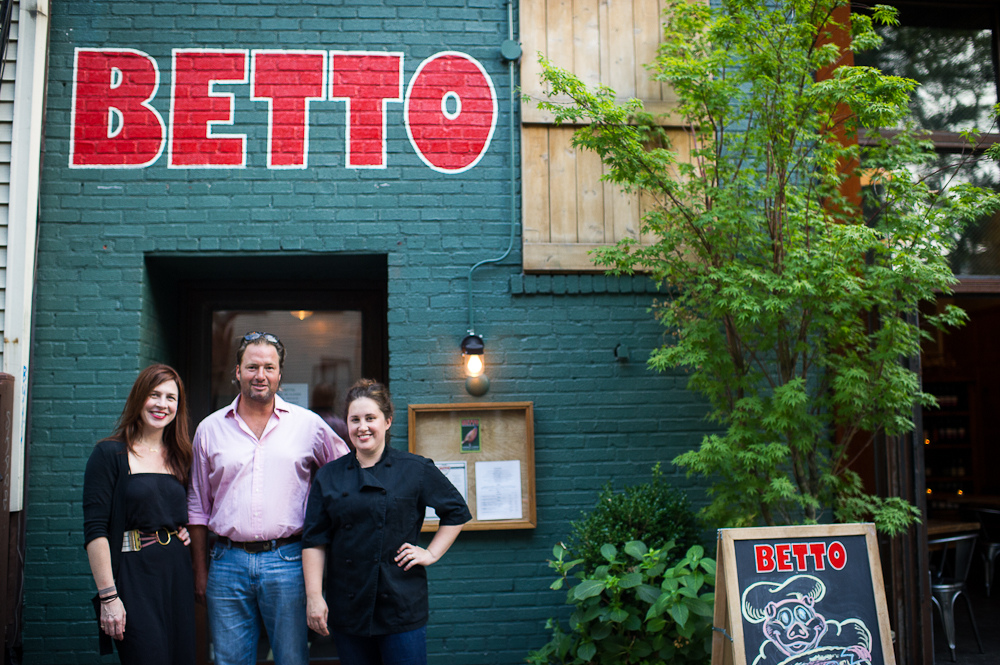 [Liz Carr, Jason Denton, and Shaunna Sargent; Krieger, 07/11/12]
Betto is the affordable, relaxed Williamsburg Italian restaurant from restaurateurs Jason Denton and Liz Carr, and chef Shaunna Sargent. Although most of the big critics skipped Betto, the restaurant has developed plenty of die-hard fans over the last year. Eater recently chatted with the team about the opening of Betto, the changes at the restaurant, and the road ahead.

Jason, you've opened several successful Manhattan restaurants. Why did you decide to move to Brooklyn? Jason Denton, restaurateur: Over the last four or five years, we found ourselves getting rooted in the West Village. After a while, we said, "Why don’t we do a little place in Brooklyn?" After coming out here a few times, I just kind of gravitated to this area. It has a great energy, and it reminds me of what the Lower East Side was like when we first opened down there — really young and vibrant.

What was the original concept for Betto? Jason: We really wanted to find a venue that let us do a combination of the different things that we have done in the past. Here, we do the small plates and the snacks, and when we do the large parties, we have the ability to serve large format animals where we break it down and make it fun for everyone. In the same sense, it’s a place where someone can come four or five nights a week and have a glass of wine with a little pizza, or a glass of wine with a sandwich.

We hope that over time, when someone is hosting guests or family from out of town, they'll say, "I want to take you to my haunt, the place where I bring people." Our goal is for people to feel comfortable to come every day and also be able to show it off as their place. We’ve gone through some different incarnations, and we know we’re going to be here for a long time. So right now, it's about finding the best thing for the neighborhood.

Were there any delays? Liz Carr, managing partner: I think there are delays with every restaurant. You have the projected opening date, then one thing or another happens. But you need to make sure the food tastes great when you open, and you definitely need to have the service nailed down. Jason: The opening was set back a little bit due to the liquor license and other things. Could we have opened up a month and a half earlier? Possibly. But then it would have been rushed. We thought it was in our best interests to open when we were ready. It’s important to be patient and buy yourself some time to do it right.

Shaunna, did you bring over any staff from Corsino? Shaunna Sargent, chef: Yes, I brought over a few cooks from Corsino, and a friend of mine that works at Del Posto recommended my sous chef. I came in, and I thought it was an amazing team. I couldn’t have a better group of people to work with.

How did the opening go? Did people check it out at first? Jason: Honestly, it was very challenging in the beginning. Manhattan is very vertical and densely populated — buildings on top of buildings. But in Brooklyn, it seems more horizontal and spread out. People tend to gravitate towards their neighborhoods and it’s not quite as easy to get here from say, Carroll Gardens. But in Manhattan, it’s pretty easy getting from the East Village to West Village.

It’s been a great learning experience for us. We have a long lease and we plan on being here for a long time. It’s one of those things where we said, "Listen, we are going to be really patient. We are going to try to do our best to deliver high quality ingredients at a reasonable price, and make it fun."

So, it sounds like you guys had a slow opening then? Liz: Yeah...I have to say, though, we have wonderful regular guests that live in the neighborhood. They come in sometimes two or three times a week for dinner and brunch, and then they spend their birthdays here, or they bring their in-laws, or they introduce their parents to each other. It's been nice to recognize them and have them feel comfortable in the room, and taste around the menu. I think you can really eat here five days a week and have a completely different food experience every time.

It sounds like the location is a challenge. Would you say that's true? Liz: A little bit, but I don't know. Bedford Avenue is saturated with very different things. A lot of them are food, but nothing is like us, and it’s kind of nice to be out of the fray. When people come here, they know that they can relax in a medium-size room that seems much larger because the ceiling is so high, and they feel like it’s just really comfortable. I feel like it’s an oasis off of Bedford. Jason: We’ve been here for a year, but up until two months ago, it was a construction site with scaffolding in front of us. So, unless you knew what it was, you wouldn’t identify it as a restaurant because there were bags of concrete and scaffolding everywhere. That was a little bit of a challenge, but nothing that we won’t overcome.

Did you feel like the critics missed this restaurant? Jason: Would we have loved more press? Absolutely. But those things take time. Maybe we weren’t on the radar then, but now we will be. It’s a learning process for every restaurant that we open. Then we figure out new things and get a different understanding of what’s going on. Obviously the critics have a job to do and they have a lot of different restaurants to see. Shaunna: I'd almost prefer to be successful without them. Like, Lupa didn't get reviewed for 10 years, and it's one of the best restaurants in the city, I think.

Has the menu changed a lot over the last year? Shaunna: The menu has changed a little bit. The whole animal thing was a great idea, but we couldn’t really sell a whole animal in a whole night. We started getting into smaller cuts. Jason: And we just launched our summer menu.

So what is this summer menu? Can you tell me about that? Shaunna: We’re going to try and keep the same sort of thing going. We do whole animals on the weekends. Jason: For large events and larger parties. Shaunna: Because we weren't utilizing the great big ovens that we were cooking the whole animals in, we've started doing a bread program. Jason: We’re going to work on the bread stuff. But really, it’s more for like pizzas and French-style flatbreads. It’s pretty much in the style of traditional Neapolitan pizza dough. It's proofed in our refrigerators so you get those nice big bubbles Shaunna: But it's proofed for a little while longer than most pizza dough. That’s where its flavor comes from, because it starts to ferment a little bit. Jason: We’re keeping the ingredients really simple and just adding something a little light and easy for people to share.