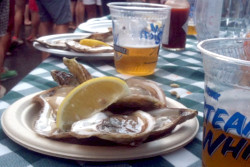 1) Oysterfest at Brooklyn Oenology Tasting Room
When: Today, 2 p.m. to 6 p.m.
Where: Brooklyn Oenology, 209 Wythe Ave, Brooklyn
What: Williamsburg winery Brooklyn Oenology is hosting an oyster eating extravaganza. They're offering all-you-can-eat $1 locally sourced Blue Point oysters paired with a selection of whites, sparklings, and roses. They're also celebrating the release of their new blend, the 2011 Shindig White, with $1 discounts on glasses and ten percent off the purchase of any bottle. 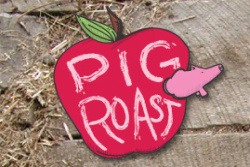 2) Pig Roast at 3rd Ward
When: Today, 4 p.m. to 12 a.m.
Where: 3rd Ward, 195 Morgan Ave, Brooklyn
What: 3rd Ward is hosting it's fifth annual summer pig roast. Sustainable farmer Bev Eggleston roasted a pig last night and will be serving up the tender meat today in the form of pulled pork sandwiches and pork platters. Sides, including cole slaw, corn on the cob, and collard greens, will also be available. There will also be Monster Haus popsicles, live music, and an ice cream tasting. Admission is free, but RSVP here to get the latest info. 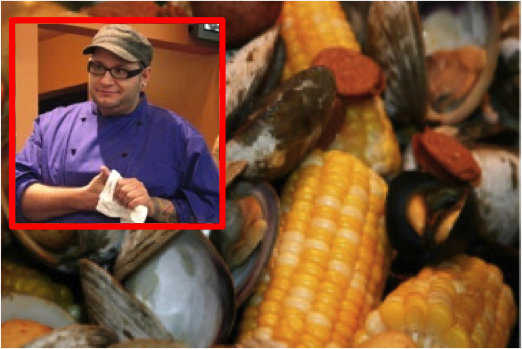 3) Clam Bake on City Island
When: Sunday, 12 p.m. to 2 p.m.
Where: Bay Street Beach, City Island
What: Michael Proietti, a contestant on The Next Food Network Star, will host a clambake at Bay Street Beach, a private beach on City Island. The seafood feast will involve the obligatory clams as well as some crab, mussels, oysters, and corn on the cob. The event is BYOB, so stock up before you go. Proietti will bring the ice tea and water. Tickets are $75. 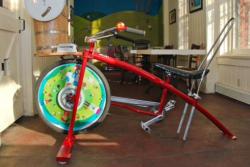 4) Ice Cream Day at Smorgasburg
When: Today, 11 a.m. to 6 p.m.
Where: Smorgasburg, Williamsburg waterfront
What: Brooklyn Kitchen is celebrating National Ice Cream Day with a day-long ice cream festival at Smorgasburg. As part of their monthly "Kitchen Island" series, more than a dozen local frozen dessert vendors will showoff their goods with samples to taste and items to buy. Check out the complete lineup here. There will also be demos and an ice cream-churning bike to play on. 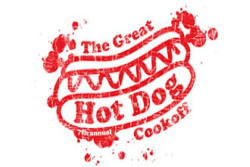 5) The Great Hot Dog Cookoff
When: Today, gates open at 1:30 p.m.
Where: 630 Flushing Ave, Brooklyn
What: Chow down on creations from 24 hot dog enthusiasts and vote for your favorite take on the classic. Expect eccentric toppings, bun pairings, and cooking styles, beer from KelSo, and tunes from DJ Rabbi Darkside. And this year, for the first time ever, professional chefs will have their own hot dog throw-down. The lineup includes chefs from Gramercy Tavern, Mile End, Marlow & Daughters, The Meat Hook, and the vegan Maimonide Of Brooklyn. Tickets are available for two different "Weenie Experiences" ($45 and $75). All proceeds go to benefit the Food Bank For New York City to help in their fight against hunger.

Also of Note: Smorgasburg and the Hester Street Fair are both on for today. The New Amsterdam Market is open tomorrow from 11 a.m. to 4 p.m. and is hosting a special meat cutting demo and discussion with Adam Tiberio of Tiberio Custom Meats. Looking to try a new restaurant this weekend? Try the newly minted lunch menu at Perla or Prandial, the new French-influenced American restaurant in Chelsea. If you're looking for a place to grab a drink this weekend, check out Eater's guide to 12 of New York's best cocktail bars. Or, if you're hoping to impress your friends with a classic New York dish, consult Eater's guide to NYC's 20 Most Iconic Dishes.