Share All sharing options for: Reynards Raises the Bar For Williamsburg's Wine Scene 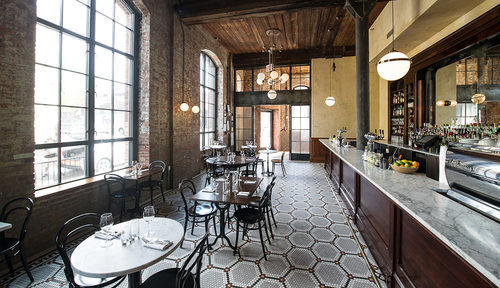 Andrew Tarlow is one of Williamsburg's visionaries and a pioneer of the Brooklyn restaurant aesthetic before restaurants full of old things became the new thing.

In late 1998 he opened Diner in a 1920s metal dining car on Broadway, the street that would become the ever-rising great wall between Williamsburg's haseeds and hipsters. In a neighborhood that's since become ground zero for tank top-clad men who make everything from $20 chutney to chocolate, it undoubtedly seems so, well, Williamsburg. But back then it was an oddity planted in the abiding shadow of the Williamsburg Bridge in a neighborhood that was still years away from becoming headquarters for the artisanal food movement.

In 2004 Tarlow planted his second restaurant, Marlow & Sons, a dimly-lit tavern just down the block from Diner, filled it with pretty servers, muscadet, simple food and kept a steady stream of Indie Americana bands on loop. It was—and still is—the sort of place that plays perfect host to Williamsburg's prairie-chic set.

Reynards is Tarlow's third proper restaurant in Williamsburg and if you've walked down Bedford Avenue and wondered where all of the people who wash their hair are—they're here.

The sort of gruff, rustic counter-culturalism that Tarlow seemed to channel at both his previous restaurants has been swapped for more gloss, and an air of edgy elegance. Perhaps he's grown up, or maybe he envisions a Williamsburg that's ready to push beyond adolescence.

More than the food, the wine list manages to be the perfect embodiment of this vision. It's the handwork of Lee Campbell, formerly of Louis/Dressner—one of the city's best importers. For Campbell this is a homecoming of sorts. Before working for Dressner, she was the wine director at the now-shuttered Provence and a floor sommelier at Nick and Toni's in East Hampton during the summer. At Dressner she honed her love for small producers working traditionally and with minimal intervention—the same producers that Tarlow was slinging at both his restaurants when barely anyone was paying attention.

Many of these natural wines have become the symbols of wine's counter culture—wines that stick it to the establishment and seek to defy the commercialism that has crept into the wine industry over the last 20 years. They've found a home in Brooklyn.

Down south on Wythe Ave, at Isa, Byron Bates put together a whole list of unsulfured wines, and came up with a list that seemed to parallel the anti-establishment attitude that, however threatened by gentrification, still remains the heartbeat of Williamsburg.

Reynards suggests that this counter-culturalism, in both wine and restaurants, can also be elegant. Like the clientele, the wine list seems to attract the natural wines that wash their hair, so to speak. And while you'll find several challenging wines here, for the most part this is a list that elevates, gracefully, these wines into a more polished setting, in the same way that Pascaline Lepeltier's wine list at Rouge Tomate has.

The list here is almost exclusively French, with a strong focus on the wines of the Jura and Beaujolais, with a whole slew of off-the-beaten path wines from the Loire and Southern France.

It's also home to what is likely the city's more eclectic list of sparkling wines. A whole page is dedicated to everything from petillant naturel (sparkling wines bottled before dryness with no yeast added that finish in bottle, trapping CO2 and creating bubbles) wines from the Loire to a méthode champenoise wine from the nearly extinct gringet grape, out of Savoie. Most of them hover right around $50 and under, with a short list of Champagne that creeps into the high $100s. It's a great place to play around.

Campbell's tastes lean toward the esoteric and without guidance the list will be difficult to navigate for the average diner. But it's affordable and most of the wines are priced to encourage adventure. It's easily one of the more ambitious lists in the neighborhood and, if Tarlow's still got the mojo, a peak into the future.

Bang For Your Buck
FRANCK PEILLOT Montagnieu, Roussette du Bugey {Altesse} 2011 $56
Montagnieu is a small village in the region of Bugey, which is wedged between the Jura and Savoie in France's southeast corner. Here most of the wine production is white or sparkling coming from gamay, rousette (which is also called altesse and is the variety that makes up this wine), jacquere, and chardonnay. Super aromatic, crisp and herbaceous with dense fruit and mineral on the palate and brisk acidity.

GUY BOSSARD Expression de Gneiss, Muscadet-de-Sèvre-et-Maine {Melon} 2009 $42
One of the finest producers of muscadet in the Loire. This is a fine example of the energy behind the melon de bourgogne grape when taken seriously. All of the charm and freshness you'd expect from Muscadet, with a bit more stuffing.

DOMAINE DE L A CADETTE Vézelay {Melon de Bourgogne} 2010 $50
Another, very rare, example of melon from outside the Loire. Here the grape is grown in the limestone soils of Vezelay, near Chablis. Here the transparency and neutrality of melon makes for a terrific example of how different the grape tastes from these soils. Chalky, salty and slightly less acidic than some of the examples of the grape out of the Loire.

CLOS ROCHE BLANCHE Touraine Rosé {Pineau d’Aunis} 2011 $44
Consistently one of the best producers of sauvignon blanc and pineau d'aunis in the Loire. Here a rose of pineau d'aunis, an ancient red grape native to the Loire that's full of round red fruit, herbs and ashy minerality.

RÉGIS BOUVIER En Montre Cul, Bourgogne {Pinot Noir} 2010 $55
A lieu-dit (very generally, a vineyard of note) from an unusually steep for a Bourgogne bottling. Bright, lean, classic pinot noir. A lot of wine for the price.

DOMAINE GUILLOT-BROUX Mâcon-Cruzille {Gamay} 2010 $45
Macon-Cruzilles is a tiny village located in the northern Macon, that is a rare island of gamay in a sea of pinot and chardonnay. This is sourced from an organically-farmed clay and limestone plot and is all lean red fruit, pepper, and herbs. With drink well with a slight chill.

MATASSA L’Estanya, Côtes Catalanes {Carignan, Syrah, Grenache} 2008 $46
This is a bottling of primarily carignan sourced from 110 year old vines planted in marl and slate in the Cotes Catalanes subregion of Roussillon. Eveything is farmed organically. Dense, dark wine that speaks of its latitiude but remains high in acid and lithe despite its girth.

Crowd Pleaser
MICHEL LAFARGE Passetoutgrain {Pinot Noir, Gamay} 2010 $48
Lafarge produces some of the most stunning classic Burgundy out of Volnay. Passetoutgrains is a designation that is used for pinot noir blended with gamay within the Bourgogne appellation. This is a solid go-to, lean and elegant, with enough fruit to satisfy the masses.

Under $40
MICHEL BREGEON Muscadet-de-Sèvre-et-Maine {Melon de Bourgogne} 2010 $38
Bregeon is another one of the great producers of Muscadet. With $40 to speand there is no way to go wrong here. Classic, salty.

Off The Beaten Path
DOMAINE BELLUARD Ayse, Haute-Savoie {Gringet} Brut NV $54
Gringet is a nearly-extinct grape native to the Savoie region of France. Here it comes in the form of a méthode champenoise wine that spend 2 years on its lees prior to being disgorged.

Break The Bank
CHAMPAGNE ULYSSE COLLIN Blanc de Blanc, Côte de Sézanne {Chardonnay} Extra Brut NV $155
The most recent Blanc de Blancs release from grower-producer Olivier Collin of Ulysse Collin is the best in years. Collin is a former student of Anseleme Selosse, one of Champagne's greatest producers. Still quite young, but a wine that will still show well on opening and has a bit more stuffing than some previous releases.

DOMAINE DE L A BONGRAN Quintaine, Viré-Clessé {Chardonnay} 2005 $80
Not your average sluggable Macon. The winemaker at Bongran, Jean Thevenet, picks late, and the wines are rich (sometimes with a touch of botrytis) and are built to age. This is a wine that's warm but balanced and is made for pate and richer foods.

OVERNOY-HOUILLON Arbois Pupillin {Chardonnay} 2010 $85
Pierre Overnoy is one of the great pioneers of natural winemaking and an icon of Jura wine. The estate, now under the direction of Emmanuel Houillon, a former student of Overnoy’s, makes some of the most pure, genuine wines the region has to offer. This is one of the best chardonnays out of the region and one worthy of some time in the decanter.

WTF?
Unless you really hate French wine, there really isn't anything to be angry about here. [Krieger]