Dieterle and Stulman Get Approval for New Projects

Share All sharing options for: Dieterle and Stulman Get Approval for New Projects

Last night, three big-name restaurateurs appeared before the Community Board 2's SLA Licensing Committee. Here's how it all went down: 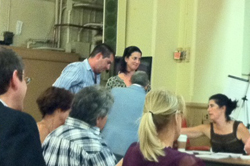 1) The Miracle at 99 Bank Street: Harold Dieterle and Alicia Nosenzo got the initial approval from the Community Board 2 for their new project, The Marrow, in the former Paris Commune space at 99 Bank Street. This is the same space that Stephen Starr was eyeing for a new restaurant back in March, but he scrapped his plans after encountering serious resistance from the neighbors.

Dieterle and Nosenzo explained that their new Italian and German-influenced restaurant would not alter the footprint of the space, and they agreed to close up shop at a reasonable hour each night. About 15 people showed up to voice their support last night, and there were no objections whatsoever. The Marrow was originally slated to open in the Hotel 718 in Downtown Brooklyn, but Dieterle and Nosenzo starting looking for a new home for the restaurant after the hotel was sold to a new management company.

But the miracle at 99 Bank Street wasn't the only surprise of the evening. West Village restaurateur Gabe Stulman also appeared before the board to rally support for a brand new project in the neighborhood. 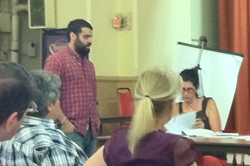 2) Stulman's Japanese Foray: Gabe Stulman, of the Little Wisco mini-empire, appeared before the board to rally support for a new restaurant at 233 W. 4th St. (aka 183 W. 10th St.), which is the space that currently houses I Tre Merli. "What we want to put here is our very inauthentic take on a Japanese Izakaya," Stulman explained. The restaurant will offer a lot of different raw fish and sashimi preparations, and the space will have 32 seats. Stulman has a flawless reputation as an operator, and several neighbors spoke in favor of this new project, including one West Village resident who initially opposed the opening of Fedora almost two years ago. This was an easy decision for the members of the board: thumbs up. The restaurant is currently doing business under the name "St. Helene LLC." No word yet on when I Tre Merli will close, or when Stulman's newest will open, but a late fall debut sounds about right. 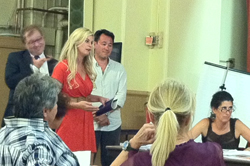 3) A Narrow Victory for Jen Carroll: Although she ultimately won initial approval, Top Chef alum Jennifer Carroll did not have an easy time before the Community Board 2 last night. Carroll and her lawyer argued for a late closing time (2 a.m.) for their new restaurant at 33 Greenwich Ave, seven days a week. The project is being pitched as a white tablecloth restaurant with a seafood focus, and Carroll explained that she wanted to keep late hours so that chefs and industry folk could have a place to go to after work. Several neighbors spoke out against the late hours, and after a long explanation about the dynamics of the neighborhood, the board was able to get Carroll and her lawyer to agree to a midnight closing time Sunday through Thursday, and a 1 a.m. closing time on Friday and Saturday.
· All Coverage of First Word [~ENY~]