Rosemary's Takes a Page From Cotogna With $40 Bottles

Share All sharing options for: Rosemary's Takes a Page From Cotogna With $40 Bottles 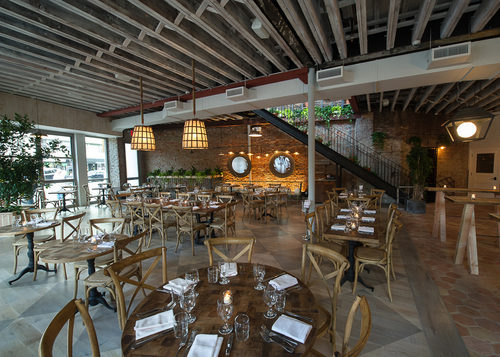 Rosemary's, a new rustic Italian restaurant from the folks at Bobo, opened its doors last month to a steady stream of grown-up sorority types and fashionable bankers. It looks like a Crate & Barrel catalog full of unfinished furniture—which, it turns out, is actually a good thing.

It's one of the more beautiful restaurants in the West Village in a large corner space on Greenwich and West 10th that Keith McNally was eyeing for Pluino's 2.0. Once inside it's easy to see why. But McNally eventually backed out and the Bobo folks installed their roof-to-table Italian restaurant with the help of chef Wade Moses, formerly of Babbo and Lupa, and beverage director Dan Christensen, a former sommelier at Manzo and a recent NYC import from Colorado.

One of the big draws here is the rooftop garden, which finds a way to creep down into the restaurant and deposit potted plants and herbs onto most of the available shelving and table space. The food is simple and the wine list even simpler: everything on it is $40. It's essentially the same concept that David Lynch installed at San Francisco's Cotogna.

Christensen, who joined Rosemary's after the skeleton of the list was already established, is quick to admit that the list is indeed a riff on Lynch's (the restaurant has investors based in San Francisco).

Like Cotogna's list, all of the selections are Italian, but here Christensen seems to feel more of an obligation to the mainstream, offering varieties like chardonnay, pinot noir, and cabernet for those just looking for something familiar. But including Cusumano pinot noir from Sicily isn't doing the region any favors and simply feels dated amidst the region's more recent renaissance. These concessions feel particularly unnecessary on top of the short tastings notes that Christensen has already attached to each wine to help the customer along.

But thankfully the list's abdications are fewer than its small triumphs, which come in the form of excellent table wines—like Vestini's 'Kajanero' made from Campania's pallagrello nero grape and Poggionotte's juicy and bright nero d'avola—that are reflective of their regional heritage.

While Christensen seems energized about the concept of the list, there aren't many wine directors who'd want to switch places with him. Putting together a full list of distinctive wines in this price point is difficult. But if there is any country that might enable such a thing, it's Italy. When the list puts its best foot forward, it's excellent proof of that.

Aside from the challenge of assembling a list in a single price point, what Christensen is most excited about is the list's ability, by taking price out of the equation, to inspire openness in the guest.

"Guests, particularly younger guests, seem to be really into it," he says. "It takes the fear of the upsell out of taking a chance on something I recommend and I think people are more willing to take my advice because of that."

In addition to the regular list there is a small reserve list, but there is very little depth and the selections are predictable. Save your cash and spend it elsewhere. For now, stay firmly within the $40 list and be adventurous. As is generally the case with Italy, the most obscure wines often offer the best value.

Bang For Your Buck
CAPITEL FOSCARINO, 2007, ANSELMI
Ansemli is a great producer of more modern-styled white wines from the Veneto region based on the garganega grape. This is a blend of primarily garganega with a small dose of chardonnay. The wines see some oak and do best with some time to integrate. This is a great deal if you're in it for a full-bodied white that's drinking well now.

ASPIRINIO, 2010, VESTINI CAMPAGNANO
On the flip side, if you want to go lean, high acid, and salty this bottling of the ancient asprinio variety is the one. Vestini is one of the Campanian producers credited with helping to revive the region's indigenous grapes, and is always a solid go-to.

BARBERA MONFERRATO, 2009, ACCORNERO
Accornero comes out of Piemonte's Monferrato region, which is perhaps the least well known of the three classified barbera-producing zones (Alba and Asti being the other two). Accornero makes a variety of wines from the region's indigenous varieties and is a reliable source of elegant, floral barbera.

NEBBIOLO D’ALBA, 2010, RENATO RATTI
Accessible nebbiolo from a more modern producer, that still manages to be true to the variety. From this vintage expect juicy acidity and bright red fruit. Nice wine for dishes that have a higher fat content.

KAJANERO, 2010, VESTINI-CAMPAGNANO
Just about the most charming pallagrello nero (a grape not known for its youthful nicety) you’ll ever have the pleasure of stumbling upon. Bright and forward with earth at its edges.

Crowd Pleaser
WEISSBURGUNDER, 2010, ERSTE NEUE
Weissburgunder, aka pinot blanc, is a grape you'll find planted throughout Alto Adige with mixed results. The grape can sometimes yield whites that are a touch flabby, but Erste + Neue typically manages to coax a lot of freshness out of the grape. A solid bet for a mixed crowd that offers equal doses of fruit and acidity.

NERO D’AVOLA, 2009, POGGIONOTTE
This is sort of nero d'avola that explains why the grape can be a great crowd pleaser that still shows a sense of place/varietal identity. This is all violets and dark fruit (without ceding acid) from the owners of the Di Giovanna estate, which is also makes a handful of solid value wines. The farming is organic and this particular bottling is un-oaked.

Off The Beaten Path
MARZEMINO, 2009, COSTARIPA
This particular bottling of marzemino—a grape planted throughout northern Italy—is based out of Lombardia and comes courtesy of the winemaker for Bellavista, one of Italy's best sparkling wine houses. The grape has a parent relationship with both refosco and teroldego and is a sibling of lagrein, so expect dark fruit, with floral and herbal aromatics.

Break The Bank
The best bet here is to stay put on the $40 list.

WTF?
PINOT NERO, 2008, CUSUMANO $40
There are a few additions like this one that don't do Italy any justice. Pinot noir just doesn't taste very good from Sicily and this doesn't belong on a list dedicated to the best affordable wines the country has to offer.

CABERNET SAUVIGNON, 2009. FAUST $115
The list is exclusively Italian, save for a couple Champagne options and this, a curiously out-of-place addition to the riserva list. If the goal is to have something in this style there are plenty of Super Tuscans that will fit the bill and the list far better than this lonely bottle of Napa cabernet.
· All Editions of Decanted [~ENY~]
[Krieger]