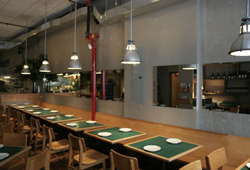 1) Noho: Bond Street hand-pulled noodle restaurant Hung Ry is dunzo. The restaurant received four Underground Gourmet stars when it opened a year and a half ago, but it went through a series of chef shuffles and filed for bankruptcy protection last fall. [NYT]

2) Nolita: Brunch favorite Nolita House closed last Friday after eight years in business. No word yet on what will take over the space, but it sounds like the owners hope to open another restaurant someday. [BB, Previously]

3) Park Slope: Park Slope Eatery closed last week. The Park Slope Patch notes that there's a marshal's note on the door, and that the gourmet cafe was evicted. The restaurant opened just two years ago. [PSP]

4) Chelsea: Jeremiah Moss reports that New China, a cheap take-out place on Ninth Avenue, is now closed. The word on the street is that the owners shut it down due to a rent increase from the landlord. [JVNY]

5) Midtown: Midtown Lunch brings word that Urban Lobster Shack closed recently. There's a sign on the door from the DOH notes that it was "operating without a permit." Elsewhere in the neighborhood, Menchanko Tei has been shuttered for a few weeks now. Back in May, a manager from the restaurant said that they were closing for renovations, but now the space is up for lease. [ML]

6) Cobble Hill: Karloff on Court Street is temporarily closed for renovations. A sign in the window reads: "Sorry for inconvenience. We will be closed for facelift, menu change, and kitchen upgrades to serve you better for times to come. Thank you and we will see you soon!" [Brownstoner]