The Salinas Team Reflects on One Year and Two Stars

Share All sharing options for: The Salinas Team Reflects on One Year and Two Stars 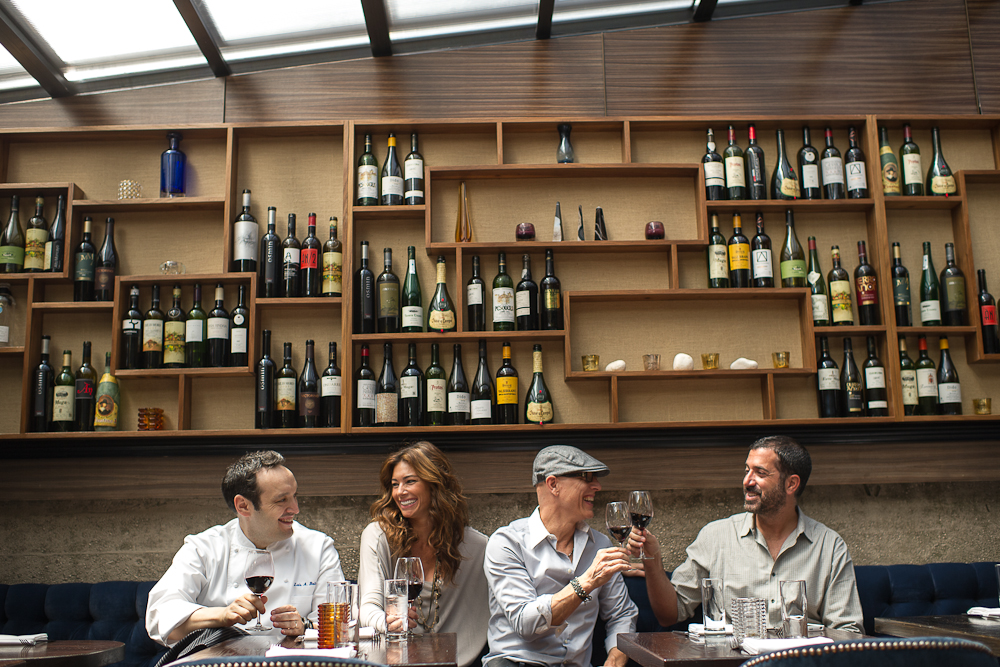 [Krieger, 05/31/12]
A group of friends' shared love affair with Spain informs the cuisine and the decor at Salinas in Chelsea. Deeply blue banquettes wrap around the center room and limestone from Spain neatly planks the walls. Touches like a fireplace in the back and a retractable roof that slides open make for a uniquely transportive space. A Spanish menu from chef Luis Bollo, a San Sebastián native, reaches beyond the parameters of only tapas, making the offerings of the restaurant like nothing else on Ninth Avenue––maybe even New York. Eater recently chatted with the team about how the restaurant began, how it has changed over the last year, and what it was like getting two stars.

When was the first time you thought about opening a Spanish-style restaurant? Mary Catherine “M.C.” Mikula, owner: The shared idea between Donald and me started about seven years ago, and about three years ago between the three of us. We each have our own special relationship with Spain, and obviously chef does too since he's from there. Because of our friendship, we all just came together. Nicolas Matar, owner: I've been going to Spain since I was a teenager. It's been a part of me since I was very young.

How do you all know each other? M.C.: Well, Donald and I are married, we just had our 13 year anniversary, and we have been friends with Nicolas for several years. Donald Mikula, owner: And with chef, it was just a perfect fit. M.C.: We knew it right away. Literally from the first bite. Because we had been tasting different foods from different chefs, it was immediately like, "This is it." I could close my eyes, and be on the beach having gazpacho and sangria." I literally could imagine myself there, and we hadn't tasted that in New York. Donald: It was amazing. We tried like eight or nine different chefs through the process. Before that, we were sitting, just looking at each other and thinking, "Man, this is going to be painful."

Chef Bollo, what was your background previous to Salinas? Luis Bollo, chef: I have a background in Spanish cuisine in New York. I opened a restaurant in Manhattan about 10 years ago called Meigas. I think that it was just ahead of its time. I don't think that the customer at that point was really prepared for what we were doing. It's funny because the reviewers were ready. Then after September 11, we were just too close to the World Trade Center, it was just too hard to maintain. After that, I had many opportunities to come back to N.Y., but I always felt that those offers weren't what I wanted. I knew that when I came back I would have to bring the full Spanish experience. That's why, when they told me what they wanted to do, I jumped, because it was what I wanted to do too.

Was there good reception in the neighborhood from the beginning? Donald: There really was. There was a void here before, something was missing. There were plenty of casual places with crowded bar stools, but we wanted this to be an extension of our living room, an authentic and pure representation of Spain. The neighborhood has embraced us because of that. Nicolas: We often have people come in and say that they don't feel like they are in New York.

It is sort of like being inside an incredible house. What was the build like? Donald: Well if you look at the Balearic Islands and the coastline, it's all limestone. Those colors were the inspiration––the blue of the Mediterranean, the limestone on the walls, the warm tones, the wood––then we had five tons of limestone dropped off in front of the building because they wouldn't bring it inside. We had piles in each room. It was a process. Nicolas: And it was shipped from Spain. Which cost A LOT of money. I mean, can you imagine how heavy that is? M.C: Each piece had to be put in one by one, and then there was cutting it, so it would fit like a puzzle. Then there would be a section that no matter what, it didn't look right, so we would take it down and do it again. It was a lot. But it was important.

How have you seen things change from the beginning? Nicolas: I think we have seen an evolution of the restaurant, the food just gets better and better, the service gets better. Practice makes perfect. In the last year we have had a chance to try to work on everything. Donald: After we receieved the two stars from the New York Times, that's when we really realized how the restaurant spoke to us. It made us look at the room again. Since then we put up acoustic panels, because when this room is packed for six hours, we realized that it was something we needed to do. It's all about the constant persuit of things that we have to do, and just this passion we all bring.

Anything that’s been really surprising or unexpected in the last year? Donald: That the restaurant is a destination spot––a lot of birthdays, a lot of celebrations, anniversaries––you see people that want to celebrate a special moment and this is a go-to place for them. That means a lot to us because it means they get it. M.C.: Yes, that was surprising. We didn't necessarily think about it or anticipate it, but when it started to happen it was a really nice surprise. That is the ultimate compliment if somebody wants to celebrate something that is really important to them with you. I'm getting goosebumps thinking about it, it’s so nice. It means a lot to us.

Were you surprised by the critical success and the two stars from the Times? Donald: We really did set goals for ourselves. That was one of things that chef achieved with the New York Times back at Meigas. So we knew the potential was there, we just had to build the team around him. When we got the two stars from the Times, I remember seeing chef outside. We literally almost broke each others ribs we hugged so hard. Nicolas: Thank God we got two stars, because for this chef, it was going to be two stars or bust.

Were you expecting the review? Chef Bollo: We were the first review by Eric Asimov, so we were kind of expecting someone else and we never realized he was the one. Nicolas: What added to the drama of the whole situation was that it was right at the time when Sam Sifton had stepped down and no one really knew who his successor was going to be. We had trained our staff for like six months on recognizing this certain person, we had pictures of Sifton posted everywhere, and then it wasn't him. M.C.: We were shocked. It was a great night when it came out though. It came out online, and while there were people in the dining room, you could hear them in the kitchen singing and clapping. Donald: It was like Spain just won the World Cup.

So what's next? Donald: The baby is growing up and starting to run a little bit, but as a compay and as a brand we have high standards. Someday we would like to design a boutique hotel and create a truly full experience. M.C.: With a Salinas of course. Nicolas: But for now, it has only been a year. We are focusing on perfecting this. Establishing this. A lot of people make the mistake of expanding too soon when they are not ready. When the time is right we'll consider it, but not after a year. M.C.: The business [points at Nicolas], and then the dreamers.

Does it feel like it's been a year? Donald: Yes and no. Some weeks are tougher than others, but we love it. We love seeing the young people come in. It's been like being out at sea with a bunch of people we didn't really know a year ago and now they are family. We had this couple that were in their 70s come in. They were this dashing, dapper couple and they were sitting in one of the banquettes. Towards the end of the night he gets up and sits next to her, and he kisses her a couple of times. And I am like, “Look at these two! They are just feeling it.” That's what it's about. That was a great moment. We were just looking at them and saying, “This is good stuff.”
· All Coverage of Salinas [~ENY~]