Filip Trcka Looks Back on Year One of Hospoda

Share All sharing options for: Filip Trcka Looks Back on Year One of Hospoda 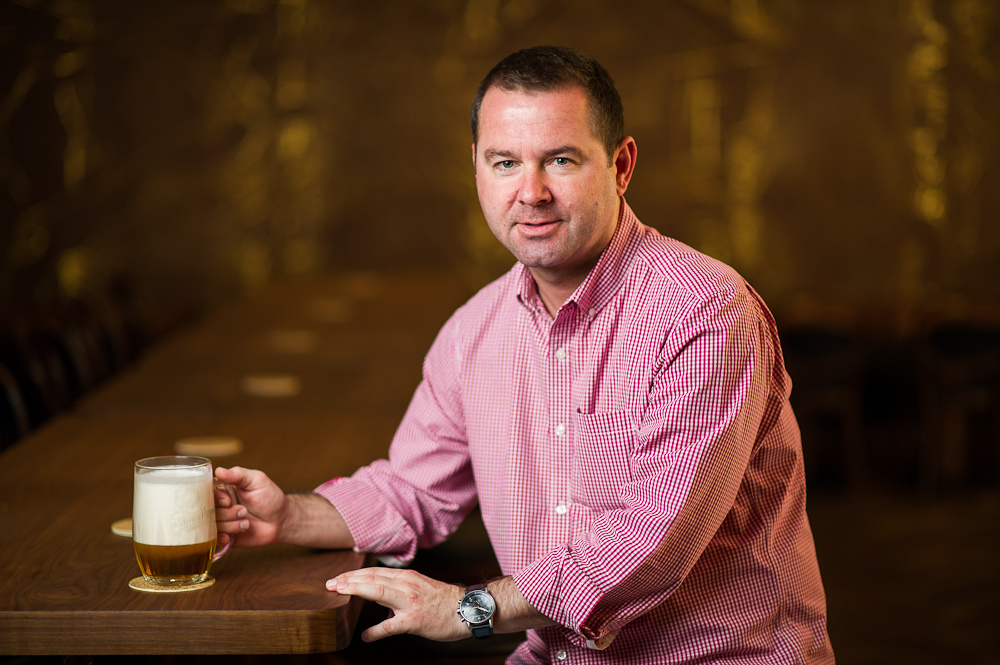 Hospoda was one of the most unusual openings of 2011. Located inside the Bohemian National Hall on the Upper East Side, the restaurant opened with a menu of refined Czech fare and a beverage menu that highlighted four different pours of Pilsner Urquell. The critics mostly liked the food and the concept, but the restaurant also made a lot of changes over the last year to appeal to the neighborhood. Eater recently chatted with general manager Filip Trcka about what has changed at Hospoda, and what has stayed the same.

Filip Trcka, general manager: I came to New York in January of last year to do all of the preparations and to find staff to supervise the final part of the building process. Everything is transferred from the Czech Republic. All chairs, all these wooden panels — everything is imported from overseas. I've been with the Ambiente restaurant group almost since the beginning, since 1997. I've been working for them in different places in Prague and now in New York.

How did the opening go? Were there any delays? Unfortunately, there were a couple of delays, which made us open the place a little later than we had planned. We actually opened at the beginning of the slower season on the Upper East Side. But overall, the opening was pretty fine and we got a lot of press in the beginning. So, it brought a lot of people and we were happy about that. The summer season is a little slow here. This is a residential area, and Upper East Siders usually spend weekends at their summer houses.

Did the customers connect with the food immediately? Since we operate 12 different restaurants in Prague, we know how to do the business in our town. But obviously, NYC is a little different. The expectations are different than in Europe and in Prague, especially. So, we came with some concepts that we slightly changed. We really listened to the feedback from customers and the press. Mr. Sifton gave us great feedback and we immediately changed a couple things after his review, and it actually worked. Right now we are focused on farm-to-table cuisine, and we are very strong with the beer and wine pairings — we have a great sommelier. It took us nearly a year to come up with the final adjustments, and to really get a better understanding of the neighborhood and people's expectations, but I think we are there.

So what changes do you have to make to connect with the neighborhood more? Not really pricing...The first idea was to kind of connect this restaurant with La Degustation in Prague, which was recently awarded a Michelin star. We brought beer and all this care and small plates. The small plates didn't really work in this neighborhood. People are expecting larger plates, so that's one of the things we actually changed. We have some signature dishes from Prague that we took with us, like a beef tongue, which is very popular. We transferred that to New York and actually, it's funny, this dish was voted one of the top 100 plates in the city by Time Out New York. But it didn't get a response in the neighborhood, so we actually took it off the menu and changed it for something that people would appreciate more.

So it sounds like you've kind of become more of a neighborhood restaurant over the last year. Do you think that's true? That's right. We stopped keeping all the rules of European cuisine. We are using the French techniques to prepare all the stocks, and this is what the makes the cuisine different from an American cuisine, let's say. But there were a lot of adjustments to really bring this to the neighborhood and let the people come in. Also, the neighborhood itself is not a bad neighborhood, but we are on a side street and there are still a lot of people that don't know we're here. Our goal is to actually become a destination place, to bring people here, because we have the best Pilsner Urquell in the city, and we are a little different than other places.

Has Hospoda caught on with the beer lovers? Oh yeah, we did some special events like a beer pairing with desserts, which was awesome. We have a good relationship with the Brooklyn Brewery, and we actually have two more lines on our tap. Beside our house beer, which is our Pilsner Urquell, we rotate the kegs so we always have two local craft brews.

What impresses the beer lovers? Is it the technology, or the way you guys pour it? Well, there are a couple of things. First of all, we have Pilsner Urquell on tap — that's our house beer. There are many places in New York that have Pilsner Urquell, but what we brought from the Czech Republic is the care. Every single detail is important to us. The refrigerated cellar under the glass floor is our walk-in where the beer is kept at 44 degrees Fahrenheit. The whole bar is refrigerated again at 44 degrees Fahrenheit, so the beer is at a stable temperature. Also, before we came to New York, before we even opened this restaurant, we actually made a deal with the importers that they will bring us beer that's as fresh as possible. So, we never have beer older than six weeks to two months, and they have it refrigerated all the way from Europe to the United States.

Then we are chilling the mugs. We are really paying attention to hand cleaning the glassware. And of course, we have the four different ways that we pour the beer. It depends how much CO2 is in the beer, so it doesn't just change just how the beer looks — how it is more or less foamy — but there's also a dramatic change in how the beer tastes. The liquid gives the beer a little bitterness and then the foam is what gives the beer sweetness. So, a different combination or a different level of beer and foam gives a little different taste.

Does it feel like it's been a year? To be honest with you, no it hasn't. Time runs so fast in NYC — it's crazy. But we really appreciate that the year went well. We built a name, we got a lot of positive reviews, we also are well rated on OpenTable and we hope to get a good rating in Zagat. So, it was a little work during this time, but a year in New York is probably faster than anywhere else in the world.