Corkbuzz Is Chatty and Open With a Side of Serious

Share All sharing options for: Corkbuzz Is Chatty and Open With a Side of Serious 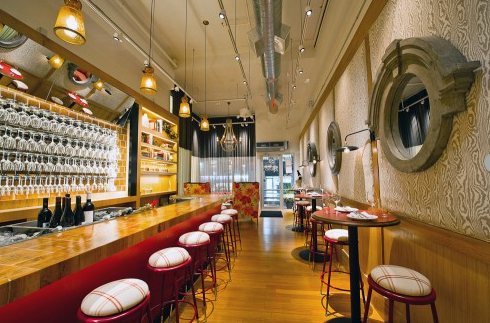 Is the sommelier's job to educate? For some, the art of wine service is about gracefully limiting oneself, providing only as much information as is necessary to present a wine. In other words: don't preach, because the guest probably doesn't belong to your church.

The other, more nouveau camp, sees the role of the sommelier as more of a storyteller or journey-maker, no doubt the product of a wine world that's wider and more esoteric than ever.

Master Sommelier Laura Maniec's Corkbuzz Wine Studio finds itself with a foot in both camps, combining chatty openness with good old-fashioned (and far too rare) wine service. That means proper glassware, serving temperatures, and a staff that is one of the most educated outside of fine dining.

Maniec is joined by two floor sommeliers—Stacey Gibson, formerly of Má Pêche, and Morgan Harris, down from The Tangled Vine—in addition to a bar and service team that Maniec, Gibson, and Harris have gone to great lengths to train.

The swift success of Corkbuzz, like the early success of Terroir, owes much to the education of its staff. Trust is everything when it comes to creating a loyal wine clientele. It's one thing if a server recommends a beet salad that's nothing like he or she described, but it's another when that server leads the diner down the wrong path toward a $100 bottle of wine. Corkbuzz is one of a select number of NYC bars and restaurants that allows even the most educated wine people to feel comfortable letting someone else drive.

Here that drive will take you through the sort of list you'd expect from a Master Sommelier. It's democratic in its geographic representation and shows a preference (though not exclusive) for classicism, all decorated with measured accents of esoterica. If there is allegiance to anything it's to Champagne, a passion that Maniec is willing to sacrifice profit to share. Every night of the week past 10 p.m. all of the Champagne on the list is 50 percent off.

Before 10 p.m. pricing can be a bit erratic, but does not gouge, and you are best to head straight to the "Motley Cru" section if you are looking for value under $75. This is where the esoterica hides and proves the assumption that the "unpronounceables" often offer the most value.

But the list and its contents—though expertly chosen—are not what make Corkbuzz unique. It's great service and knowledge that set it apart. And in a city where those two things are often at the mercy of hip, it's refreshing to know that there's a place where both are well protected.

Bang For Your Buck
Afros Loureiro '10 – Vinho Verde, Portugal | $42
One of the most exciting producers out of Portugal that's quickly establishing a new benchmark for Vinho Verde. 100 percent loureiro fermented with native yeast in stainless steel. Crisp, floral, mineral.

Clos Roche Blanche Sauvignon Blanc No. 2 '10 – Touraine, France | $58
With the explosion of quality wine from the Loire Valley in the US, it's easy to forget about some of those producers that have become mainstays. Clos Roche Blanche has long been producing a range of pure, wild sauvignon blanc out of Touraine. This cuvee, fermented in stainless steel, leans toward citrus and mineral.

Bründlmayer Heiligenstein Riesling ’10 – Kamptal, Austria | $73
The Heiligenstein vineyard is one of the most geologically unique sites in all of Austria and the wines that come from this site have, despite variations in winemaking technique, an almost universal expression of terroir. Bründlmayer's take is always among the most transparent and pure. Smoky, lean.

Giuseppe Mascarello Freisa '06 – Langhe, Italy | $58
Freisa is a card-carrying member of Piemonte's father-flung varieties. In a vaguely Oedipal twist, freisa was originally believed by many to be a distant cousin of nebbiolo, but it turns out it’s actually the grape’s mom. The grape actually has a tannic structure that could rival nebbiolo's, leading producers to make more serious, age-worthy wines from the variety. Giuseppe Mascarello's take on the grape is one of the regions best and here you'll have a chance to taste it with a few years under its belt.

La Clarine Farms Sumu Kaw Syrah '10 – Sierra Foothills, California | $65
The La Clarine Farms wines are produced in small quantities (only 210 cases of this wine) and are in high demand, thus they generally don't hang around on lists or shelves for long. This is Calfornia syrah (here with a dollop of mourvèdre) that takes inspiration from the northern Rhône and executes via minimal intervention in the cellar. Rustic, aromatic, and lively.

Crowd Pleaser
Do Ferreiro Albariño '10 – Rías Baixas, Spain | $55
Perhaps Spain's most well-known albariño producer, and still one of its best. This is the estate's cuvee sourced from younger vines (which here means 15-50 years old), but still shows plenty of depth, concentration, and intensity. Mineral, floral, and tropical.

Nittnaus Blaufränkisch '08 – Burgenland, Austria | $48
One of the most exciting producers of red wines out of Austria. All farming is conducted according to biodynamic principles and there's minimal intervention in the cellar. This is a pure introduction to just how much there is to love about blaufränkisch.

Off the Beaten Path
Clos Cibonne Tibouren '09 – Côtes de Provence, France | $58
This is a rose of100 percent tibouren, an ancient variety that's all but extinct in Provence. In an effort to return this estate to its former glory its proprietors ripped up all of the mourvèdre and hedged on tibouren. The grapes are aged in 100-year-old, 5,000 L barrels under a thin layer of flor, giving the wine a nutty, saline quality that recalls Lopez's staunchly-savory Rosado, pumped up with more outgoing, exuberant fruit.

Oikonomoy '00 – Sitia, Greece | $89
This is, in my mind, the most exciting new wine in the market from Greece. The wine hails from the island of Crete where and is made from special clone of liatiko grown nowhere else in Greece. The grape is grown in high elevations of the Ziros plateau, in eastern Crete and yields wines that are reminiscent of traditional nebbiolo. All of the techniques are traditional and the resulting wines are as pure as they are wild.

Under $40
Primitivo Quiles Cono Quatro '10 – Alicante, Spain | $34
Classic Alicante sourced from low-yielding monastrell (mourvèdre in French) vines and vinified in 80-year-old oak barrels and made in a slightly oxidative style, which makes for an interesting tangle of bright red fruit and warmer, spicy flavors.

Break The Bank
Lassaigne Les Vignes de Montgueux Extra Brut NV – Montgueux, Champagne | $100
This is a solid deal on one of the great values in grower Champagne. This wine hails from the Aube (pinot country) in the southern part of Champagne, a place now home to some of the region's most exciting producers. Because it's a lone chalk site planted to chardonnay in a region awash with pinot, Montgueux is known as the Montrachet of the Aube. This is forward, bold chardonnay that's as serious as it is easy to love.

Schloss Schönborn Rüdesheimer Berg Schlossberg Riesling Spätlese '97 | $99
An excellent estate in the Rheingau with a long history of quality wine production.. This is a terrific opportunity to understand how riesling ages for a very fair price.

Bernard Levet La Chavaroche '04 – Côte-Rôtie, France | $115
Levet's Côte-Rôties are some of the best values in the northern Rhône. Classic, savory, traditional syrah coming out of a region that has become increasingly polished. This is a lot of wine for just over $100.

WTF?
There are a few selections here and there with pricing on the high side, mostly on wines below $100. It's not so high that it warrants caution, but don't expect to find the lowest prices in town.
[Photo]