Share All sharing options for: A Food Tour of the 1939 World's Fair

This summer marks the 73rd anniversary of the 1939 World's Fair, an event that would change the New York dining world forever. Here's a look back at all the wonderful things that the visitors to the fair ate and drank at this epic summer spectacle.

The World's Fair was organized by a team of retired NYC policemen as a way of lifting the country's spirits after the Great Depression. The effort was spearheaded by former Police Commissioner Grover Whalen, who served as the president of the New York World's Fair Corporation. After four years of planning, the fair opened on April 30, 1939 on a plot of land in Queens that was formerly used as an ash dump.

The introduction to the official World's Fair pamphlet ended with these encouraging lines: To its visitors the Fair will say: "Here are the materials, ideas, and forces at work in our world. These are the tools with which the World of Tomorrow must be made. They are all interesting and much effort has been expended to lay them before you in an interesting way. Familiarity with today is the best preparation for the future.The fair celebrated newness and international cooperation at every turn. In this spirit, the grounds were filled with exhibits that showcased developments in food science, and also restaurants where visitors could taste dishes from all around the world. Food Exhibits:

The Food Building featured an exhibit that covered the previous 150 years of food science and inovation in America. A Times reporter noted that the "exhibit makes use of surrealistic dioramas and giant geometric forms which look like something out of an H.G. Wells fantasy of the future." The centerpiece of the darkened exhibit hall was a 60-foot-wide egg-shaped display: There one sees a moving chain of winged lobsters, a great transatlantic aqueduct which spills roses into a desert, an avocado with five jewels glowing from its skin and a clock which races madly backward from inside an opened tin can. This mysterious sight is explained by a voice which says, "this is the kind of world your great-great grandmother would imagine we lived in if she were told of our countless achievement in food."

The Borden's Dairyland exhibit showcased the latest in cow-milking technology. The Continental Baking building, which was designed to look like a bag of Wonder Bread, featured demonstrations about how various Continental products were made. The Kraft Foods exhibit illustrated how its products were processed using machines that had human-like fingers. And the Beech Nut building featured displays that educated guests on how coffee was grown and produced — it also had an elaborate circus diorama with tiny acrobats, clowns, and animals. American Restaurants:
There were 40 sit-down restaurants scattered across the grounds, as well as 261 individual refreshment stands, most of which served burgers, franks, sodas, and dairy products for 10 cents or less.

The fair hosted four Brass Rail restaurants, each of which had tables and dining bars. The Schaefer Center was one of the largest restaurants at the fair — it served multi-course meals from $1.35 - $2.75, as well as American staples, a la carte. Its menu was similar to that of an upscale steakhouse, with items like grilled sirloin steak ($2.25), chopped tenderloin ($90), and roast beef ($1.75). Guests could enjoy regional specialties from all across America at Ballantine's Three Ring Inn. The fair also had a branch of Chicago's Toffenetti restaurant, which offered a number of roasted and grilled meat dishes. And the Turf Trylon Club was one of the most expensive and popular restaurants at the fair. For affordable eats, guests could visit the Mayflower Tested Quality Donuts pavilion, or a branch of the popular Childs chain of restaurants, which served 22 plate lunches. The massive Casino of Nations also served inexpensive dishes, and the servers took orders in any of 12 languages.

International Fare:
But to adventurous diners, the biggest culinary thrills of the fest were found at the sit-down restaurants in the international pavilions. All of them served unusual delicacies made with imported ingredients, and many of them also offered wine, beer, and spirits that were hard to find in America. Here's a breakdown of what was served in some of these restaurants. [Click on each photo to enlarge] 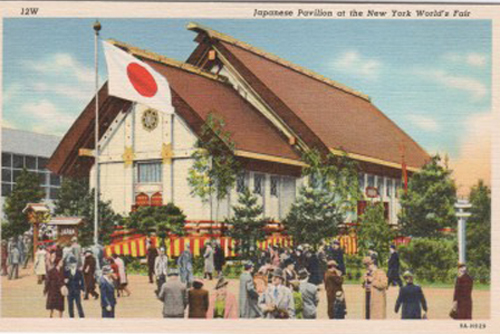 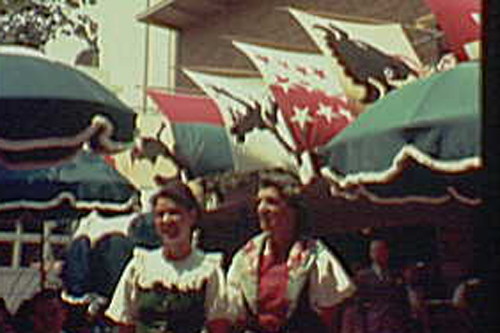 The Swiss pavilion had two very popular restaurants. One was an outdoor restaurant that served Swiss and American dishes served by waitresses in peasant garb. The other was The Chalet, which offered refined Swiss cuisine including the fried chicken, liver, and bacon dish known as brochettes Lucernoise. [Photo] 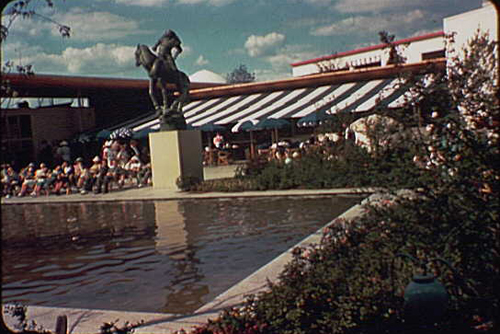 The Swedish pavilion had a restaurant called The Three Crowns, which included a revolving smorgasbord. [Photo] 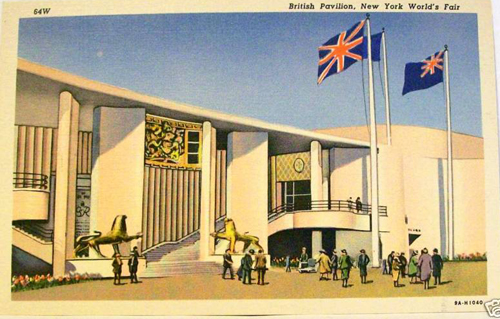 The British Buttery in the Great Britain pavilion provided guests with a wide range of dining options. On the low-end, fair patrons could order salads, sandwiches, and cheeses, while big spenders could feast on sirloin steaks, caviar canapes, and lamb chops. The restaurant served high tea in the afternoon and cocktails in the evening. [Photo] 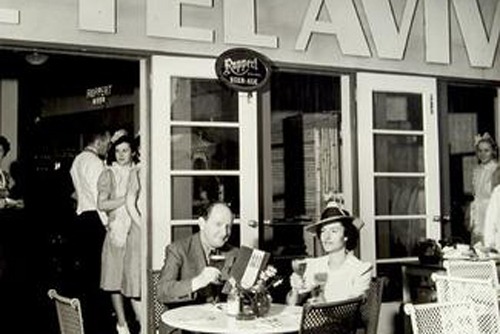 The Tel Aviv Cafe at the Jewish pavilion offered a few dishes that were common to New York delicatessens at the time, like pickled herring, as well as more traditional Middle Eastern fare, like zucchini with eggs and potatoes.[Photo] 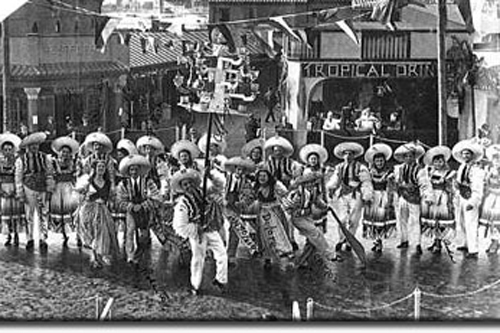 The Cuban Village featured a replica of Sloppy Joe's, which was a popular Havana tavern of the time. [Photo] 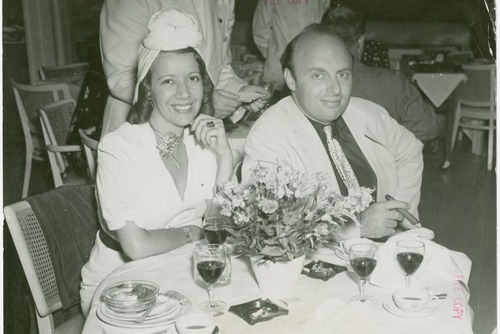 The Brazilian pavilion served coffee and dishes like chicken broth with rice and fish cooked in palm oil. [Photo] 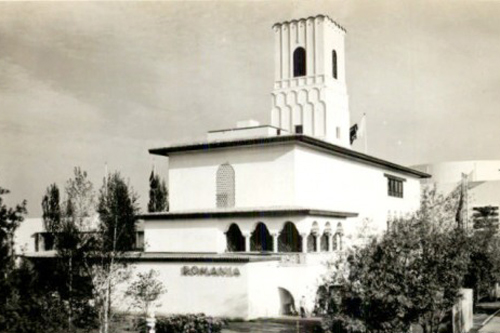 The Romanian pavilion had a fine-dining style restaurant called the Romanian House that offered an extensive wine list as well as caviar shipped by plane. [Photo] 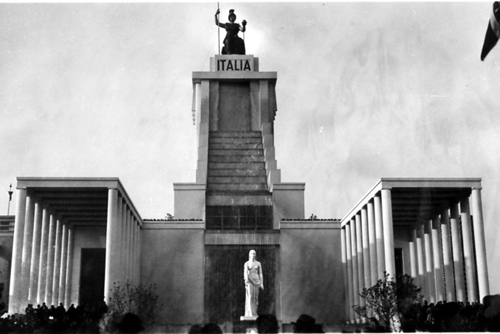 The Italian pavilion had a restaurant that paired famous dishes with wines from the regions where the recipes originated. A white truffle fonduta, for example, was served with Barolo. [Photo] 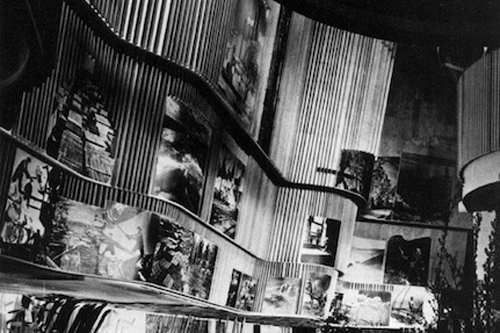 The Finnish Pavilion had a restaurant that served reindeer steak, salmon casserole, and rolled beef with vegetables. [Photo] 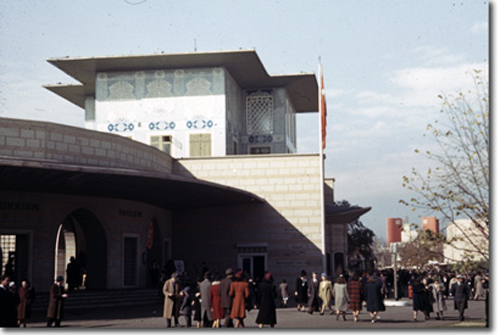 The Turkish pavilion featured a reproduction of a typical Turkish bar and restaurant. Guests could enjoy shish kebabs, stuffed mussels, and raki, an anise-flavored apéritif. The backside of the menu featured blurbs of famous Turkish folk tales. 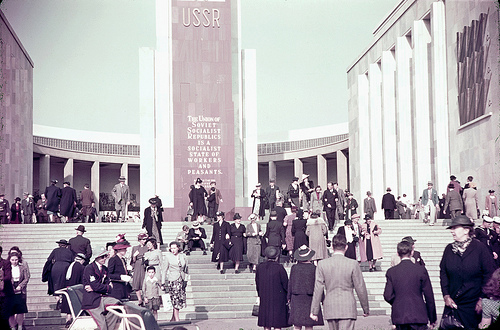 The Soviet pavilion featured a ritzy dining room with a menu that included shashlik, borscht, and several types of vodka. [Photo] 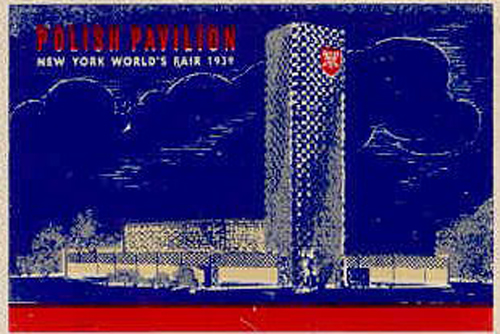 A handful of journalists wrote that the food was too expensive. After reading this, the commissioner of the World's Fair conducted a survey of the restaurants in the foreign zone, and estimated that full meals at these establishments cost about 43 cents on average, which was a standard price for a sit-down meal at a moderately priced Manhattan restaurant.

Menus from the World's Fair:

After the Fair:
The World's Fair introduced diners to many delicacies and styles of cuisine that were hard to find in New York, at the time. But the event also changed the New York dining scene in a different way: after the fair ended its two season run, some of the most popular restaurants made the jump from Queens to Manhattan, establishing brick and mortar restaurants that continued to offer the same food, served by the same people that traveled to New York for the fair. The restaurants from the Belgium, Swedish, and Swiss pavilions all opened outposts in Manhattan, as did Chicago's Toffenetti restaurant, which set up shop in a massive space in Times Square.

[Le Pavillon Photos: Electric Thoughts]
The staff of Le Restaurant Francais moved to a space on East 55th Street, and reopened the restaurant as Le Pavillon. With its doting proprietors, stylish dining room, dynamite food, and celebrity clientele, Le Pavillon was an instant hit.
· All Flashback Posts on Eater [~ENY~]