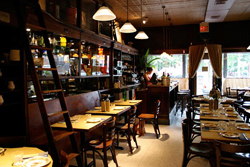 Locanda Vini e Olii opened more than a decade ago in an old apothecary in Clinton Hill decorated with vintage knickknacks. The rustic, reclaimed-chic of Locanda's interior has hardly changed, but the restaurant has. As of nearly two years ago, Locanda has new owners, lower prices, and a bigger wine list.

The restaurant's new owners are chef Michele Baldacci, operations guy Michael Schall, and sommelier Rocco Spagnardi. Spagnardi, who hails from a small fishing village on the Lazio coast called Sperlonga, originally came to Locanda in 2008 after seven years running restaurants in Rome, and several more working in hotels in Switzerland and England.

As part owner he has expanded the list slowly to include around 70 wines, including a riserva list, full of farther-flung regional Italian wines that will require a bit of guidance if you're arriving less than well-versed in Italy's oddities.

But conversations about wine abound here, mostly because of Spagnardi, whose Italian charm is the sort that should be bottled and sold off to lonely housewives. According to him, Locanda is a neighborhood restaurant, but one with a surprisingly adventurous clientele with gaggles returning for wines like Castello di Lispida's orange, amphora-aged friulano. But after eyeing a table full of sorority-turned-quasi-hipster girls in the corner giggling as he drops off a glass of Barolo Chinato with a wink and a smile, it's clear that it might be more than just the Lispida.

Whatever it is, it's working for Locanda. Though the list is small, it rotates frequently and Spagnardi estimates that he will feature at least 200 different wines on the list per year. On a recent visit I was happy to stumble across a couple of back-vintage verdicchios from San Lorenzo (1997 and 2002), wines that you could once find at places like Lupa and Centro Vinoteca, but have since disappeared from the market. Here you can see just how well the grape can age in the right hands for $56 and $52, respectively. The rest of the list is studded with gems from Friuli to Calabria, most of which hover between $40 and $50.

The riserva list, however short, is refreshing in its choice to highlight wines that most would not expect to see on a riserva list. Instead of focusing on the obvious (Barolo, Brunello, Super Tuscan), Spagnardi has back vintages of schioppettino from Ronchi di Cialla, and older Etna rossos from Benanti, all right around $100.

If you're looking for the big three, you will find them, but this list is built for those who are looking to peak outside the box. It's the sort of place you can count on for something interesting in the $40 range, brought to you with all of the charm and enthusiasm you could possibly hope for from a neighborhood trattoria.

Bang For Your Buck
Benanti ETNA 'BIANCO DI CASELLE' 2009* $ 44
Benanti is one of Mt. Etna's great producers. This is the estate's entry-level white made from 100 percent carricante and aged exclusively in stainless steel. Just about the best intro to the salinity and minerality of Etna white wine you can find, particularly in this price point.

Pietracupa FIANO DI AVELLINO 2010* $ 50
Pietracupa is responsible for some of Campania's best white wines. Here, fiano from its spiritual home in the cool Avellino region. The Pietracupa wines are reliably pure and mineral-driven, and in the case of the fiano full of smoke and earth. Hell of an argument for the greatness of Campanian white wine at a very fair price.

Il Carpino MALVASIA 2005 $ 52
Super concentrated, turned-up-to-10 take on malvasia from this small producer in the Collio sub-region of Friuli. Great opportunity to see how malvasia evolves with a little time in bottle. The wine has been aged in wood for 12 months and the grapes are sourced from organic vineyards near the Slovenian border.

Fattoria Le Terrazze ROSSO CONERO 2009 $ 46
Though Le Terrazze is best known for their blends "Chaos" and "Planet Waves," the simple Rosso Conero is often the most satisfying. It's 100 percent montepulciano from Le Marche aged in neutral wood. Full-bodied, bright, sluggable.

C. Picariello CAMPANIA ROSSO 2009 $ 40
Great intro to Campanian red. A blend mostly of aglianico with indigenous grapes piedirosso and the rare sciascinoso grape. Grown in a high-altitude, organically-farmed plot above the city of Naples. Trademark earthy funk from aglianico with plenty of black fruit and brisk acidity.

Off The Beaten Path
Castello di Lispida TOCAI (FRIULANO) 'AMPHORA' 2005 $ 48
From the orange wine camp comes one more producer inspired by Friuli's Josko Gravner to make white wine via long skin macerations in clay amphorae. Expect a rust-colored savory wine from the Veneto with lots of dried fruit and earth.

Fattoria San Lorenzo VERICCHIO 'IL SAN LORENZO'1997* $56
Several years back you could find San Lorenzo's back vintage verdicchios on adventurous wine lists throughout the city, but they are an increasingly rare find in the market today. This wine is proof that the grape can age. It spends nearly a decade on the lees and is drinking well now. Rich, smoky, savory.

Under $40
Scala - Calabria ROSATO CIRO D.O.C. 2011 $ 38
Bold, herbal 100 percent gaglioppo rosato from Calabria. Dark in color with enough grip to go with meat and enough freshness to keep it from destroying seafood. Solid bet for the whole meal.

Crowd Pleaser
Colpetrone - Umbria SAGRANTINO DI MONTEFALCO 2007 $ 54
A great value and big wine that manages to stay lithe despite its brawn. Made in an open, softer style that allows for a great intro to this grape at a very generous price and without some of the tannic rusticity that the sagrantino grape is often prone to showing.

Break The Bank
Ronchi di Cialla SCHIOPPETTINO DI CIALLA 1995 $ 116
This is the benchmark producer for this grape variety, which is easily Friuli's most intriguing red grape variety. The winery's owner and winemaker, Paolo Rapuzzi, is responsible for resurrecting this grape variety. In its youth the variety is peppery and herbal a la northern Rhône syrah with brisk acidity and fine, but formidable tannins. In old age the grape is capable of producing wines of longevity that can't help but conjure nebbiolo. This is drinking in a great spot now and is a tremendous value on one of Italy's great, underappreciated wines.

Benanti 'PIETRAMARINA' ETNA BIANCO 2007* $140
Benanti's 'Pietramarina' is easily one of Italy's greatest white wines. It's 100 percent Carricante sourced from one of the active volcano's most distinctive vineyard sites. The vines average around 80-years-old and the wine is tremendously concentrated, floral, and mineral-driven.

WTF?
If anything, it'd be great to see just a touch more depth on the riserva list, especially considering how good the prices are on the current selections.
[Photo]