The Top 10 New York Pizza Feuds of All Time

Share All sharing options for: The Top 10 New York Pizza Feuds of All Time

Pizzeria owners love to fight with each other. Here's a rundown of the 10 greatest restaurant feuds in New York pizza history: 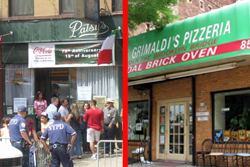 10) Patsy's Pizzeria vs. Patsy Grimaldi: Patsy Grimaldi learned to make pizza from his uncle at Patsy's Pizzeria in Harlem. In 1990, he opened his own coal oven pizzeria in Brooklyn at 19 Old Fulton St., and called it by the same name. After the founder's death, the original establishment as well as its name and branding rights were sold to a corporation who franchised the name to other Manhattan restaurants. In 1995, the corporation sued Patsy Grimaldi for naming his Brooklyn pizzeria Patsy's, causing him to change the name to Grimaldi's. 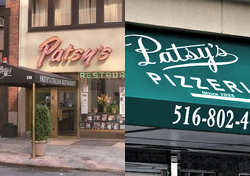 9) Patsy's Italian Restaurant vs. Patsy's Pizzeria: A 2009 trial addressed the ongoing battle between Patsy's Pizzeria on Long Island and Patsy's Italian Restaurant in Midtown. The most recent chapter of the feud began when Patsy's Pizzeria put up an awning with the words "Trattoria Impazzire" (it means "Restaurant Without Competition" in Italian), which owners of Patsy's Italian restaurant claimed would confuse customers into thinking the pizzeria was the Italian restaurant. Because a new awning would cost $20,000, the owners covered the words with a marker and a patch. An unfortunate amount of rain that season washed the cover from the awning shortly after, and the pizzeria eventually replaced the entire thing. 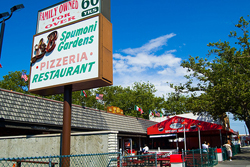 8) The Square vs. L&B Spumoni Gardens: In 2011, alleged mobster Francis Guerra was charged with the beating of Eugene Lombardo, the owner of popular Staten Island pizzeria The Square. Guerra was reportedly defending the honor of his in-laws, who own Brooklyn pizzeria L & B Spumoni Gardens. As the story goes, the owners of L & B claim that Lombardo stole their family recipe. From the Daily News report: "Francis Guerra is also charged with two gangland murders, but his bail hearing was dominated by the pizza hostilities." 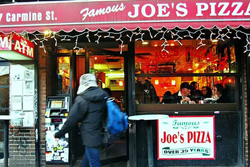 7) Joe's Pizza vs. Joe's Pizza of Bleecker: For more than 35 years, Pino "Joe" Pozzuoli has been operating Joe's Pizza — first on the corner of Bleecker and Carmine, and then three doors down at 7 Carmine Street. With the help of his son Pino Pozzuoli Jr. and his former son-in-law Guiseppe Vitale, Joe's Pizza became a West Village institution. Vitale also owns three other restaurants called Joe's Pizza of Bleecker — one in Brooklyn and two in California. All was going well for the family business until Vitale and Pozzuoli's daughter divorced in 2004. Legal battles ensued between Vitale and Pozzuli over who had rights to the name and the success of Joe's. A federal judge finally ordered Vitale to stop advertising his Brooklyn branch as the original, but allowed him to keep the famous name. After all, what's a little trademark infringement amongst family? 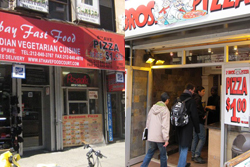 6) Bombay Fast Food/6th Ave Pizza vs. 2 Bros: The New York Times reported earlier this year that the most recent slice war is taking place over on 6th Avenue between Bombay Fast Food/6th Ave. Pizza and their neighbor, 2 Bros Pizza. The feud began last October when 2 Bros moved to the block and began advertising $1 slices. Bombay/6th Ave Pizza, who had recently shrunk their price from $1.50 to $1 to keep up with demand, found themselves losing business to the new chain. The two businesses kept their slice priced at a buck until mid March when they suddenly both began advertising a 75-cent slice. The owners of Bombay/6th Ave claimed that in an effort to put them out of business, 2 Bros had slashed a quarter off their price. When reached for comment, the chain reported that Bombay/6th Ave had actually made the first move by lowering their price to 79 cents, forcing them to match. Claiming it would be easier to make change for a dollar, 2 Bros dropped to 75 cents and Bombay/6th Ave followed. Surveillance cameras confirmed that Bombay/6th Ave was advertising a 79-cent slice while 2 Bros was still at $1. The two competitors are now both losing money but refuse to be the first to return to $1, even claiming they will go lower if that's what it takes. The owner of 2 Bros recently noted: "We might go to free pizza soon." 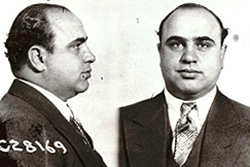 5) Al Capone vs. NYC Pizzerias: It is alleged that in the 1940s, Al Capone began forcing New York Pizzerias to exclusively use mozzarella produced from a string of dairy farms he owned near Fond Du Lac Wisconsin. The product was far inferior to the mozzarella being made in New York, but Capone insisted and even firebombed those pizzerias that refused to use his cheese. Capone made exceptions for a few of the original parlors like John's and Lombardi's, but only if they agreed to never sell their pizza by the slice. To this day, John's of Bleecker Street has "No Slices," posted on its awning. 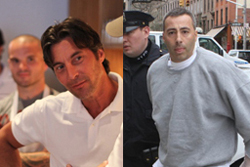 4) Marc Iacono vs. Benny Geritano: In April of last year, Lucali's owner Marc Iacono was stabbed several times on a Carroll Gardens sidewalk by 39-year-old alleged mobster Benny Geritano. The incident spurred rumors of love triangles and mafia ties, and the fight left Iacono in critical condition. Many speculated that Geritano was looking for a piece of the Lucali profits, but all charges were eventually dropped. Geritano has been linked to the Genovese crime family and is on probation until 2013 for a nation-wide bank robbery spree. When asked to comment, Iacono replied, "A mob hit? No?Who said that?" 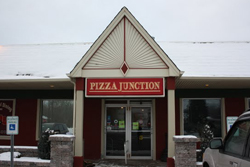 3) Pizza Junction vs. Vito's Pizzeria: In Tonawanda, NY, just North of Buffalo, two feuding parlors are proving that a New York pizza rivalry can exist outside of the five boroughs. In January of this year, former Pizza Junction manager Ryan Fleckenstein was arrested after he drove his car through the sign outside rival pizzeria Vito's. The sign welcomed a former Pizza Junction employee to the Vito's team and stated, "Now serving Junction-style pizza." This wording greatly upset the owners of Pizza Junction and after many verbal warnings, Fleckenstein drove his black jeep onto the sidewalk, warned two teenagers to get out of the way, and then crashed into the sign. Video coverage can be seen here. 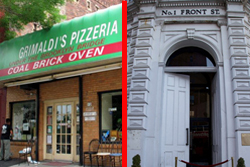 2) Patsy Grimaldi vs. Frank Ciolli: Grimaldi sold his namesake restaurant and rights to Frank Ciolli in 1998. Ciolli stayed in the 19 Old Fulton St. space until last year when landlord disputes drove him to relocate up the street, leaving the coal oven behind. Now, almost 15 years after selling the restaurant, Patsy Grimaldi is returning to his origins and his oven with Juliana, a pizzeria that is opening in the original Grimaldi's space. This is just a few steps away from the new location of Ciolli's pizzeria. Both owners say there is room for two great pizzerias in Dumbo, but we'll see if that's the case when Juliana opens later this year. 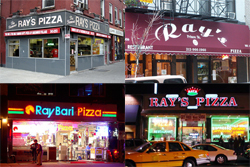 1) Ray's vs. Ray's vs. Ray's: The first Ray's Pizza was started by Ralph Cuomo at 27 Prince Street in 1959. Cuomo opened one other Ray's on 59th Street in the early 1960s and then sold it to Rosolino Mangano in 1964. Mangano then expanded it into the Original Ray's empire, opening dozens of locations in Manhattan. In 1981, Mangano sold one of his Ray's Pizzerias to Gary Esposito who opened up five more Original Ray's. Esposito became curious about who Ray really was, sparking an investigation which led him to 27 Prince St. and Ralph Cuomo. The two agreed to set up a joint company to franchise Ray's. Mangano then spent five years battling the other two "Ray's" in court, until he finally joined their company in 1990. The three designed a common logo and recipe which they licensed to Famous Original Ray Pizza shops, and Mangano himself went from store to store warning unlicensed Ray's of their infractions. The one Ray that put up a fight was Ray Bari who was actually named Joseph Bari and who bought one of Mangano's Ray's in 1973. Bari opened five other locations and named them Ray Bari. The battle between Bari and "The Ray's," turned ugly with both sides making accusations about the other's subpar mozzarella, watery sauces and inferior Sicilian villages. Of Mangano, Bari's sister said, "He put pasta on pizza — write that down." Ray's Pizza on Prince Street closed just last year. When asked about the battle for Ray's, Cuomo noted: "Their pizza gives us a bad name...I don't want to knock anyone else, but there's nothing like our Ray's."
· All Coverage of Pizza Week 2012 [~ENY]
— Hannah Leighton