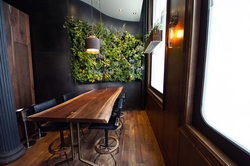 These days, it isn't often that a restaurant opens with five-digit bottles of Romanée-Conti gracing the pages of its wine list. Most have buried those days in the cemetery reserved for other pre-economic meltdown pleasures that now seem nearly comical. But Atera's wine list emerges sepia-tinged amidst a new generation of post-2008 lists that trend shorter and more obscure.

Wine Director Alex LaPratt, formerly of DB Bistro Moderne, is a guy with a long list of aspirations. He loves the sorts of verticals that have come to define high-end wine lists of the 1990s and early aughts, running through his checklist of the many multi-vintage verticals on the way. To some this might seem excessive for a restaurant with 17 seats, to others perhaps pleasantly nostalgic. At present the list hovers around 1,100 selections reaching all the way back to 1890, which he plans to expand, all while continuing to uphold what he believes to be "the lowest markups in the city."

That latter claim certainly rings true for his collection of Riesling, from both Germany and Austria; it is likely the most extensive and affordable collection of mature Riesling in the city. Beyond Germany and Austria, the list is strongest in Champagne and Burgundy, with the other collectible regions like Piemonte and Châteauneuf-du-Pape holding up the balance. A few quirky wines and more obscure regions get representation, but often feel as though they've been left to lurk around in the shadow of the list's grander ambitions.

LaPratt is eager to practically give away the wines of Germany, but his desire to have the lowest markups in the city begins to crumble elsewhere. The pricing, in fact, is a bit erratic, particularly in Burgundy where markups range from well below standard to quite high. Take for example, Georges Roumier's 2007 Bonnes Marres, which is $1,300 here and $695 at Eleven Madison Park, which has long been the most affordable fine-dining list in the city. Same goes for Raveneau's 'Blanchot' from 2000, which is $575 here and $415 at EMP. You will find wines that do dip below standard in this section, but the littering of booby traps makes difficult to be completely confident spending big.

For now feel free to blindly bury your head in Germany, Austria, and Champagne in any price point. In Burgundy you'll win big with a sharp eye and, here and there in the shadows cast by the classics, there are a few wines that will reward the adventurous. It's still clearly a work in progress, but if LaPratt makes good on his quest to have a collection that is as deep as it is cheap, Atera is on its way to housing a wine list—however sepia tinged—that reminds us of what we've been missing.

Bang For Your Buck
Pascal Doquet, Vertus, 1er Cru 1998 $83
It's rare to find vintage Champagne anywhere for under $150 on a list. Doquet is a small producer located in Vertus (near Avize), who took over his estate in 1995. He began farming organically shortly after and has since been making rich wines that spend a considerable amount of time on the lees and are partially aged in wood. This is a terrific introduction to mature Champagne.

Dirler, Riesling "Kessler," Grand Cru 2001 $85
Classic Alsatian riesling from the biodynamic Dirler estate. The 2001s have been drinking very nicely at the moment. One of the many great deals on riesling here.

Weingut Willi Schaefer, "Graacher Himmelreich," Mosel, Kabinett 2001 $70
Willi Schaefer is one of the best winemakers in the Mosel. His are wines of incredible precision and balance and reliable purity. Another great deal on dry riesling from 2001.

Clemens Busch, Vom Roten Schieffer, Mosel-Saar-Ruwer 2005 $80
Clemens Busch is sure to be a name that will become a greater part of our consciousness as more winemakers from the lower Mosel hit the scene. Natural yeasts and organic farming (both still a bit of a rarity here) are the name of the game here. This wine comes from red slate soil, which gives it a bit more oomph and earthiness.

Domaine Thenard, "Cellier aux Moines," 1er Cru Givry 2005 $55
Largely unknown in the US, Thenard has been churning out fantastic traditional Burg from some of the finest vineyards in Burgundy. Rustic, charming wines that are a great value for the coin, here from the hysteria-inducing 2005 vintage.

Domaine Michel Lafarge Bourgogne Rouge 2006 $70
Lafarge produces some of the most stunning classic Burgundy out of Volnay. His lower level wines like the Bourgogne Rouge and Passetoutgrain are always solid go-tos that drink above their respective price points. Here from the very drinkable 2006 vintage.

Domaine Chandon de Briailles, "Île des Vergelesses," 1er Cru 2001 $80
This Burgundy estate in Savigny is both historic and traditional, and this bottling—from the finest 1er Cru vineyard in Pernand-Vergelesses—is in a great spot now at a great price.

Under $40
Benito Santos, "Igrexario de Saiar," Albariño 2009 $35
The entry-level albariño from one of the original growers in Rias Biaxas. All of the grapes are farmed organically and the techniques are traditional. From 2009 this wine fines a nice balance between rich, forward fruit and the sort of high acid characteristic of albariño grown in its spiritual home.

Off The Beaten Path
Henry Marionnet Touraine 1995 $75
Henri Marionnet is one of the Loire's great winemakers and a steward of the region's most obscure grapes. This is his sauvignon blanc with more than a decade and a half in bottle. No telling what it's drinking like but it's certainly a wine worth talking to your sommelier about, especially at this price.

Bodega Maranoñes, Piesdescalzos, Madrid, Albillo 2009 $55
There are different clones of this oft-overlooked variety throughout Spain. Though wines made from albillo can vary in quality, Bodega Maranoñes is committed to showing the best of what the grape can do. The vineyards are farmed organically and fermented with native yeast in barrel. Expect girth, but not without freshness.

Crowd Pleaser
Arnaud Ente, Aligoté 2008 $60
Arnaud Ente is one of the rising stars in Meursault, making pure, mineral-driven wines using traditional techniques. He also makes a mean aligote that gets the same high-brow treatment. Herbaceous, peppery and dense on the palate, with brisk minerality.

Elsewhere:Domaine Ponsot, "Chapelle Chambertin," Grand Cru 2001 $375
Though this isn't in everyone's price point, Ponsot is often worth the splurge. Though this is still quite young, drinking it over the course of the lengthy tasting menu is the best way to experience it.

Bitouzet-Prieur, Meursault "Clos du Cromin" 2004 $100
I love the still-undervalued 2004 whites. The wines are high in acid and are particularly impressive from Meursault where there's more fruit to balance the acid. Solid white Burgundy for the price.

WTF?
Viñatigo, Ycoden Daute Isora, Tintilla 2007 $130
One has to hope that this is a mistake and not a ploy to punish the rare, unsuspecting Canary Islands devotee. This about $100 more than it should be on this list.

· All Editions of Decanted [~ENY~]
[Photo: Brunch in New York]