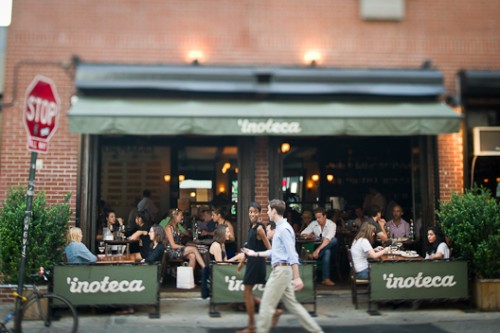 Inoteca Liquori
Back in April 2010, just a month after the Decanted column was launched, Eater took a look at 'Inoteca Liquori's deep and cheap Italian list, then under the watch of sommelier Sean Pearman and partner Joe Denton. Both Denton and Pearman are no longer involved in the restaurant, and have since passed the baton along to Catherine Gerdes, who has spent two years as the sommelier at the downtown location of 'Inoteca. Since taking over nearly a year ago Gerdes has maintained a list that acts as a shorter and more conservative version of the list at 'Inoteca on the LES.

"The clientele at the Murray Hill location are more interested in being comfortable," says Gerdes. "They're not out to try something esoteric or learn something new, necessarily."

Regardless, Gerdes has folded in some Italian esoterica into the list for the Murray Hillian willing to roll the dice on, say, an orange malvasia from Emilia-Romagna. If you're coming here to spend on outer-regional, top-shelf Italian wine, it's still full of wines with skinny mark-ups—especially if you're here past 11 p.m., when the late night list of wines priced close to retail rolls out.

'Inoteca
Gerdes has been at the helm here for about two years. She's maintained the deep list that Denton built up over the last ten years and has added her own stamp on the lower end, where you'll find an eclectic and funky mix of wines. While Gerdes has made the list feel a bit more current, its strength still lies in what's been on it for years, and the sense of nostalgia it will undoubtedly inspire in anyone who's spent the last decade loving Italian wine.