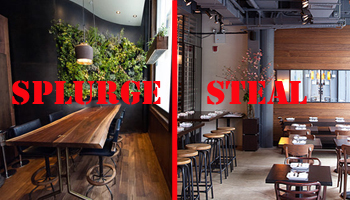 1) Atera/Foragers City Table: Matthew Lightner's Atera is the restaurant that everyone in the food world is buzzing about right now. Lightner's $150 tasting menu is as much educational as it is gastronomically pleasing and course names like "rock" and "charcoal" prove just how seriously Lightner takes his foraging roots. But if no amount of fresh moss is worthy of your $150 ($240 with wine pairing), head uptown to Foragers City Table for an inventive meal that places the same emphasis on straight-from-the-farm ingredients at a fraction of the cost. Produce and eggs at this one-month-old Chelsea restaurant are sourced from their New York farm and the menu provides detailed descriptions of where everything comes from. The fare may not be as intricate as Atera's, but almost everything on the menu is under $20. [Photo, Photo] 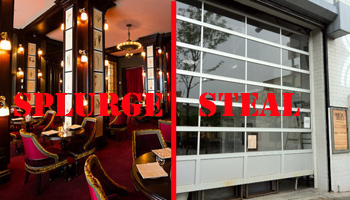 2) The Nomad/Frej: Since opening in March, The Nomad has been wooing big spenders with its sexy decor, $125 tasting menu, foie-stuffed chicken for two ($78), and superb cocktails. Reviews have been glowing and guests don't seem to mind shelling out for Daniel Humm's modern cuisine. But if a $24 asparagus dish is not currently in your budget, consider heading to Williamsburg pop-up Frej for what Pete Wells calls "one of the city’s great bargains in fine dining." Richard Kuo and Fredrik Berselius offer a $45 five-course tasting menu at this Scandinavian-influenced restaurant Monday, Tuesday, and Wednesday nights. For only a few dollars more than the price of an entree at The Nomad, Kuo and Berselius will hand over a well-executed assortment of dishes like beef cooked in hay and scallops with ramps and seaweed. [Photo] 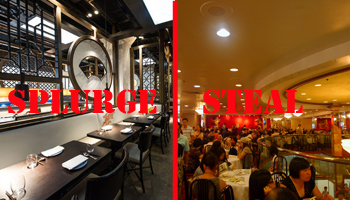 3) Hakkasan/88 Palace: The first New York outpost of fancy pants Chinese chain Hakkasan opened last month in Hell's Kitchen. Though some patrons are pleased with the food, many people feel that it's not worthy of the hefty price tag. Chef Ho Chee Boon, of the original Michelin starred London location, is serving three signature menus that range from $88 to $168 and include dim sum platters. Most a la carte entrees are in the $40-$59 range with a few outliers like a $345 version of Peking duck. On its own, the dim sum platter will run you $28. If spending $12 on hot and sour soup is not in the cards for you but you still want to experience the luxuries of a fine Chinese establishment, consider heading downtown to 88 Palace for a more reasonably priced dim sum meal. Tucked under the Manhattan Bridge on the second floor of a shopping mall, 88 Palace is a sprawling assembly of white tablecloths, carpeted floors and suited servers. With most items (steamed ox-tripe, roast pork buns, steamed spare ribs) set at $1.80, you'd be pressed to spend more than $15 on a feast, which is less than you'll pay for tax on your meal at Hakkasan. [Photo, Photo] 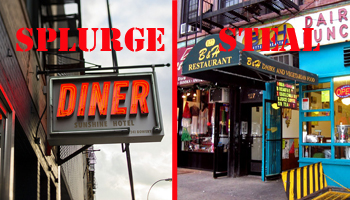 4) Bowery Diner/B&H Dairy:Mathieu Palombino's Bowery Diner has been winning guests over with its vast burger menu ($15-16), breakfast specials ($13-$16), and late hours. But if you're looking for solid comfort food at a slightly lower price point, consider B & H Diary on 2nd Ave. At this 75-year-old lunch counter, you'll find diner staples like grilled cheese ($4), omelettes ($6-$8) and a long list of soups for $4.25 a cup. The space is small and has many of the charms that can only come with age. Although they don't operate 24 hours a day like the Bowery Diner, B & H is open until 11:30 p.m. weeknights and midnight on the weekends. [Photo, Photo] 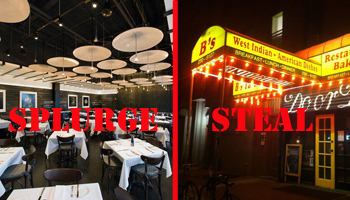 5) North End Grill/Do or Dine: At Danny Meyer's newest restaurant, North End Grill, Chef Floyd Cardoz serves a clean, continental menu that focuses on classic dishes with his own interesting twist. Cardoz has left behind his signature dishes from Tabla, but the flavors and the spices are still there. The menu is diverse and not rooted in one particular cuisine. Most of the appetizers are priced in the teens, and entrees can stretch into mid 30s. Also, a section of the menu labeled "X2" offers a whole black bass for $60 and a char grilled Elysian leg of lamb for $56. But if you seek a multifarious and well-executed meal at a lower cost, consider heading to Do or Dine in Bed-Stuy where you'll find duck breasts, pork chops, and steaks for around $20. Preparations are unusual (the chop comes with cactus and yuca, the duck with kiwi, sansho, and fennel), and the atmosphere is far more eclectic. But like North End Grill, the menu at Do or Dine is vast and borderless. Justin Warner and George McNeese, who both worked for Meyer at the Modern and now run the kitchen at Do or Dine, have created a menu that is both stimulating and creative. Make sure to order a few small plates like the foie gras doughnut or frogs legs with a spicy Dr. Pepper glaze, which are $11 and $8 respectively. [Photo, Photo]