Share All sharing options for: David Bouley Takes Stock as Brushstroke Turns One 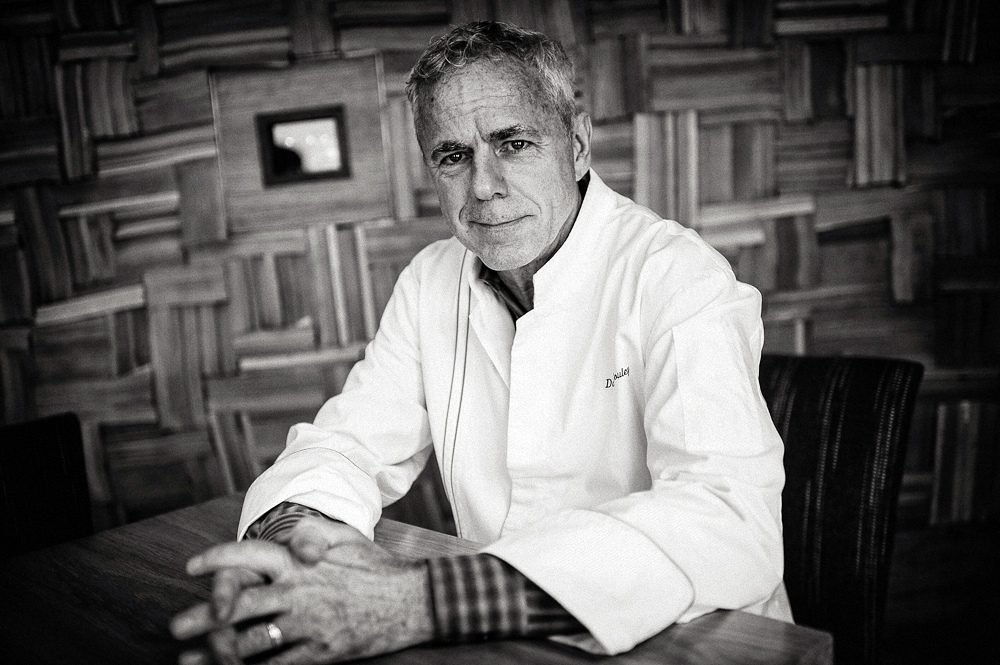 [Krieger, 05/25/12]
After years of delays, David Bouley finally opened his ambitious Japanese project Brushstroke last spring. A collaborative effort between Bouley and the Tsuji Culinary Institute in Osaka, the restaurant drew favorable reviews for its kaiseki-style dishes. Like many things in the Bouley empire, the restaurant is constantly evolving. Recently, Bouley added a sushi bar helmed by chef Eiji Ichimura, and he's working on a private dining room space that will be used for special dinners and demonstrations. Eater recently chatted with Bouley about how the restaurant has changed over the last year, and what he's working on at Brushstroke right now.

When was the first time that you thought about doing a Japanese restaurant with Yoshiki Tsuji and the Tsuji Institute? David Bouley, owner: Mr. Tsuji and I were talking about doing a restaurant probably five and a half years ago. We had been doing a lot of testing with no idea that we'd ever open a restaurant. He loves New York. We share a lot of the same passion in terms of food, and he's a great teacher.

Did you ever feel like you had to compromise your original vision for this restaurant? Maybe make it more palatable to New York diners? This is a very complex audience. Even at one table, you could be across the spectrum of tastes and lifestyles — they're all there. I always tell people that the first Bouley restaurant was trying to create something that the most jaded critic and the guy that was delivering the product in the morning could both go crazy for. We try to stay with that. And then sometimes you have people that totally challenge you and you listen to them and you accept that challenge. So not really, but we're editing as we go.

Were you disappointed when Adam Platt and Sam Sifton didn't give you three stars? I don't really read all those things. I'll be straight — I never read those things. Everybody always talks about that in the first place — did you always want to be number one? I never really thought about it because it's a dangerous thing to think about. A lot of people in the theater told me the same thing — don't read the good because it makes you comfortable, and don't read the bad because it makes you crazy. Just read what's inside and follow that.

New York magazine took a star away because we didn't have enough sushi or something. In Japan, you don't go to a restaurant and have many things together — they specialize in everything. Going to a cooking restaurant and asking for sushi is like going to a pizza restaurant and asking for a risotto. So, I couldn't understand why they couldn't understand that. That was the only confusion. But that's nothing new, and we certainly have been experienced with that enough to know that it can't bother you.

With good reviewers, we learn a lot of things because of their interpretation, or maybe sometimes a criticism. But I don't really read them. I stopped reading them years ago. I don't think I've even read the four star reviews — maybe I looked at them, but they say good things and we're happy with it. But it can be distracting. Keep moving, pay attention, and know that you can do it better every day. That's what's important, and that's what gets you out of bed every morning.

On the business side of things, were you ever worried that this concept might not work? I've been in business for 25 years this year. 40 years in cooking. I've learned a few things about making sure you don't do something stupid. But I've also learned that I'm never going to know it all. Just go in there and begin. Study every day. Understand where you are, because nobody's going to tell you that they have the perfect formula. The only way to do it is to pay attention and accept an error so you can learn from it. Keep moving. In our industry, you have to know what your market is. Study the prices. Keep food costs and payroll in mind. You don't have the answers. I wish you could, but I don't think you ever really do. You have to learn from errors you made — that makes you stronger. You just can't go there anymore.

Where do you feel like you are after one year here, in terms of your initial goals for this project? We're on track. We're learning from the customers about what they're looking for. From the whole business point, we found out what we needed. We found out what the customers wanted, and we cleared up our mission — a Japanese restaurant and sushi. Now we can have two clear focuses so we can really grow them.

When did you reach out to Eiji Ichimura about becoming the sushi chef at Brushstroke? He kinda fell into our hands. It worked like that.

Were you a fan of his food? I didn't really know him before. I didn't eat in his restaurant. But all it took was a few things and I felt like I knew him.

Do you think this will always be a work in progress? Most times we'll continue to evolve. We're putting in a private dining room as well. I'm not sure when it will come about. We're slowly putting it together, but it's clear what we want to do. It will be a dining room that will also be for demonstrations, with windows made of that glass that turns gray or clear when you flip a switch. Sometimes we'll Skype with folks. There will be documentaries, and there may be holograms showing some of the things that are happening in Japan. We want to get to a point in the private room that also corresponds to all the health benefits of this food, or how you can do this at home.

I always tell this one story. When I was seven or eight, we had a farm with chickens, ducks, pheasants, and plenty of trees. I was pulling a peach off a branch, and the branch was bending down. My mother took my hand, put it on another peach, and pushed it up. And when she took my hand down, the peach was sitting there. She said, "That's the peach to eat now." And when I ate it, she had to put the hose on me because I was dripping — everywhere I was sticky from the peach. So how can you walk away from that? The enlightenment of a little experience like that. I think that those experiences stay with you forever. They create what we call "cravings." A lot of intellectually composed food doesn't do that.

I think a lot of people would consider this to be intellectual or high minded cuisine. Would you say that's a misconception? You feed the intellect with nourishment. From a point of entertainment, there are certain foods that are produced that are more scintillating for the intellect than they are nourishing for the body. So, this food is not that. But all the senses are clearly rewarded with kaiseki cooking, with great impact.

Does it feel like it's been a year? I'm always amazed at how quickly time's gone by. If you asked me to measure where our goals are? I think we're about where we thought we would be in terms of getting a lot of regulars coming in. Now we can share things with them, and we're learning a lot about their palates. Everything you're doing is for them. And the more you see the same ones over and over again and you develop that relationship, the more power you have. You have more fun, too.
· All Coverage of Brushstroke [~ENY~]