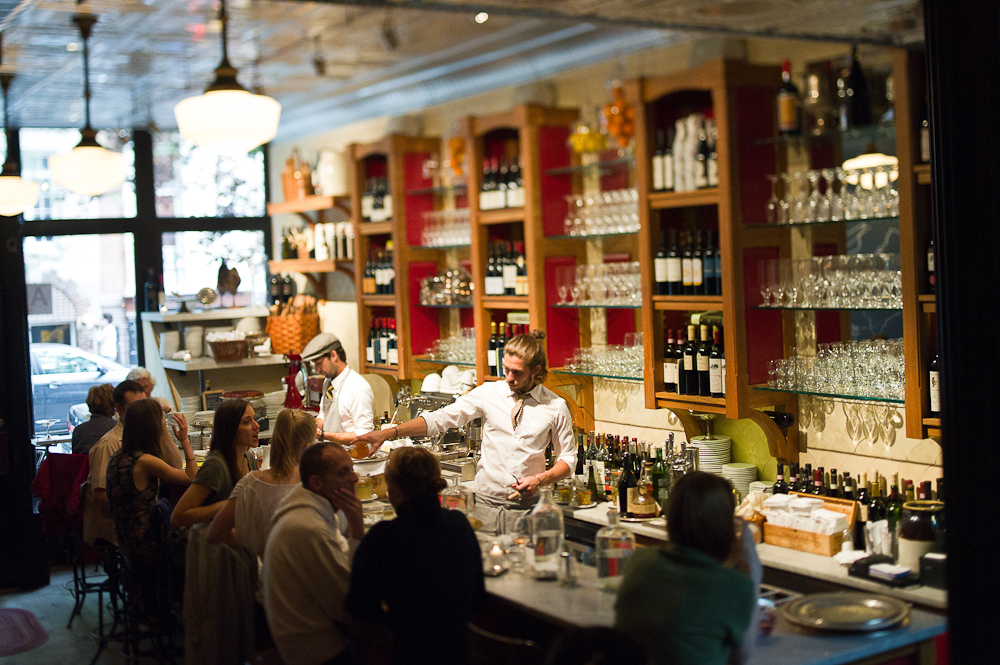 Buvette's wine list is a 6 1/2 x 4-inch book with maps and illustrations depicting tiny farmers with hoes and horse-drawn carriages. Inspired by vintage almanacs and other old, twee things, chef Jody Williams has assembled an adorable "Petit Répertoire Illustré" or, "An Illustrated Guide" to wine.

She describes herself as a wine novice, and the book as an ever-evolving snapshot of what interests her at the moment. What makes it so appealing, though, is Williams' wide-eyed enthusiasm and ability to communicate the allure of wine—the places, movements, and histories that draw people to it—through the wine list. It's the sort of thing that will make anyone who has come to know wine well wish they could start all over from the beginning again.

The book dedicates pages to producers, places, and even helpful hints on how to cure a hangover, remove red wine stains, or make a proper martini. There is a "Vins Naturels" page that showcases one natural wine producer (at the moment it is Olivier Cousin) and a brand new "Goût de Terroir" ("Taste of the Earth") page that separates wines by soil type (clay, limestone, volcanic). On the backside of the "Goût de Terroir" page, there's a section dedicated to a few wines that are sourced from vines more than 100 years-old, and further back, an "Islands" page that presents a producer each from Corsica, Sardegna, and Sicily.

All of it feels at home at Buvette. It's the sort of place that isn't about high-end wine, or fancy glassware—it's a place you go to drink Beaujolais, or Bugey-Cerdon on ice, maybe talk a bit too loud, and eat rillettes. It's perpetually packed and there's an authenticity to the clank of glassware and conviviality of the place that reminds you, as you look out on to a tree-lined Grove Street, that the West Village can often rival the best of what Western Europe has to offer.

The selection of wines is well chosen with a clear preference toward the more traditional wines of both Italy and France. There are around 25 wines by the glass or 8oz. carafe, but many are priced a bit high. The best bet is to go by the bottle; not only will you want to sit here awhile, but the bottle prices are much more forgiving. There are around 100 selections that rotate frequently and Williams has proven that, novice or not, she has a sixth sense when it comes to good wine.

But the list's great achievement isn't really about the selections or the adorableness of book (which, by the way, comes courtesy of designer Max Poglia), but how it proves, confidently, that a wine list can be much more than just a list.

Bang For Your Buck
Patrick Bottex, Vin du Bugey-0Cerdon Rosé, Demi Sec, NV $49
One of the absolute best wines to drink with warm weather. This is a blend of Gamay and Poulsard—which speaks to the geographical location of Bugey, between Burgundy and the Jura—produced via the méthode ancestrale. The wine is fermented in old oak barrels and is bottled before dryness. The wine finishes in bottle and traps the CO2, creating bubbles. This is slightly sweet and, thanks to Williams' recommendation, delicious on ice.

Maison Arretxea, Irouléguy Blanc, 2010 $61
Irouléguy is a tiny village of fewer than 250 people in France's Basque country. This is a blend of petit courbu, gros manseng and petit manseng from high-altitude, terraced vineyards. The wine is aged in a combination of foudres and steel on the lees for just under a year. Hearty, aromatic, with a waxy palate and diligent acidity.

Olivier Cousin, Gamay VDT, 2010 $50
The ultimate pâte wine. Bright, minerally, slammable gamay from the Loire. This is located on "Vin Naturels" page, which is currently paying tribute to Olivier Cousin. The vines are planted in a combination of sand and limestone and are handled minimally in the cellar.

Under $40
Christian Venier, Cheverney Blanc, "Les Carteries" 2010 $37
Christian Venier is one of a handful of the producers in the Loire Valley working old Loire Valley grape varieties clinging to the edge of extinction. Here he blends sauvignon gris or fié gris with chardonnay. Venier, inspired by his friend and mentor Thierry Puzelat, handles the wine minimally, ferments with native yeast, and adds little to no SO2 to the wines. It's bottled unfined and unfiltered and can tend toward cloudy. Enter with an open mind and the expectation of minerality over fruit.

Off The Beaten Path
Andrea Calek, VDP de L'Ardèche, "Blonde" NV $53
Though this has been in heavy rotation downtown for a couple years now, it's still a wine that remains very far outside the mainstream. A card-carrying member of France's lunatic periphery, Calek is as fringe as they come. He lives in a trailer amongst his vines in the Ardèche (SW France), but his wines—when he nails them—are beautiful, raw representations of the varietals and their terroir. Here a cloudy cider-like petillant naturel wine, which is basically the same thing as a méthode ancestrale wine (see Bottex above).

Break The Bank
There are a few options in the $100 range, but here you're better off staying between $40-75. If you must splurge, head to the magnum section, where you'll find Montevertine's 2007 Le Pergole Torte for $165. While the wine still has miles to go, this is a great value if you're traveling with a group.

· All Editions of Decanted [~ENY~]
[Krieger]