Share All sharing options for: Prime Burger to Close Saturday, May Relocate Soon

Eater reported some sad news earlier this week: the end is near for Midtown's Prime Burger. Yesterday, co-owner Michael DiMiceli confirmed that after 74 years in business, the burger joint is reluctantly closing its doors on Saturday, May 26 around 5 p.m. Here's what he had to say:

The building's been sold. We had an agreement with the new owners to stay here longer, but those agreements fell through. They decided that they don't want us here as tenants anymore. I just found out about this the weekend before last.

We knew the building was going to be sold and that we’d have to close after a while. We were going to take some time to look for a new space, but this all happened so quickly. We just haven’t been able to figure it out yet. The way it happened, it wasn’t great, but in the end, with the building being sold, it was out of my control. And that’s what happened. We just thought we’d be able to stay with the new owners, but it didn’t work out like that.


No word yet on what will take the place of the burger joint, but the DiMiceli brothers hope to reopen Prime Burger in a new location as soon as possible. Michael notes:

I’d like to keep it right around here, but with the way rents are these days, I don’t know...I’ve got a great crew. We’ve got a lot of guys who’ve been here a long, long time and they all work hard. I definitely want to take them all with me. As soon as I find a spot, every single one of these guys is going to get a phone call from me 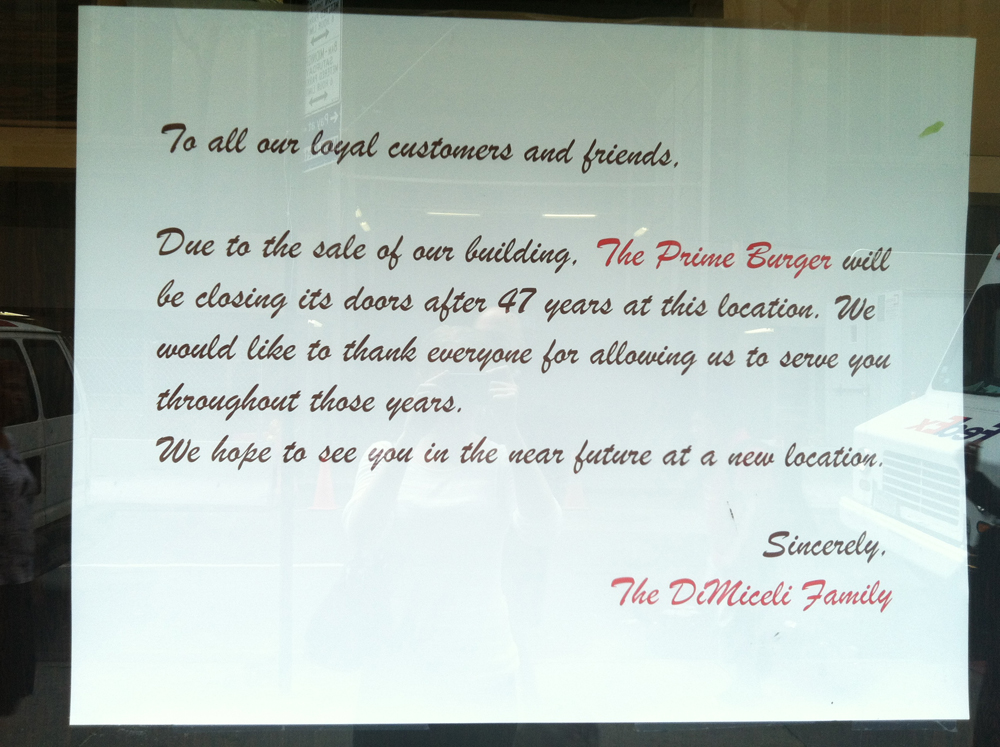 Eater sat down with a few of the guys from the Prime Burger crew to find out what it's been like to work there all these years, and how they feel about saying goodbye.

This isn't easy to talk about. I'm sad. This was my first job. I started with [Michael] more than 20 years ago as a delivery boy. I kept watching everything, learning. He kept pushing me, teaching me everything. And I eventually became the night manager. You know, we spend more time together than we do with our own families. It's always been like a big family here — employees, customers. The customers come in every day, sometimes for breakfast and again for lunch. Some, I don’t even give menus. I just know what they want. They know my family, I know theirs. I'll miss this family. And Michael? He has a big heart - always taking care of us all. It's just tough.

A favorite customer of mine is Sarah Jessica Parker. I've served her a couple times. She’s a very nice, sweet girl. I thought she’d want a fork and knife, but no. She just went for it. A hamburger, chili con carne, homemade onion rings...She loves to come here once in awhile for a burger – where she’s going to go now?

I’ve been here too long. 22 years. I'll miss coming in here every day and seeing the customers and the camaraderie with the crew. I'm a personality guy. I enjoy socializing with people. I’ve had people coming here since they were kids — over 30 years now. We've had customers from all over — Virginia, Australia, Brazil. They come for our burgers. They’ve read somewhere that they're the best so they come and eat and buy a shirt. Then, when they get home, they send us a photo of them wearing the shirts. It's fun. All my memories here have been good. It’s not like work here. It’s like coming to meet your friends every day.

I'm worried about some of the guys. Some of them, this is the only job they’ve ever had. Where do you see that? Everyone’s been here a long time and now? I say it’s all just part of life – the bad, the good. But the guys with kids, it’s going to be difficult for them. I don't know what they're going to do. Yesterday, my wife said to me, "Something’s not right with this." But this how it is. It was a shock.

I've got a whole lot of good memories. I've been here since 1982, when I was 22. Started in the kitchen. I've met a lot of good people. I've seen the Pope three times. Giuliani. Basketball players come in and I'll joke with them. And the customers, you know, they've seen my kids grow up. A lot of fun's been had here.

I don't know what's coming in here after, or what I'm going to do next. I have some ideas, but I hope we can figure something out for Prime Burger. Yesterday it just hit me. I mean, these guys, they're like my brothers. We don't always get along, but we always figure it out. We're always here for each other. We've seen it all — 9/11, St. Patrick's Day parades, many Christmases, subway strikes. And Michael and John — they've been good to us. I remember, during the subway strike, they put us all up in a hotel so we could come in and work. Michael picked us all up in his station wagon and brought us to a hotel. That's just who they are. I'm going to miss these guys.

Oh, I've been here 42 years. Second longest here. I’ll be sad to see this go. I mean come on – we got the music going all day. I like to sing. It’s not going to be easy, this transition. Oh man, I’ll miss the music, the camaraderie. The crew. I’ve known these guys forever. I know all of them – the new ones, the old timers. This is like leaving a neighborhood almost. We smile, we laugh, but without the Prime Burger, we’re not going to be the same. If you were to ask me just a few days ago, I’d say Prime Burger, we’re not going anywhere. We’re just used to being here. This is what we do.

I’m here 36 years. The store’s been here since 1938. I have guys here — see that guy back there with the shaved head? He started working here in 1952. And he’s worked here every day since. It’s amazing. Neil — I've known him all my life. He and my father were partners when they were 19 years old. He's 82 now. That’s how long I’ve known him. He was there when I was born. A lot of history has gone on here, a lot of tradition. It’s a shame it's over. These guys, they’re not just employees, they’re family to me. Four of my guys, I’ve known for more than 30 years. I grew up with these guys. They saw my kids grow up. It’s unbelievable.