Aaron Polsky of Amor y Amargo in the East Village

Share All sharing options for: Aaron Polsky of Amor y Amargo in the East Village 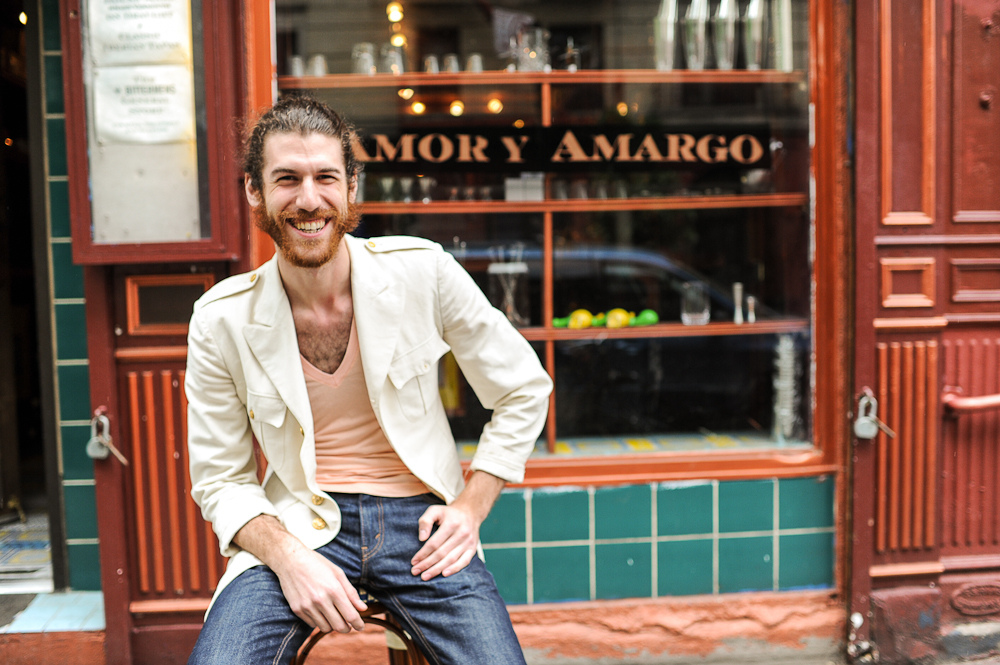 Amor y Amargo (Love and Bitters) opened last year as a joint venture between the owners of Cienfuegos (located upstairs) and Avery Glasser, owner of Bittermens. It's the first bar to ever focus exclusively on bitters, and since the place swung its doors open, the eight-seat bar has been perpetually packed. We spoke with bartender Aaron Polsky about what, aside from the obvious, makes Amor y Amargo unique, how Sasha Petraske gave him the sink or swim at White Star, and how wine and food inform what he does.

How did you get into bartending? Well, I first got into wine and food working at Thomas Keller's Bouchon Bakery as a food runner while I was at NYU. Towards the end of college I took a semester off to go to cooking school in Paris. I came back and worked in several restaurants before landing a job as a host at Milk & Honey. I was there on a slow night taking reservations on the Blackberry and Sasha texts me and is like, "Hey it's slow over there can you come be my barback at White Star?"

Had you ever bartended before? I had never barbacked, let alone bartended before. And he was like, "Here's how the dishwasher works—just bring me fresh glasses." And half an hour later he gives me a jigger and tells me to fill a bottle of rye with water and practice my one-ounce pour. Then he goes, "I'm pretty hungry, I am gonna go to Veselka for a burger—you got this?" That's how it started. And White Star became the place that I really learned. Eventually it grew into a cocktail bar that was more like Little Branch with built cocktails and citrus, and so on.

How did you deal with the learning curve at a place like that? I remember Eamon Rockey [then a bartender and captain at Eleven Madison Park] used to come into White Star after work and in the beginning he'd come in and say, "Can I have an Aviation?" And I was like, "Maybe," and I looked through the specs. "No, we don't have violette." And he'd say, "Can I get a 20th Century?" And I'd look up the specs and we wouldn't have cacao. It it'd go like that. After that first time, he came two days later and he showed up with a bottle of violette, which was awesome. But the way he tells it, I was really terrible then, but he still came to shoot the shit and I basically learned through situations like that. But I definitely had to look up every other cocktail I made.

You mentioned that you used to be the sommelier at Jack's Luxury Oyster Bar. How did that come about and did you ever think you wanted to work in wine instead? Jack really let me run that program shortly after my 21st birthday. I knew very little. When I worked at Bouchon we only had 15 wines by the glass and I was only 18, but Paul Roberts [then the corporate wine director for the Keller restaurants] was a Master Sommelier and he used that template to teach. It really laid a foundation for me. So, I came to wine first really and in a way it was more accessible for me. You know the difference between 2006 and 2008 in the world of cocktails [in NYC] is huge. In 2006 cocktails were starting to happen in a high quality way, but in very few places. So, it wasn't as easy to access or understand.

Do you think wine has informed your work behind the bar at all or your approach to cocktails? With wine – as with cocktails and food – it's about balance. In wine you know if you don't have structure and acidity to balance the alcohol and body of the wine, then it's flabby. But you also don't want acid that isn't integrated. Same goes for cocktails. If you can taste acid that's out of balance in wine, you can taste the same thing in a cocktail. So wine helps with tasting and quality control, but cooking is what's really informed the way I approach cocktails. Creating a drink is a lot like going to the farmer's market and seeing an item is that inspires you, picking out other ingredients to complement, and then going home and looking in your spice cabinet in order to put together a dish. How does that process work with a cocktail? With cocktails, as with food, the flavor pairings are instinctual and the recipe is based on templates. So, like, I know that a negroni consists of one spirit, one bitter, and one vermouth. So, from that point I'll find my starting point for the variation – here it would generally be one of our amari – think of a spirit that might go well, and then I'll go to bitters to season it.

So every drink at Amor y Amargo has bitters in it in one form or another. Do people know when they come here that this is a "bitters bar"? Less than half don't know that. The rest just know it's a good bar—meaning a bar with a high Yelp score. But of the people who don't know, only 5 percent leave. People might come here looking for a Moscow Mule or margarita or a daiquiri. Bitter, of all the flavors, is the least accessible, but you see people within a couple visits going from drinking a Citron Collins, which is our lightest drink, to negronis.

Outside the obvious, what do you think Amor y Amargo does different than other bars? I think we are really making cocktails accessible with a menu that really is not. To Avery [Glasser], part-owner of Amor y Amargo and owner of Bittermans, it's really important that we wear street clothes and play our own music and that we're friendly. He doesn't want us to wear suspenders and arm garters and stuff. There's already so much that's intimidating here, the last thing we want to do is sit here and twirl our mustaches and say, [in a vaguely transatlantic accent] "Oh, you don't know Zucca Amaro?"

How would you compare the scene in 2006 vs. now? There are a lot more cocktail bars and very good ones. People are becoming more experimental. You see more savory ingredients—vegetables, sherry—and a lot more apertif wines in cocktails. One big change: producers are now making products specifically for bartenders, not for consumers. They're doing research and they're finding out how something was made in the era that Jerry Thomas wrote his book and they are trying to replicate that. Also, five or six years ago using all fresh juices and garnishes and syrups in a busy bar... it was tough. Now there are places like Mother's Ruin that pack it in and still make amazing cocktails. So a lot of places have figured out how to do that. I also think cocktail bars are much more accessible now from both sides. People are much more open and so are bartenders.

What's the busiest day andtime? Weekends 9 p.m. - 12 a.m. On a weekend night it's just amazing how many people can fit into this tiny space. What's the best time to come? Dinnertime during the week. 7-9 p.m.. That's when you can actually grab a seat and have a conversation.

What do you think is Amor y Amargo's signature drink? The Eight Amaro Sazerac, which is essentially eight different amari replacing the rye in a sazerac. No one can get that anywhere else. Or the gin and tonic. There's no tonic water, which seems simple, but blows minds.

What's your favorite drink to make? I really love making drinks from our menu, or in our style, that really suit someone's tastes. I think it's really important for a bar with an identity to be able to protect its style and make the guest really happy at the same time. I am not a believer in the "just have one thing for those people" attitude. I want to introduce "those people" to what we do, and work hard to make something they like based on what they've told me.