Share All sharing options for: The CB 3 Approves Matt Levine, Zaragoza, and Nicoletta 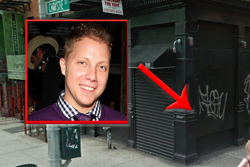 Clocking in at three and a half hours, last night's Community Board 3 meeting tackled a number of big bars and restaurants. Here’s the first word on five notable projects:

1) To be Determined, 205 Chrystie Street: Sons of Essex owner Matt Levine asked the board for a liquor license for his upcoming two-story “cocktail bodega” with a proposed Jamba Juice-esque smoothie shop on the ground floor and a restaurant/lounge downstairs, with the whole operation staying open from noon to 4 a.m. seven days a week. Worried that the location would be more of a club than a restaurant, the board voted to grant a license as long as Levine adheres to a host of stipulations, including serving food at all hours of operation, no use of promoters, and recorded music only upstairs.

2) Paulaner Brauhaus, 265-267 Bowery: Owners of the project defended the restaurant and microbrewery, which will clock in at a whopping 4,000 square feet, as a “family style” restaurant that will serve breakfast, lunch, and dinner and maintain relatively tame hours, opening at 7 a.m. and closing at midnight on weeknights and 1 a.m. on weekends.

Despite an endorsement from a representative of the residents of 267 Bowery, however, several other potential neighbors complained about receiving little to no information about the project besides a barely-visible storefront sign. Comparing Paulaner to previously approved and similarly ambitious projects like the Bowery Diner, the board suggested that the owners step up their level of community outreach before they voted to approve a beer and wine license, saying, "We’re not going to prevent you from getting your license when you need it. Just sit down and talk with them."

4) Zaragoza Mexican Deli, 215 Avenue A: Finally, Alphabet City bodega and taqueria Zaragoza asked the board for a renewal of its beer license, which it had accidentally let expire in July. Zaragoza received a citation in August which some members of the board believed to be for selling alcohol to a minor, but the owner insisted was for an unlicensed sale. The board voted to approve the renewal, but included language in the motion that acknowledged Zaragoza’s previous violation and warned the owner that although they were being lenient because of the bodega’s role in the community, they shouldn’t underestimate the “enormity” of unlicensed alcohol sales in the board’s eyes.

5) The Standard East Village, 25 Cooper Square: And as noted earlier, Andre Balazs showed up in person last night to defend significant proposed alterations to his newest Standard hotel. The hotel’s restaurant space will remain the same, but the indoor/outdoor café on the second floor will be moved downstairs into the current lobby space. The lobby will then be moved into what is now the garden facing 5th Street, converting 60 percent of it into indoor space with the addition of an 18-stool service bar. Two residents of 27 Cooper Square, the building enclosed by the hotel, voiced concerns about possible congestion and noise, but the board noted that over 100 residents of 5th Street had signed a petition in favor of the alterations and that most of the residents’ proposed measures were already covered by existing stipulations. The board ultimately voted to approve the roughly 1,000 square foot expansion.
— Alison Herman
· All Coverage of First Word [~ENY~]