Pete Entner & Glen Hudson on the Success of Pete Zaaz

Share All sharing options for: Pete Entner & Glen Hudson on the Success of Pete Zaaz 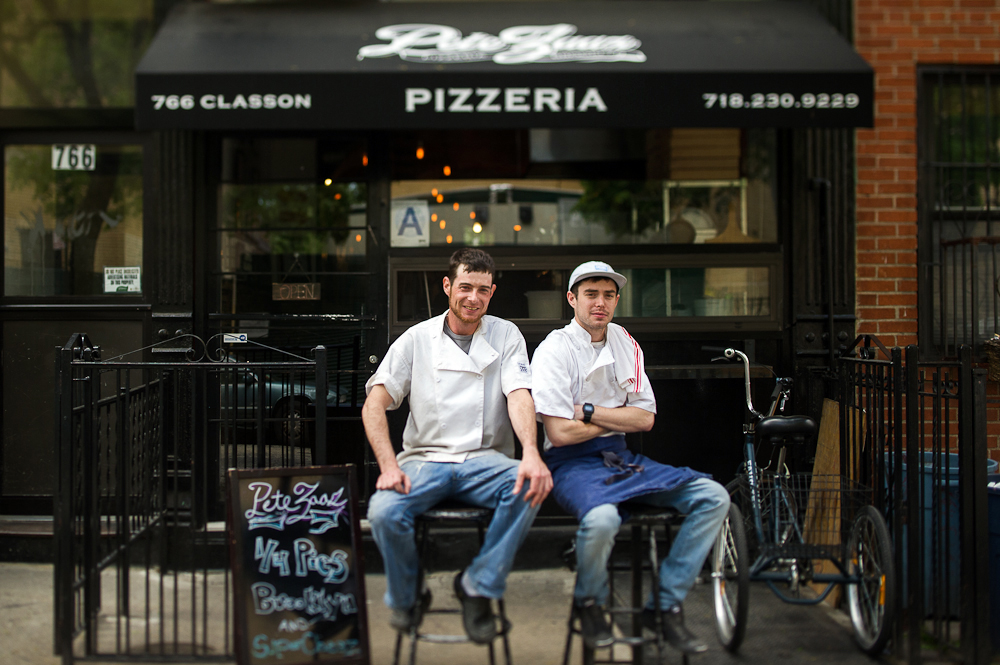 [Glen Hudson and Peter Entner Krieger]
Pete Entner, former sous chef at No. 7, is the co-owner of the newish Crown Heights pizzeria Pete Zaaz along with best buddy and dough-man Glen Hudson, formerly of Pulino's. The pair are bringing bold ingredients like General Tso's tofu, cold fried chicken, and cream cheese burrata to a neighborhood that's seen nothing like it before. So far, the wacked-out pie joint's been selling the doughy rounds faster than the guys can make them. One thing's for certain: people definitely don't seem married to the idea that a classic pepperoni or a slice of plain is the only way to go.

How did you first get the idea for this restaurant? Pete Entner, owner: Well, I first got the idea because this was No. 7’s bakery for the sub shop, and it didn't work out for them. I had talked about turning it into a pizzeria because it already had the baker's ovens. Then I met Glen when we worked at Porterhouse. He had brought most of Nate Appleman’s team from Pulino's over when they all got wiped out. I was like, "Let me test out your dough." I loved it, because it was simple. I love Wonderbread, white bread. Best shit out there besides potato bread. Glen's dough is like that, just simple. Then we got together, we made a business plan, and we went out searching for some guys with money and we found them.

Why make these crazy pizzas and not more classic pies? Pete: Well that's the way I was trained and it’s more exciting. I worked for Tyler Kord, for three years and they called him the Willy Wonka of sandwich making. I was his sous chef before this. At one point, 90 percent of the menu at No. 7 was mine, and I was just trained that way. I love cooking that way. It’s more fun.

Do you feel like people are responding well to that? Pete: Yes, I mean they labeled our food for hipsters, stoners, and thugs. Which is cool. Who else is there that can say that?

What have you learned since opening just a little more than four months ago? Pete: Psssh, a bunch of shit. I mean we learn every day. It’s never ending. We built this place ourselves too. Not only did we learn how to put oak floors down, we learned how to weld steel countertops, you know? That was our motto here, just do it. Just get it done. Just do it.

The entire physical build was just you guys? Pete: Yeah, we built everything here. We drew the blueprints, everything. Even the backyard. It was just a bunch of rubbish. We built the deck, put up a movie screen, planted the herb garden. The floor is from my friend's deck in his backyard. The bar is from a ripped up brownstone in Park Slope. Me and Glen drove out to Philadelphia to get the other wall, and the shelving units are from Swizz Beatz’s recording studio. A graffiti artist and friend of ours from Philadelphia painted the ceiling. We wired the lights piece by piece, and that itself was two days worth of work. These are old church pews, the tables were free from the new sub shop. We did everything on bare minimum. Glen Hudson, owner/pizzaiolo: We stretched a budget out and basically doubled its worth.

What is your favorite pizza on the menu right now? Pete: I like one half baked potato [purple potatoes, creme fraiche, white cheddar, bacon, and green onions] and the other half sausage and mushroom on our Brooklyn pie. Oh, and our new Mexican chorizo pizza is really awesome too. It’s like a cheesy enchilada with chorizo.Glen: I like a Brooklyn with sausage and Sriracha, that’s it for me.

Where do you get your chorizo? Pete: We make it. That’s one of our things here, we make everything from scratch. We make our cheese here at least twice a day, we grind all of our sausage from our sweet Italian to our chorizo. We were even casing it at one point, when we had a sausage and pepper pie on the menu.

What are your favorite pizzas around town? Glen: We like Speedy Romeo. Pete: Yeah, we really do, Justin [Bazdarich] is one of my good friends. I also like Roberta’s to hang out at. Glen: We met those guys at a party. They were really cool. They were actually giving me mad tips on how to make more money and stuff like that.

So it’s a loving pizza community? Pete: Exactly. Well we're also not doing what anyone else is with pizza. I mean the closest thing would be Paulie Gee’s maybe, and then maybe California Pizza Kitchen, but that’s a nasty chain. Two Boots, but they only do Cajun style. We did a "Shrimpy Linguica" pizza. That was awesome. We made the sauce out of split peas. Glen: That really was a good one.

What are your least favorite pizzas, trends, or styles around town? Glen: Okay, I’ll say this. There is a certain place in Brooklyn, and there are a couple of other places that aren’t as bad, where they tend to just crank their oven all the way up and try to see how fast they can cook the pizza. What ends up happening is all these charred, bubbly parts, but you wind up with the middle of the pie not being finished. So it comes out all crispy, but by the time it gets to your table and sits there for a minute, it’s just like this soggy, mushy disk that you have to eat with a fork. This is a trend I’ve seen happen a lot. I was really mad about it when I moved here. I kept getting this burnt, charred-up pizza, and I was like, "Well you know, I can’t find decent pizza here, so I'll start making it myself." There are two or three places I could say their names, but I won’t. Pete: Yeah, I ain’t saying no names. No names here.

Is your oven just gas? Pete: Yeah, it's gas. It’s the only gas we have here. One of our problems is that we have no open flame. Our oven is concealed flame, so we use induction burners. It's not like regular cooking. We’re braising all our sauces, cooking our potatoes on sheet trays au gratin style. It's really rugged. Glen: We try to cook everything we can in the oven. We can make a lot of stuff happen at one time in there. We brainstorm and we figure out how to make it work. We were frying shrimp in there at one point. Before we opened up, Pete asked me to make a caramel sauce, but both induction burners were taken up. I went,"Well, I’m making caramel in the oven now." I did it, and it works. It takes some skill, and it makes everything a lot more dangerous. We're dealing with larger containers and hotter things so we have to be really careful.

Any plans for the future? Pete: We definitely need a production kitchen because we are getting overwhelmed with the space. On Saturday and Sunday, our quota was 65 pizzas and we sold 150. If we get a phone call at 6 p.m. or 7 p.m. for 10 or 15 pies, that cleans us out. Because we've used all of our space for our dough bins until that time and then it's still going to take three more hours to make any more. So you never had the space to make more anyway. We are going to have to build a walk-in downstairs, we're going to have to. There’s no other option. Glen: We don't even have a basement. It’s literally what you see in front of you.

Has this exceeded everything that you expected? Glen: Yeah, but you know, I think we kinda knew. We knew it was going to be successful. We do whatever job there is to do. If there are deliveries to be taken, then we take them, if dishes need to be clean, then we do that. Pete: If we put on Facebook that I’m delivering, everyone and their mother calls. And if Glen's doing it with me, everyone’s like, Yes! Glen: Yeah, and they’re like, “who’s at the store?!”, and then I say, “Oh shit, we don't know!”

Pete: We have a blast doing it. Glen: We really do. We party all the time. My life is basically a perpetual pizza party.