Share All sharing options for: Actually, I Didn’t Invent the Ziti Pizza

And now, a bit of pizza history from Eater cofounder Ben Leventhal: 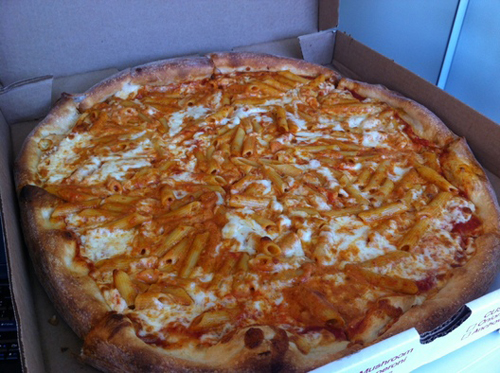 [Ziti Pizza from Famous Original Ray's]
Pizza, absolutely perfect in its natural state — the plain cheese pie — is also susceptible to mutation. Obvious offenders such as the pineapple and ham pizza, the buffalo chicken pizza and, certainly and grotesquely, the Pizza Hut Crown Crust Pizza come to mind. Also, the ziti pizza, of which there are three varieties: plain boiled ziti, baked ziti and penne a la vodka pizza.

In all its forms, ziti pizza is a thing of beauty. But, from where did it come?

The ziti pizza started appearing on pizza board menus across the Tri-State Area in the mid-1990s, for sure. Conveniently, viz what I’m going to say in the next graf, this predates the obsessive digital archiving of pizza that we know today. We cannot place the origins exactly. In researching this story, a guy at a nearby desk says he recalls having it as his local pizza place in Long Island in, he’d say, 1995. I reached out to Adam Kuban, founder of Slice and true practitioner of the religion of pizza and his response to my query on where the beast came from was, initially, “Oh, boy.” He also copied Scott Wiener of Scott’s Pizza Tours, who loosely confirmed that the excellent New York Pizza Suprema served a baked ziti pizza in the 1990s. He also added, “Ziti on pizza is a doozey.” Indeed. I called Suprema today and no one could recall them having served a ziti pizza in the past, which of course is not to say that they hadn’t. But if they did once offer it, they no longer do. Their best offer was a lasagna pizza. Mutation, yes; ziti pizza, no. 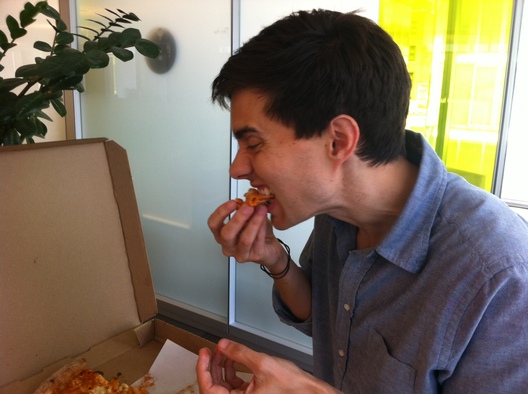 The whole point of this post is that up until a few hours ago, I was of the firm belief that I invented the ziti pizza. It was 1993, friends, and before I discovered the virtues of red meat and ramps I subsisted on a diet of pizza and pasta. Lunch was often baked ziti on a wedge (yes) from a Amici's Salumeria on Broadway and West 233rd Street. I was the "ziti on a wedge guy." Dinner, sometimes on the same day, was an entire New York pizza. And when you're that high on carbohydrates, your mind does things. Like eventually lead me to the idea of putting the ziti on the pizza, because how could an extra layer of cheese and sauce possibly be a bad thing? It wasn't, and though each of the first 10 times I ordered it I had to explain and confirm and reconfirm what I wanted, at Nicky's Pizza on Chatsworth Avenue the ziti pizza was born.

Except that it wasn't. The penne vodka pizza that the office consumed today — a pie that provoked reactions such as, "wow" and "oh my god this is amazing" and "oh, wow that's beautiful" and, from the most dubious of the group, "this is actually fantastic" — came from Famous Original Ray's. Ray's being since 1964, I was compelled to inquire there, too. Agatha Mangano of the Mangano family of Famous Original Ray's insists that they've been serving the pizza since the mid-1980s, when customers started requesting it. And, so, alas, it wasn't me. But I can take comfort in knowing it wasn't a marketing gimmick. It was a carb-crazed customer like me. Instead of '90s frivolity, it was '80s excess. So now we know. Ray's. Sometimes, the Yankees win.
· All Coverage of Pizza Week [~ENY~]