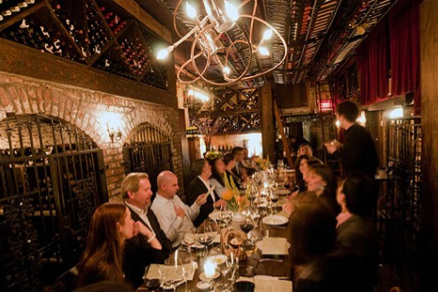 When New York magazine covered Il Buco in their April 3, 1995 issue they said this of the wine list: “? an eclectic selection of Italian, French, and Spanish wines mostly in the $20-$40 range, with a few Alsatians and South Africans thrown in.”

Let’s just say a lot has changed since then.

Il Buco’s list still covers the same countries (though South Africa was kicked to the curb), but now stretches back to the 1950s, and up into the thousands of dollars. It’s also seen a parade of talented wine directors since 1995, from the filmmaker and author Jonathan Nossiter (best known to the wine world for his film Mondovino and book Liquid Memory) to Roberto Paris (who made Sangratino di Montefalco Il Buco’s signature wine), to Bill Fitch, the current wine director at Vinegar Hill House. The list has now been under the watch of Paul Lang, formerly of Babbo, for the last three years.

Needless to say, it’s been through a few iterations in 18 years, but an impressive list of Italian wine has always been its constant. I spoke with a couple of Il Buco’s former sommeliers and wine industry types who have watched Il Buco grow up. What’s clear is that Il Buco is not only a New York establishment, but a restaurant that’s close in the hearts of many people who have spent decades drinking wine in New York. But it’s also a place that has changed its tune on pricing in recent years and has some, including myself, wondering what happened.

It remains a solid list full of great wines, but sadly the markups on everything from wines like Giacomo Conterno’s 2000 Barolo Cascina Francia (priced at $425 compared to $295 at both Bar Boulud and Eleven Madison Park) down to Arianna Occhipinti’s SP68 Bianco (which is priced at $72, but should be around $50-55 if the markups were NYC standard) are, by any standard, over the top. We've all come to expect numbers like this from restaurants like Cipriani or Nello, but not from a place that was once one of New York’s great wine destinations.

Clearly the clientele—which has, since the beginning, been dominated by the rich and easy on the eyes—will pay the prices. But that’s no longer an excuse in 2012, if it even was one in the late 1990s. The clientele at Eleven Madison Park and Bar Boulud will likely pay those prices too, but the best wine programs in New York have sought to pass on value regardless of pocketbook potential. In the end, if a diner knows that a restaurant is dedicated to looking out for them, that person is more likely to spend on wine. Trust and integrity matter and restaurants that strive to cultivate and maintain both often find that it translates to better sales.

But Il Buco has chosen a different route. And, more than anything else, that makes me sad. This a list that deserves to be enjoyed, but by marking up a great collection of wines 4—even 4.5 times—on top of the wholesale price, you turn that list into a profit machine that is no longer about the wines or the enjoyment of them.

Bang For Your Buck
Sartarelli Verdicchio dei Castelli di Jesi Classico 2010 $42
Sartarelli is easily one of the best producers working with verdicchio, the star white grape of Le Marche. Classic example of the interplay of the saline and floral characteristics that have come to be known as the hallmarks of this variety.

Biondi Etna Bianco 2008 $62
The red wines from around Mt. Etna in Sicily have been doing a bang-up job of getting around, but the whites have remained largely under-the-radar. Biondi’s Etna Bianco, made by star oenologist Salvo Foti, is made up of a medley of old vine Carricante, Minella and a few friends. The 2008, having spent a few years in the bottle, is a great example of the savory greatness of Etna’s whites. Still young and will continue to evolve over the course of a meal.

Bisson "Marea" 2008 $70
The flagship bottling from one of Liguria’s finest producers. This used to be a wine list staple, but is increasingly rare. It’s a blend of vermentino, bosco, and albarello that shows off the trademark salinity of these wines coupled with great density (thanks to prolonged lees aging) on the palate.

Burlotto Pelaverga 2010 $44
Burlotto is one of the oldest producers in Verduno, the Piemontese province that is known for the production of a strain of the grape called pelaverga piccolo. There are a total of only 12 producers working with this grape in all of Piedmont and less than half of them make it to the states. One of the best values out of Italy, period. Floral, peppery, lean, and a particularly good mate for cured meat.

D. Ventura "Viña Caneiro" 2009 $45
This is probably the best deal in this price range. It also happens to be one of the best expressions of Mencia out of Ribeira Sacra. Sourced from 80-year-old vines grown on Ribeira Sacra’s steep terraces. The result: the Spanish take on cru Beaujolais with, in true Spanish form, a bit more brawn.

Nusserhof Lagrein Riserva 2006 $75
The mark-up here is bordering on too high to be in this category, but the wine is still good enough to justify the price tag, so we’re keeping it in. Lagrein sort of hit a peak and fizzled out, but this stands as an argument to keep it close in mind. Sourced from organic vineyards and aged in large Slovenian oak barrels. Rustic, full-bodied and in need of a decant.

Crowd Pleaser
Gulfi Cerasuolo di Vittoria 2009 $48
Gulfi is making some of the more interesting, value-driven wines out of Sicily at the moment. This is the classic Cerasuolo blend of nero d’avola and frappato is fresh, herbaceous and, thanks to frappato, easy to love.

Off The Beaten Path
Contrà Soarda "Gaggion" Marzemino Nero 2008 $55
Marzemino is a rarity on wine lists. The grape is primarily grown in the region of Trentino but can often be found in neighboring regions, in this case, the Veneto. The grape has a parent relationship with both Refosco and Teroldego and is a sibling of Lagrein. This comes from a high altitude plot and is aged in used barrique. Trademark dense fruit and herbs. Has grip, needs meat.

Break The Bank
Ronchi di Cialla "Cialla Bianco" 1997 $150
Ronchi di Cialla’s flagship “Super Friulian” blend of ribolla gialla, verduzzo, and picolit is one of the Colli Orientali’s benchmarks. The wine is aged in barrel and generally starts to show its best after a decade in bottle. Expect more savory flavors, intense minerality, and lively acidity.

Robert Michel "La Geynale" Cornas 1990 $210
Classic Cornas from the now retired Robert Michel. (The great La Geynale vineyard is now in the apt hands of Vincet Paris.) By far one of the best buys on a list that isn’t exactly flush with them.

Renato Ratti Barolo "Marcenasco" 1978 $240
One of the other hidden deals on the list from Renato Ratti’s famed La Morra “Marcenasco” bottling. The 1978 vintage was a historic one for the Langhe and the wines tend to show very well at present. This should be no exception.

Il Buco Alimentari e Vineria
As a healthy foil to the length and economics at work at the original Il Buco, Lang has put together a short, easy-to-understand list at Il Buco Alimentari e Vineria. Taking a page from Anfora and San Francisco’s Bar Agricole, he’s forgone the traditional list format in favor of an intensive look at a small group of producers. At present, the list features just nine (one from New York, one from Spain, and seven from Italy), each presented with a short description of the estate and a selection of around five wines each.

Those well versed in Italian wine might find the format limiting, while others who are sick and tired of poring over traditional wine lists might greet it with a sigh of relief.

Eventually the Alimentari will run without a floor sommelier and for a restaurant that is choosing to go that route, this may be the best way to do it without compromising the dining experience. In other words, it’s easier to train staff on nine producers than it is to train them on 90. Ten sommeliers, Lang says, are better than one.

Most of the wines are under $100 and priced fairly. If you’re looking to splurge there is a small list of reserve wines, but at the moment they’re mostly young and easy to ignore. Lang says he plans to build the section out with ten to 15 high-end wines that are farther off the beaten path. In the meantime, if you’re looking for something special, Radikon’s Oslavej from 2005, priced at a stomachable $100, is the best place to go.

While Lang’s new list is interesting and approachable, it doesn’t read like a complete wine list yet. With a little more diversity (perhaps an additional five to ten more producers) it might establish itself as a breath of fresh for both the novice and the knowledgeable alike.

Bang For Your Buck
Garlider Veltliner 2010 $50
Really nice to see these wines being highlighted in place of some of the more visible producers like Pacherhof or Abbazia di Novacella. Small, organically farmed property owned by a husband and wife team. All wines are fermented with native yeast and stand as pure, classic examples of grapes like grüner and muller-thurgau.

Ca’Lojera Lugana Superiore 2005 $55
Trebbiano is one of the most dissed on white grapes in Italy. Though it is true that it generally stars in flavorless, watery whites, it has the potential to birth singular, ageworthy white wines (for those in the know, Valentini’s Trebbiano d’Abruzzo is one such example). Here you have the opportunity to see this local clone of trebbiano (considered by many to be the most superior) in three different lights, from fresh (2010) to mature (2001).

Odoardi Vigna Mortilla 2005 $60
The Odoardi wines represent some of the greatest values out of Southern Italy. The Savuto is entry-level bottling found on many an Italian wine list around town, but it’s worth spending a bit more to taste one of the rarer bottlings. More structured and girthy than savuto with the same floral, peppery aromatics and vibrancy.

Rainoldi Sassella Riserva 2006 $66
Sassella is the finest growing area in Valtellina, a region in northern Lomardia that acts as the second home of the nebbiolo grape. The Rainoldi section of the list allows you taste everything from the fresh, bright Rosso di Valtellina to “Sfursat,” the name given to the nebbiolo made in the style of Amarone. If you’re going with richer dishes, this is a good producer to look to.

Crowd Pleaser
Capezzana Barco Reale 2009 $42
Blend of mostly sangiovese with cabernet and a dash of canaiolo. Juicy, fruit-forward with a touch of funk. Easy to drink and a nice mate with red meat.

Break The Bank
There isn’t much here that’s worth throwing in on. Lang is quick to mention that it will eventually be revamped to include more esoteric, off-the-beaten path wines. For now, Radikon’s Oslavej from 2005 in 500ml at $100, isn’t exactly a steal, but is fair enough to warrant the splurge.