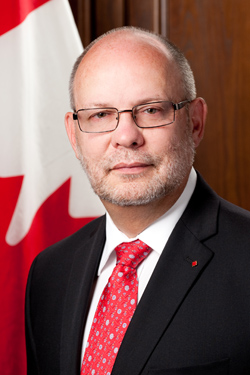 Guillermo Rishchynski was appointed Ambassador and Permanent Representative of Canada to the United Nations in August 2011. Before this, he served as the Canadian Ambassador to Brazil and Mexico. Below, he describes Canadian food, Canadian food in New York, and the general diet of an Ambassador.

So, first let's talk a bit about the Canadian bagel versus the New York bagel. Mhm, yes, a very polemical issue in New York, I know. But a bagel is like a lot of food we eat in Canada compared to the US. It's similar but different. It's got a bigger hole in the middle. It's got less air in it. Perhaps a little crunchier. And it's great we can get it here in New York! There's two places in Brooklyn: Mile End Deli and the B&B Empire on Clinton and Atlantic Avenue, and I've gone with my wife. And while it's not 100 percent it's 97/98 percent and we enjoy that because the Montreal bagel is a uniquely Canadian thing.

Have you been able to find other traditional and good Canadian food in New York? Yeah, I mean there are some sort of quintessentially Canadian dishes that primarily have their origins in Quebec with the Quebecois culture and food. The dish Americans probably know best is poutine, you know, which is French fries with gravy and curd cheese, and there are a couple of good places for poutine that we've gone to. My wife and I have had it at Mile End in Brooklyn, which is probably the best that we've had so far that I've had here.

And then, you know, from the Atlantic provinces there's Edward Island Mussels, you see them on a lot of New York City restaurant menus, and there are some really great places, like Flex Mussels, on 82nd between Lexington and 3rd, that we've gone to that are pretty awesome. We think they rock. And there are also a few restaurants that have tried to specialize in Franco-Canadian-type cuisine, or Quebec-American type cuisine. M. Wells, which is currently closed, and they served a very very good tourtiere, which is a minced meat pie that is quite popular in Quebec. I guess that along with poutine are the two things that are most revered in Canadian cuisine, if you can say that. But by and large Canada is such a multicultural place that there's food from all over the world, and we've adopted all of those foods as if they were Canadian. In Toronto you can find terrific West Indian food. In Vancouver you can find great Asian food. And every city in Canada features a wide array of cuisines popularized by the immigrant populations that have come to Canada from around the world.

What are some of your favorite dishes of the vast Canadian cuisine? I'm partial to tourtiere because tourtiere is a meal in itself. It's a minced meat pie so it generally has a crust in addition to the minced meat inside that spiced in various different configurations. That's probably the one I enjoy the most for dinner. For lunch, a quintessentially Canadian thing to do is grab some poutine from a sidewalk operator working out of a truck or a fixed installation, and that's a pretty good lunch in itself. So those I'd say are the two things I enjoy the most but certainly because we have three coasts, the Arctic, the Atlantic and the Pacific, just about anything you can get by way of seafood? Arctic Char, which isn't so common here in the US, because it's a northern fish - similar in color to salmon but a bit different texture. That's something that we in Canada I think enjoy a lot. Salmon, clearly, on both the Pacific and the Atlantic coasts is a staple. And mussels of all types, and oysters, particularly from the Atlantic area, and lobsters from New Brunswick and other parts of the maritime provinces — these are other things that I think all of us in Canada love to savor.

What do you like to eat around the UN and your embassy? We're blessed because we have a lot of places with a good variety of food. There's a lot of Turkish and Middle Eastern food which I happen to enjoy a lot because I lived in that part of the world for a great deal of time. And also you can get fairly good Italian food of all types. So there's a good variety, and generally because you're on the run going to one thing or another at the UN, you need something where you can sit down and eat very fast. And most of the restaurants here in the '40s, between Lexington going over to the river specialize in being able to give you a good meal and to do it quickly. So that's what I try to do for lunch time, especially.

For dinner, my wife and I really do like to explore all of the things that New York has to offer. This is the finest eating city on the planet because you can literally find everything from Ethiopian food to Thai to Latin American. So we do a lot of exploring and go out to different restaurants, mainly on the Upper East Side where we live, but we venture over to the West and down towards the Village and other areas. Everywhere we go, we always have excellent meals, and it's enjoyable to go out and just explore and be a little adventurous.

What are some of your favorite restaurants to go to for dinner? We live in the '60s on the Upper East Side, so one of the places we very much enjoy is Amaranth on Madison Avenue and 62nd. We're also very partial to Orsay which is a French Brasserie at 75th and Lex. We love the ceviches at La Mar, down by Madison Square Park, that's one of our favorite places to go. You know, New York is a place where you never eat badly, you can always find a very scrumptious meal of different ethnic origins, different price ranges obviously, but it's always fun to go out to eat in the city because of the differences and the variety to explore.

What New York restaurants do you miss when you're not in New York? I guess, you're probably going to laugh, but what I miss most when I'm not in New York are the pretzels. That's very, very unique. Being able to walk, like I did yesterday, around Central Park, and stop and get a New York Pretzel with the salt a mustard, that's not something you can get anywhere in the world. So that's one of the things that we miss very much when we're not in New York. And good knishes, a singular New York food. These are the types of things we really, really enjoy having when we're here in the city.

What are your favorite restaurants to go to when you're using your expense account? I haven't really had a chance to do that yet. But in any of the major hotels really, they have excellent restaurants that you can go to. Our problem is when we have visitors from Canada we're generally running around with them and you basically have to posit them back to where they're staying at the end of the day so you don't have much opportunity to dine with them. But the Avra on 48th and Lexington, is a very good restaurant that's very handy to most of the hotels that we use for visiting Canadian delegation. And we hope to over the course of our time here, we've only been here 6 months, really explore some of the upscale fine dining New York has, but so far we haven't had much of a chance.

What are your favorite cheap eats in New York? Anywhere were you can get a good Nathan's hot dog, or a sausage, if you're on the run that's a good meal in itself. Virtually every avenue of the city you can walk into a cafeteria-style restaurant and generally find something to eat very quickly. I think this is a city where a lot of people eat on the run. And we're discovering that, particularly on the work week, you do the best you can do during the course of the day and use the weekends to try to explore some higher end cuisine and be able to actually sit down and enjoy a meal with some good wine over the span of a few hours. But what I like is that ability here in New York to go to a little restaurant on a corner that serves you a good soup and sandwich during the lunch hour and you can finish it quickly and get back to lunch as quickly as possible.

What are some of the quintessential American specialties you've grown to love? There are two aspects to the question: one is as a Canadian, you're always a bit shocked when you come to New York and the US at the size of the portions because it is very different in Canada. For whatever reason, we tend to eat smaller portions of food. Here if you go to a place and order a hamburger you get an entire plate with cole slaw and pickles and French fries, so that takes a little getting used to. But what I think what I like most in New York are these things that are part of the New York landscape, which are things like the knishes and the pretzels, and you can go to different neighborhoods and experience different foods? my wife and I went to Brighton this past weekend in Brooklyn, and we had a lovely breakfast in a Turkish restaurant, the Masal Cafe, with a very different breakfast than what we would normally eat, and that was a lot of fun. And I think that's what New York brings to the table in every sense that makes living here such a pleasure.