The Roof of The Nomad is a Tantalizing Mystery

Share All sharing options for: The Roof of The Nomad is a Tantalizing Mystery

Last week, Daniel Humm and Will Guidara thrust open the gates of their culinary pleasure dome The Nomad, and New York hasn't been the same since. So far, diners seem to love The Parlor, The Atrium, The Library, the Fireplace Room, The Coat Check, The Mens Room, and The Ladies Room, but there is one last part of the The Nomad plan that has yet to be deployed: The Roof of The Nomad (hashtag: #TROTN).

Although it is not open to the public yet, a few lucky guests have received tours of this special space — which offers unparalleled views of the Empire State Building — and tweeted their instant reactions:

From Town and Country's Allison Luvera:

Humm and Guidara have mentioned serving food up on the roof, although no official plans for the space have been announced yet. The question is: will the roof be casual like in The Library, or slightly more formal, like The Atrium? Or will they hand out snuggies, offer bottle service, and make it an upscale rival to 230 Fifth? Only time will tell.

UPDATE: The Ulterior Epicure snapped a daytime photo of the rooftop "cupola" earlier this year: 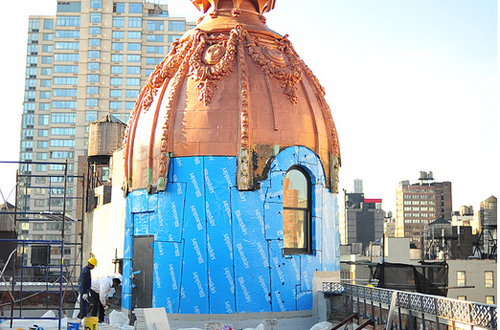 Find a picture of the whole thing here.
· All Coverage of Nomadness [~ENY~]