Share All sharing options for: Josh Früm and Robert Berry of Monument Lane 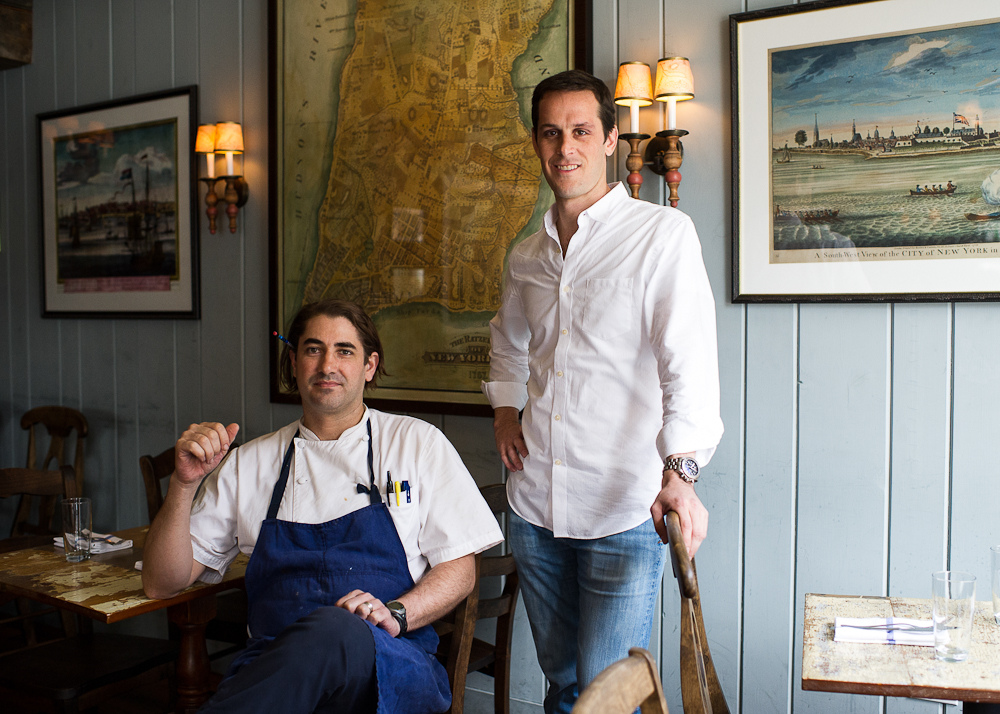 Monument Lane is the Colonial-inflected tavern perched on the corner of Greenwich Avenue and West 12th Street. The period themed space pulls inspiration from the history of the restaurant's location — it sits on what was once Monument Lane, which was the road that New Yorkers of the 1700 and 1800s took to retreat from the city to the countryside. Only a few months after opening, executive chef, Brian Murphy, stepped away from his role in the kitchen, citing, "irreconcilable operational and creative differences." Since that time, the menu has undergone a total revamp. The current executive chef and Cookshop alum, Robert Berry, focuses on market-driven food with some deliberate nods to the South. We sat down with owner Josh Früm and chef Berry to discuss the restaurant, the new menu, and what the pair have planned next.

When was the first time you thought about this restaurant and the concept? Josh Frum, owner: After we signed the lease, actually. I think we had a lot of different ideas that went back and forth depending on the neighborhood and what we were looking at. Then we found this spot in the West Village. It was always going to be farm to table, seasonal, local, that kind of stuff. But when we found this place, I locked myself into the Jefferson Market Library. I was just searching for different inspirations, and then I came across a map from the 1700s that had Monument Lane on it. The rest of the story kind of just evolved on its own.

When you opened there was a different chef. Have you seen many changes since then? Josh: It's totally different. There’s only one thing on the menu that has remained. The menu back then had a lot less movement. I don't think we were living the seasonality ethos as much as the concept demanded. That is something that Robert has done much better. Robert Berry, chef: I'm a half year in, not a year. I'm the second chef. I come from a background of changing the menu a little bit more, of going to the green market everyday. When I got here, it was going in that direction, but every chef has a different personality. Now it's mine fully, and that’s where we are.

What dishes do you feel most represent your move into the kitchen? Robert: I have a tendency towards pork. I mean, I know its a trend now, but I've been using it since my beginnings. If I want to get away from it, it's tough for me. I have to keep a leash on myself. One of my close friends, Bev Eggleston, at EcoFriendly Foods sells us the pork, and I buy about half a pig a week. We turn that into different things; a lot of charcuterie. I generally cook what I would like to eat, that’s my inspiration, kind of personally what I would eat. That’s where I come from.

Which markets do you frequent? Robert: I go to Union Square and to the Brooklyn markets. I ride my bike over to Borough Hall, I'll load things into a taxi and race the guy back. It’s a good wake up in the morning, gets the mind going seeing all the produce out there, talking to people, finding out what's coming, what's going out. Then on the bike ride back, I imagine what I’m going to do. It's just a good way to get the day going, with friendly people, the farmers and everybody. Josh: Its pretty funny. I'll see him coming, all hunched over, and he's got this 15 gallon backpack on. I'll think, man that's a good score, and then three minutes later the taxi rolls up coming from Brooklyn with a huge trunk full of stuff...

Is the menu fully defined by what you are pulling from the markets? Robert: Not exactly right now, no, because the season is just getting underway. Everybody imagines that because it’s 70 outside, you’re going to have peas right away, but that’s not the case. Right now, we're still kind of in the winter lag, but at the height of the summer, sure, it's everything I can find I turn into something. I got some kids in West Virginia that forage ramps for me. So right now, that's heavy because I get them to pull 200 pounds a week and then I sell them to chef friends and personal people I know. It's kind of this underground thing. I get on the phone and call everybody and get rid of them as fast as I can, because that's just an immense amount of ramps. I only use like 20 pounds a week because were kind of a small place. I have to get rid of 180 pounds by bike, or by my spice guy, or by somebody coming by. It’s definitely ramp heavy right now.

Along with menu changes and shifts in the kitchen, what were some of the other surprises that have come up along the way? Josh: I think there's always a little bit of movement from having this vision of what you want to be and then having your guests tell you who you actually are. I think we might have set out to be a little bit more gastro-pubby with a late night crowd, which were still just now building. I think immediately off the bat we were seen just as a restaurant. The discrepancy between knowing what you are going to be and people telling you what you are was the biggest surprise for me. Robert: For me, I fell in love with the space when I walked in. I was like, this is cool and then I started imagining the downstairs––a West Village Kitchen, small, rabbit-warn, low ceiling––then I walked down the big staircase and it just opened up. It's painted and the ceilings are white, and I was like wow, this is beautiful. I could work here.

What are some future plans? Josh: Future plans that we have right now are to create unique events and experiences to continue to have that kind of culinary conversation with our guests. We're going to be starting up our Sunday suppers soon. We just did this promotion thru Gilt City where we we're doing a four-course tasting menu. It's just been such a great response that we are going to do that continually. Then, because Robert has such great relationships with all of his farmers and his purveyors, we want to bring them in or take our guests out to go shopping with them. Just involving our guests more with the experiences we're having. And then there's the cafe. That's another one of those things that still a month away, but the outdoor seating. Now's a great time, people love to be outside.

Does it feel like its been a year? Robert: It feels like it's been a year for me. But that's good. If you go to work and it feels like work, you should probably get another job. You're lucky if you can go to work and you feel good about what you do and have fun doing it. Josh It feels like about five for me. Including the year and a half build up, probably about 20. As fun as it was, there were so many road blocks with red tape and bureaucracy. You expect something's going to happen by December and it doesn't happen until March. When you're opening a restaurant you're involved everyday, so there were times, I think at the opening, where I didn't have a day off for like three months. So yeah, it definitely feels a lot longer, but the fall was a lot of fun. Once Robert came on board and things just got moving. It's been good.