Julian Brizzi and Henry Rich of Rucola in Boerum Hill

Share All sharing options for: Julian Brizzi and Henry Rich of Rucola in Boerum Hill 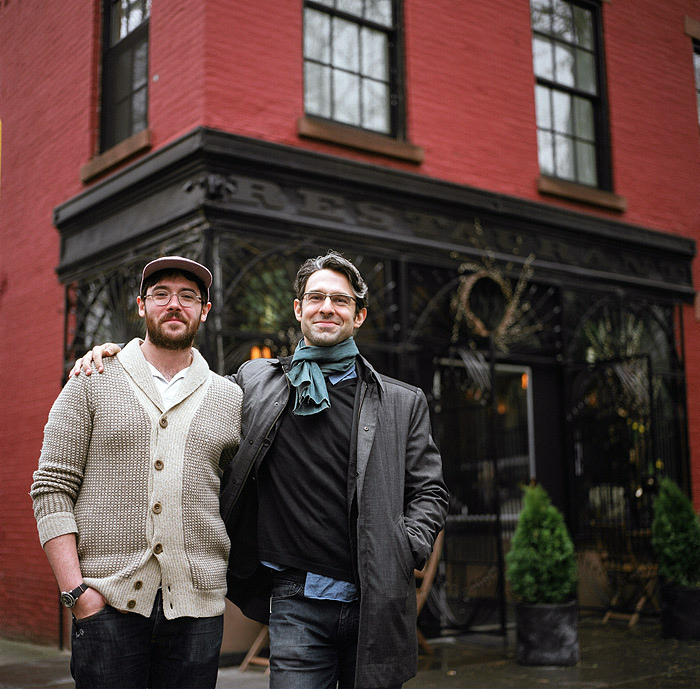 [Krieger]
A year ago, two cousins, Julian Brizzi and Henry Rich, opened the iron gates to their fifty-seat Boerum Hill restaurant, Rucola. Neither Julian nor Henry had ever worked in a kitchen before, and the very idea of owning something they could call their own was really just a pipe-dream. The restaurant has since transformed into a neighborhood favorite, hosting lines that wrap around the corner of Dean St. for brunch and dinner. A changing menu of house-made pastas, cured meats, and seasonal vegetables has created a growing list of regulars and Brooklynites, each seeking good food on a block that once offered little. We recently spoke with two of the members of the Rucola team about how the restaurant came together, and what they've got planned next.

When was the first time you talked about opening your own place? Julian Brizzi, owner: I would say about four years ago, Henry was like "We are going to start looking for property, start working on a menu, and start working on a business plan." And I was like, "We'll treat it as a project and see how far it goes. It won't be real." Henry believed we could open a restaurant at our age with our limited resources — me having no money at all and him having a fair amount of connections, and actually making it happen. I mean I didn't believe it was actually going to happen.

With little restaurant running experience between the two of you, how did the actual process begin? Henry Rich, owner : Well it all sounds like a joke, but Julian had been holding it down managing over at Prime Meats and was a really important part of what they were doing, so I said, "How about we open a place? Like you obviously know how to do this and I don't. I know how to start a business, and run a business, and you can run a restaurant." And actually it was a silly idea but it worked pretty well. I got the ball rolling and then Julian kicked it down the road, then we got chef Joe Pasqueletto and sous chef Patrick Miller on and, suddenly we have like 30 employees. But I had no experience whatsoever working in a restaurant. Julian: But he'd dined in several of them. (laughing)

How did chef Joe join the team? Julian: Despite having worked in New York food for ten years and having a bunch of people I thought would be perfect for the job, we found Joe on Craigslist, and now he's like, the dude. Henry: Not just that, we had a final list of people we were going with and having tastings with, and then Joe just kind of came out of the blue as the the perfect candidate. He was working at Gilt at the time, it was immediately clear that he was the right man.

As for the physical opening, what was the build like? Julian: We started with a demolition department, there was no power. For a restaurant with no gas we needed significant power increases that didn't come for a month after we opened. We opened with a power strip coming from my back apartment, and one fridge and two burners, there was no floor, the basement was a bunch of debris. Henry: But it was exciting also, because we had to build everything from scratch. Definitely one of the most special things about the restaurant is this location, and the way the people feel walking down a few blocks and seeing the iron wrought window. Even though we were looking at this pile of rubble in the basement and this shell of a space, it was pretty clear what we needed to do. Julian: The place had an identity of itself before it even opened, people wondered about it. Henry: It was really fortuitous or I guess maybe it was meant to be, I don't know. I knew this was it. It was this space or nothing for me.

Are you surprised by all the success and positive press so far? Henry: It has definitely exceeded my expectations. Julian: Am I surprised at how much people like the restaurant? Yeah, I think so. We were pretty full right when we opened up, which is really cool. Definitely the business has increased substantially, but I think a lot of it has been getting our footing, figuring out how we serve food, how quickly we can do it, how efficiently we can do it, just getting better at the job. I mean we're still working on it, we're getting there. I think the neighborhood needed this restaurant in addition to the few that are around here already that are great.

Because you are so busy, is making a time-consuming item like handmade pasta incredibly difficult? Julian: Our first few weeks we were making it on the communal table, which was a piece of plywood with saw horses in the middle. Yeah, and that was like a very simple menu then. Those guys were down there making pasta from 3- 5 p.m., when we open at 5:30 p.m. and we'd sell out almost immediately. We've now got a pretty sturdy machine, but it takes one person pretty much the whole day to make enough pasta. Now we're starting to sell retail pasta too. It's one to one-and-a-half people a day making pasta. Henry: Yeah, one of the nice things about the new machine is that you can put in other ingredients like ramps, or arugula, or chestnuts, like they do in Italy, truffles or Barolo, things like that.

What else is coming up? Henry: The retail thing is really exciting, and we have another restaurant we are working on. It's really too early to say a whole lot about it, but its out in industrial East Williamsburg. Same basic principles of ingredient-driven food Julian: It's a little bit bigger than the current one, similar motif but a bit of an adjustment for that neighborhood and that space. One of our guys from the kitchen is probably going to be cooking in it so, we wont be doing a 180 or anything. A different name, similar style of food, in that it is just, well, good. The range is not NoMad. Henry: I want to be able to afford to eat at my own restaurant. Julian: Yeah, we don't want to be the kind of place that serves a $44 carrot.

Does it feel like it’s been a year? Julian: Feels like it's been about 15 years. Henry: Yeah, it feels like forever and just yesterday. We went out with Chef Joe and Patrick on a ramp hunt right before we opened. One of our first things we did at the restaurant was just gave away ramps. We were like no strings, come into this restaurant, get some free ramps. In the beginning we put ramps on everything: fish, veal, pasta, sides of ramps, pesto...Julian: Ramp butter on the veal.... Henry: That was nice, yeah I liked that. It was fun for us cause we were getting all dirty; we drove over in my car and went to this undisclosed location and came back with a couple garbage bags full of ramps. And now its ramps season again. Especially being a seasonal restaurant, to sort of bookend the year, we're doing another ramp hunt in a couple weeks. And then chef [Bill] Telepan was in the restaurant yesterday eating ramps, and it was just like, it feels like a year. Because we have the seasonal book mark. It's exciting because people get really excited about ramps, and for us it's always going to feel like that's our birthday.