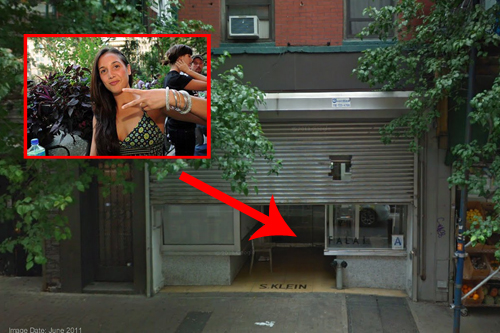 Andre Balazs did not appear at last night's CB3 Meeting to seek approval for his monster revamp of The Standard East Village — his team withdrew until next month. But there were a lot of juicy reveals for several other new projects. Here's the first word:

1) To be Determined, 68 Clinton St: As noted last week, Top Cheffer Leah Cohen and Fatty Crew head honcho Rick Camac are planning a South East Asian restaurant in the former Falai space. They received initial approval for a beer and wine license. They also asked for a license for the backyard and noted that they would keep the same layout and hours that Falai did. The board responded by saying that they didn’t know Falai was using the backyard. Ultimately, the board approved backyard usage pending a separate certificate of occupancy as long as the team agrees to close the outside area by 10 p.m.

2) Porchetta LLC, 110 E 7th St:? Matt Lindemulder of Porchetta was denied approval for a wine/beer license. Several people from the neighborhood voiced concerns about people drifting into the streets with their beer or wine because the restaurant is so small, but ultimately a lack of paper work was what sealed the deal. He was asked to withdraw and come back next month and the board seemed to think that it may be easier to propose a beer only license.

3) Lo-Fi (KAD LLC), 21 Essex St?: KAD LLC is taking over White Star and changing the name to Lo-Fi. The bar will close at 2 a.m. Sunday through Wednesday, and at 4 a.m. Friday through Saturday. They will be adding food and a doorman Friday and Saturday. The former owner of White Star, Danny, said he is “moving on with his life,” and leaving the nightlife world.

4) Ellsfred Inc, 520 E 6th St: This is the space that was formerly Joe’s Bar. Joe’s wife sold it to the owners of Sophie's on Fifth Street. after Joe passed, but the bar has been Joe’s since 1973. The pair agreed to change the name to Josie's because “Joe’s” hit a little too close to home for his wife. Both of the new owners live on Sixth Street and have been regulars of Joe’s for many years. The tavern will maintain the façade that Joe’s previously had and the owners will do their best to pay tribute to the “historical value” of Joe's. They received initial approval, but a resident of Sixth Street complained that the best thing that ever happened to Sixth Street was when Joe’s closed, shouting, “It’s not McSorley’s!”

5) Downtown Dining LLC, 5 Ave A (op)?: This is a transfer of assets at what is now Nice Guy Eddie's. Darren Rubell, of Gallery Bar on Orchard, is taking over the space. The menu will be American comfort food and he plans to make the windows larger, but not floor to ceiling. Rubell was questioned about former issues at Gallery Bar, specifically involving sales to minors on three separate instances. He responded by saying they have cleaned out management and don’t expect to have these problems in the new space. Rubell won initial approval, but agreed to close the windows by 10 p.m.

6) Sorella (Piedmont Hospitality LLC) 95 Allen St.: The Sorella team requested to add a new dining room in what was formerly the Stellina space. Sarah Krathen and Emma Hearst will be knocking down the wall between Sorella at Stellina and adding 20 to 25 seats. Expansion is estimated to be complete within the next four weeks and Stellina will reopen as a window front.

7) The DL (93 Ludlow St Inc) 95 Delancey St: The operators of the former Ludlow Manor space were approved for liquor license on the second and third floors. The owners have brought on Paul Seres as an operational partner. Seres is a co-chair on CB 4 and is on the liquor licensing committee. He owned Soul, which held 660 people. The DL agrees to having no live music or DJs on first floor, but there can be live music or DJs on other floors for private, charitable events. They also agreed to have ID scanners at all entrances, a minimum of one security guard for every 70 people, traffic personnel if necessary, and Seres must let the board know if he leaves the partnership. The first floor will serve as a restaurant and lounge, the third floor will serve as a lounge with food and a retractable roof, and the second floor will be used for overflow for those waiting to get up to the third floor. Seres says this will prevent people from crowding in the streets. A cover charge will not be used unless there is a charitable event being held. The board said to Seres, “This is an endorsement of you,” then turned to the owners of DL and said, “I’ve kind of lost faith in you.”

8) Miller's Near & Far LLC, 65 Rivington St: This is the former Kuta space. The application was for an American restaurant with sidewalk café and basement. Owner Chris Miller, who also operates Warren 77, has received complaints from the CB9, but he says he doesn’t intend to have the sports bar feeling that Warren 77 has. Miller is a Graduate of French culinary institute and plans to run the restaurant with classmates. This is his first solo project and he plans to call the restaurant Near and Far. They agreed to soundproof in advance, and to close at 12 a.m. Sunday through Wednesday and 2 a.m Thursday through Saturday. Miller received initial approval for a liquor license.