Amali's List is the Equivalent of Freaking to Bacharach

Welcome Decanted, in which Eater wine editor Talia Baiocchi guides us through the treacherous world of New York wine lists. 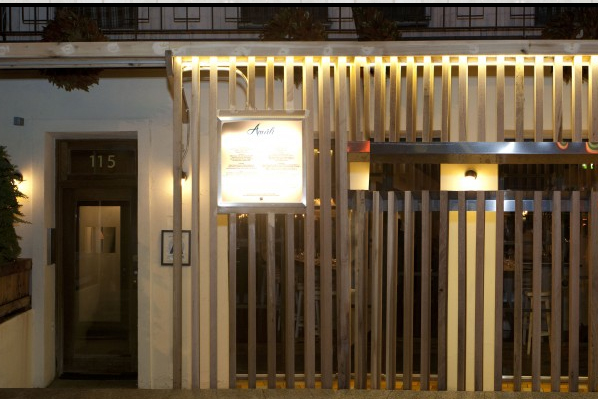 Somewhere in between Madison and Lexington on the Upper East Side lies a very empty and dated dance floor for wine. The addition of Amali’s wine list to this neighborhood is essentially the equivalent of freaking to Burt Bacharach.

In other words, it’s bold.

It’s the newest restaurant to join Nicola Kotsoni and Steve Tzolis’ brood, which currently includes Il Cantinore, Bar 6, and Periyali. While Kotsoni and Tzolis are joint partners it’s really the brainchild of James Mallios, a former attorney who, five years ago, left his practice to work in restaurants. After two years as the general manager of Resto and one year at Persephone he convinced Kotsoni and Tzolis to open a Mediterranean restaurant that was built on the Greek notion of “katharo” or, in English, “the virtue of simplicity.”

Mallios is about a hundred miles from the stereotypical sommelier, particularly one with an interest in natural wine. He’s bald, brash, and tough—a sort of Greek version of Tony Soprano who looks more likely to kneecap you than pour you a glass of assyrtiko.

But pour you a glass he will.

Getting out of law and into wine and restaurants was a return to Mallios’ roots in a sense. According to him, Greek plus Queens equals restaurant and he attributes his decision to a latent attraction to the industry that most New York City Greeks come stock with.

At Amali, Mallios brings the love of small artisan producers that he developed at Resto to 60th between Lexington and Park—right smack in the center of wine’s nowhere. He’s also boldly stocked his list full of Greek wines almost no one has heard of.

The average downtown New Yorker interested in wine can probably name three Greek grape varieties, while the average rich lady north of 55th speaks nothing but sauvignon blanc. But in spite the perceived preferences of the UES demographic Mallios has put together a well-edited collection of Greek wine with an unlikely focus on the country’s reds.

The pricing avoids the temptation to reach deep into pocketbooks that are well accustomed to being picked at surrounding restaurants. The mark ups here are, at the very least standard and at best charitable, particularly up around $100, which is often a no tread zone if you’re looking for steals.

Outside of Greece Mallios does best in the Languedoc, Roussillon and the Rhône. But the list does falter a bit with Burgundy and Bordeaux, so it’s best to stick with the Adriatic, Aegean, and Mediterranean wines. They make sense with the food and are refreshingly intrepid in the context of 60th St.

Bang For Your Buck
Assyrtiko | Sigalas, Santorini 2008 | 54
The island of Santorini has been producing snappy whites for centuries and we have finally caught on. Thanks to cruises and romantic getaways assyrtiko is one of the few Greek grapes that Americans ask for by name. This is a great deal on benchmark assyrtiko with a few years in bottle from one of Santorini’s best producers.

Sauvignon/Semillon | Chateau du Champ des Treilles, Bordeaux 2005 | 52
For whatever reason Bordeaux blanc has received the perennial shot end of the stick in the US market, but if you're willing to hunt there are rewards in this category. Here’s a nice, mature example from one of Bordeaux’s first organic properties.

Mandilaria/Mavrotragano | Argyros Estate, Atlantis Red, Santorini (s) 2007 | 40
The Atlantis line from Santorini stalwart Argyros represents some of the best all around value in Greek wine. And while Santorini gets plenty of attention for its whites, its reds made from these two local grapes are gaining much deserved traction. Think sweet and sour. A great match for all things meat and grilled.

Limniona | Domaine Zafeirakis, Tyrnavos (o) 2008 | 55
One of several new Greek reds to hit the market and the first ever Limniona I’ve ever tasted. This was once a grape that could be found all over central Greece before phylloxera. Zafeirakis has spent more than a decade resurrecting the grape. 2007 is the first vintage of this wine, which in some ways recalls restrained CA pinot. Loveable and bright.

Xinomavro | Yiannis Boutaris, Ramnista, Naoussa 2008 | 56
A traditional take on Xinomavro from one of Nauossa’s standard-bearers. Dark cherry fruit, funk, herbs and beautiful balance of tannin and acidity. Drinks well now, but built to hold on for a bit. Needs rich food.

Vlachiko | Katogi Averoff, Rossiu di Munte, Ioannina (o) 2009 | 70
Katogi Averoff is the only producer of a monovarietal Vlachiko. This comes from an alpine region in northwest Greece and is one of the most interesting Greek wines out there. Super high in acid, earthy, and herbal. Super elegant, exciting new addition to the US market.

Crowd Pleaser
Xinomavro | Thymiopoulos Vineyards, Young Vines, Naoussa 2009 (b) | 50
Apostolos Thimiopoulos is one of Greece’s young rockstar producers whose become well known for his polished take on Xinomavro. This young vines bottling is a loveable introduction to his style and is great with a slight chill.

Off The Beaten Path
90% of the wines from Greece could fit into this category. From outside Greece Henri Milan’s Le Grand Blanc is always a great choice if you spot it on a list. Only a few left here so get ‘em while they’re hot.

Under $40
Savatiano | Papagianakos Estate, Attica 2010 | 38
Savitiano is the dominant white grape in the region of Attica, which is home to Athens. The best versions of this grape are, despite the heat here, delicate, floral, and brisk. Here's one.

Break The Bank
Liatiko | Domaine Economou, Sitia (v) 1998 | 95
This is, in my mind, the most exciting new wine in the market from Greece. The wine hails from the island of Crete where and is made from special clone of Liatiko grown nowhere else in Greece. The grape is grown in high elevations of the Ziros plateau, in eastern Crete and yields wines that are reminiscent of traditional nebbiolo. All of the techniques are traditional and the wines drink wild and pure.

Mavrotragano | Domaine Sigalas, Santorini 2008 | 110
Again Santorini is known for its white wines produced from the assyrtiko grape, but the island also produces a small amount of red wine primarily from the mavrotragno grape. Most of these wines do not make it to the U.S. and very little DNA information is known about the grape, which grows only on Santorini. Floral, peppery and herbal with formidable tannins and ample acidity. This is one of the best examples of this grape in the market from one of the producers who is responsible for its resurrection.

WTF?
While Mallios points out that his long list of Bordeaux is there to cater to UES clientele, it does stick out like a sore thumb on the list.
· All Editions of Decanted [~ENY~]
· All Coverage of Amali [~ENY~]