Congratulations to Veselka Bowery, the new spinoff of the venerable Ukrainian institution that is trying to make a go of it in the Avalon Bowery building on Extra Place, for winning the Deathwatch reprieve vote. Now to business.

The Case for Deathwatching Bigoli: 1. Follow the arrows. 2. Critics including Bloomberg's Ryan Sutton don't seem to know the place is open. 3. It might not be priority number one for absentee chef Alex Stratta (who still lives in Vegas). 4. It is a smallish Italian restaurant serving good/great Italian food in a neighborhood rife with sexier, buzzier, better competition. 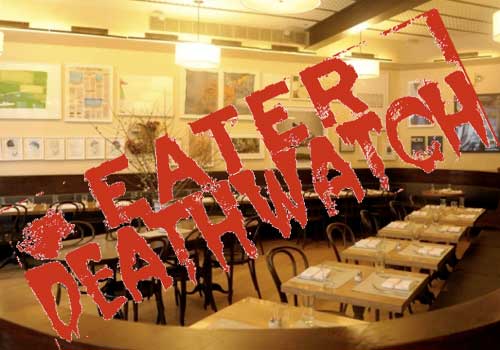 The Case for Deathwatching 10 Downing Food & Wine: It's a tough space with some chef turnover, but most of all it is on the market and is being aggressively shopped. 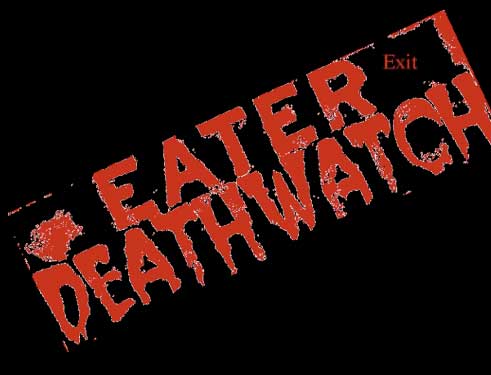 The Case for Deathwatching Dans Le Noir: See below:

New York, NY-March, 5 2012-After Paris, London, Barcelona and St
Petersburg, Dans le Noir? opens its fifth restaurant in New York
City. Dans le Noir? enhances the patrons other four senses with the
ultimate experience of dining in the pitch-black dark. Convinced that
distinctiveness creates value, its founders and teams prove it daily
with 50% of staff with heavy disabilities.

Entering the lightless dining room, guests are guided to their seats
by a team of expert guides, most being blind. In New York City, Dans
le Noir? works closely with two local foundations "Visions and
Services for the Blind" and "Lighthouse International" to hire its
blind staff.

With its official opening on February 27th, Dans le Noir? has been
busy booking reservations as this groundbreaking concept reaches the
restaurant world of the United States. Located at 246 W - 38th Street
in the heart of the "Fashion District", not far from Times Square,
Dans le Noir? intends to be one of the most fashionable new addresses
of the Big Apple. This New York venue is managed by Marco Valente, a
New Yorker who has been in the restaurant business ten years with
starting his own restaurant at 19 years old.

The developer of all the Dans le Noir? branches has unique in its
blood, Ethik Investments an elite, independent and innovative group
of companies founded in France in 2003. The group is also developing
event and consulting activities worldwide and expect a growth of more
than 30% with an expected turnover between 9 and 10 million (USD)
this year.

Thanks for voting.
· Poll: Which Restaurant Should Not be Deathwatched? [~ENY~]
Foursquare