Share All sharing options for: Kate Deibler and Hadley Haslegrave of Paulie Gee's 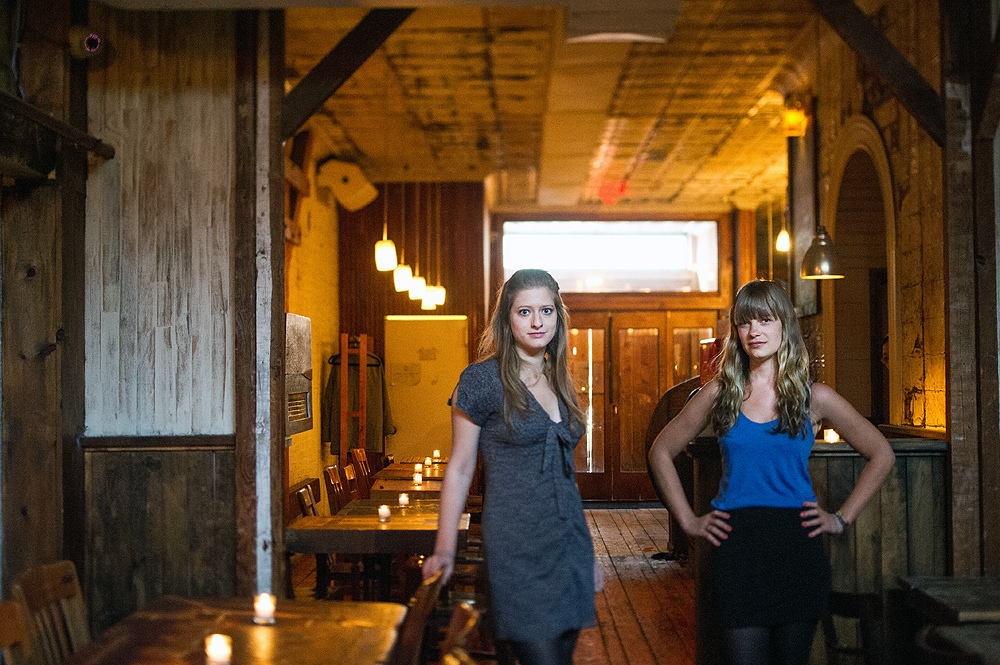 Although it hasn't received quite the same level of praise as places like Motorino or Keste, Paulie Gee's in Greenpoint serves some of the city's very best Neapolitan-style pizzas. The menu features traditional pies as well as unusual creations like the Anise and Anephew, which is a crust topped with braised fennel, fior di latte, anisette cream, guanciale, and fennel fronds — it's a terrific combo. The restaurant is extremely popular with people who live in the neighborhood, but it also attracts a lot of diners from Manhattan, Long Island, and New Jersey, many of whom are there to see the restaurant's proprietor, Paul Giannone. We recently chatted with managers Kate Deibler and Hadley Haslegrave about what it's like getting a table there on a busy night.

It's 8 PM on a Saturday night. What's the wait for two? Hadley Haslegrave, manager: About an an hour, or an hour and a half.

Is there anything I can do to make my wait shorter? Kate Deibler, manager: Sometimes people don't come back immediately, and we only wait like five or ten minutes before filling the table, so you have a better chance if you hang around. Hadley: Yeah we have a small bar, but people will go to a bar down the street or something to have a drink while they're waiting. And then people don't come back, and you could have an opening. So, people that hang out here and have a beer can luck out.

What's the longest wait you've ever seen here? Hadley: Like two and a half hours. In the past, we've had to stop taking names at 9:30 PM, because we close at 11 PM.

Tell us about your favorite customers. Hadley: There's Sam, he's this guy that comes in with his girlfriend. I don't know why they're my favorite, but they come in probably every weekend. And it doesn't matter what the wait is — it could be two hours — they're just always totally easygoing and awesome. Kate: My favorite customers is this woman Haddie — she's probably like 80 or 85. She's kind of short and she just makes her way through the crowd of Brooklynites and says, "So, how long for two?" And then at the end of the meal, she's always concerned about whether the person she's been eating with has tipped enough. She'll slip you something and say, "Make sure the server gets this."

How would you describe your clientele? Hadley: We have a lot of neighborhood people that come in regularly, but we definitely get a lot of customers from Manhattan, and we also get a lot of people from Long Island and New Jersey, because Paulie is from New Jersey. A lot of people know him or they've heard of him, things like that.

He has some die-hard fans, right? Hadley: Yeah, I mean he's always here, but there are times when people ask to meet him. Kate: Last weekend actually, he was away, and someone came in and they were like, "Is Paulie here tonight?" And I explained that he was not, and they said, "Oh, I guess we'll come back." The pizza tastes the same whether he's here or not, you know.

Who are your VIPs? Kate: There are no VIPs at Paulie Gee's.

You say that like it's some sort of mantra. Kate: No, Paulie says it all the time. Hadley: We get people that will come in and they'll be like, "Well, I know Paulie." And I explain that there's nothing I can do. Then they'll say, "Well let me talk to Paulie," assuming that he's somehow going to get them ahead on the list. It's like one of my favorite things that Paulie does, because he'll come up and they'll say, "Oh, hey Paulie," and he'll say, "There are no VIPs at Paulie Gee's." There are customers that know exactly where they are on the list and exactly how many people are ahead of them. So if you were to ever try and pull something, they would know about it. Kate: Sometimes I'll be seating a table, and the list will be on the host station, and I'll see people peering and flipping pages to see where they are.

What's the strangest request that you've accommodated? Hadley: I think that when bacon marmalade was still around, a lot of people requested that on the In Ricotta Da Vita pie.

The bacon marmalade is not on the menu anymore, correct? Hadley: No, the people that make it moved to Spain. Kate: People were really upset about it. Hadley: I begged them for the recipe. I was like, "We won't sell it, we'll just put it on the pie." And he was like, "No way."

Has there been any request that you couldn't accommodate? Hadley: Ketchup. Somebody asked for ketchup for their pizza a few weeks ago.

What's your most important tool for working in this space? Hadley: The staff is my most important tool — we're a really well-oiled machine. When I'm waiting for tables, they'll come up to me and be like, "I dropped the check here, they paid." The amount of people in here can get really intense, so we're just in constant communication with each other. Kate: For me, it's just remembering that it's not a personal thing if someone gets upset. I can't get upset, because then I'm off the entire night, and I can't be as chipper as I need to be to tell everyone "no" for six hours. So for me, it's all about making sure that I'm positive when I walk through the door.

Where do you like to eat when you're not here? Kate: Yeah, I guess that both of us are pretty big foodies. I eat a lot of Tres Hermanos, it's off the Jefferson stop on the L-Train. Hadley: I like Diner. Andrew Tarlow can't mess up a restaurant.