Share All sharing options for: North End Grill Finally Offers a Reason to Drink in BPC 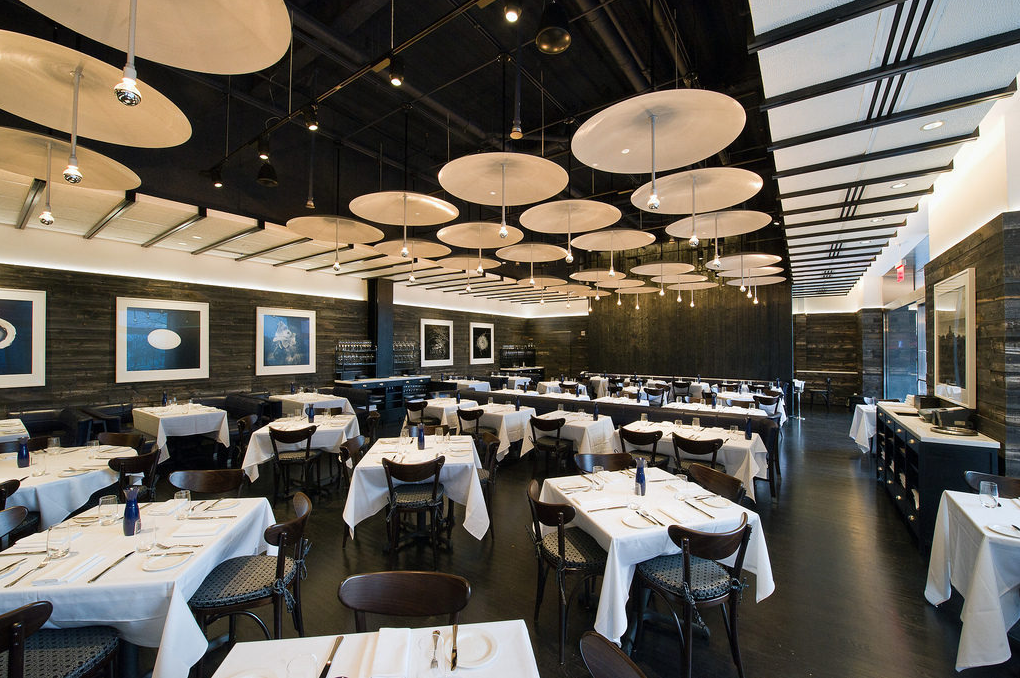 Battery Park City after dark feels like walking through a developer’s model of a New York City neighborhood, full of buildings still unnamed and parks with those perfect lollipop trees. It’s a place that feels merely imagined: at once coldly surreal and strangely idealistic.

People scamper through the streets at dusk in a hurry to get somewhere else, as if the apocalypse were scheduled for 8 PM. But there’s very little reason to linger, you can walk blocks without seeing anything but legs on treadmills and empty leasing offices. About one block south of Warren on North End Avenue you start wondering whether you’ve been incepted. Then, in the nick of time, a clue: Shake Shack. This is not your dream—it’s Danny Meyer’s. Straight ahead you’ll find North End Grill. Around the corner: Blue Smoke. And all those people scampering off, they’re just on their way to one, or the other two.

Only those who have never heard of Danny Meyer would be surprised that he’s managed to open three successful restaurants in an untested “neighborhood” like Battery Park City.

North End Grill is the most ambitious of the three, clearly aimed at wrangling the indigenous banker crowd and other moneyed folk. The bar and dining room are starkly black and white exuding a sort of machoness that mingles perfectly with the smell of smoked meat and the clank of ice cubes knocking against glasses of single-malt scotch. It’s the power luncher’s idea of a casual, the American banker’s take on a brasserie.

The extensive list of scotch—which is one of the most impressive you’ll find outside of fine dining—is perhaps a nod to this crowd, but it’s presented in such a way that it invites us all to consider a nip or two. It owns a whole page, the wine another, and is offered (with illustrations!) by the wee dram, the fair measure, the flask (4 wee drams), the nip (half a wee dram) and the plank (your choice of three nips) and is organized by aroma and flavor. It’s as sweet and disarming as it is impressive, a theme that carries through the entire beverage list, which is the work of USHG Beverage Director John Ragan and North End Grill Beverage Director, Jason Hopple—a self-proclaimed country boy from Jersey Shore, PA (that is not a joke).

Before heading down to North End to oversee beverages, Hopple spent more than five years at Meyer’s The Modern, managing everything from the cheese program to the private dining room. North End Grill marks his first foray into beverages and a very successful one.

Now, back to the nitty gritty. Before we make our way to wine, Scotch makes another notable appearance in the cocktail section, where it acts as the base for half the drinks on the classics-dominated list.

Wine opens with 26 available by the glass that range from a $9 glass of 12-year-old grenache from the Languedoc-Roussillon to a $26 glass of 1999 Vigna dei Dardi Barolo, with most of the wine sitting around the $13 mark.

But the real reward here lies in the full bottle list. In a city full of mid-size lists that look the same or fail trying to be different, North End Grill is a great example of how to do it right. It acts as a sort of mirror image of the menu, with wines whose flavor profiles mirror perfectly the flavors that define the menu (salinity, earthiness, smoke, citrus). Stylistically the wines are varied but why each has been chosen is mostly evident. They are wines—from Chenin-master Francois Chidaine to California’s miniscule Grenache-only label A Tribute To Grace—that exhibit a discernible vision and purpose. While there are plenty of recognizable producers on the list, the guys take care to introduce diners to a good number of wines that exist outside the spotlight—particularly from America.

The great majority of the list lies below $100 and there’s a nice sweet spot of great wines between $75-100, but with mark-ups this low right now there is really no wrong price point to be in. In fact the only bad decision you can make here is bypassing a glass of scotch after dinner.

It’s an accomplished list attached to a restaurant that, despite its odd locale, manages to remind us of why New Yorker’s have become so comfortable being a part of Danny Meyer’s dreams.

Bang For Your Buck
Riesling Kabinett, Dhron Hofberg, A.J. Adam, Mosel 2010 $58
Andreas Adam’s wines are getting better every year and will likely become more and more expensive in the years to come. Odd vintage for many producers, but great clarity, purity and balance of fruit and acid here. If there is one young winemaker to watch in the Mosel, it’d be this guy.

Riesling Grand Cru, Saering, Dirler, Alsace 2004 75
Nice classic Alsatian riesling from the biodynamic Dirler estate. Generally a pretty austere, mineral-driven wine in youth, but with a few years in bottle it should drink well on opening.

Chardonnay, Demuth Vineyard, Knez, Anderson Valley 2009 62
Great, high-acid chardonnay from one California’s most interesting Chardonnay vineyards. Located on a ridge 1,750 feet above sea level and sourced from low-yielding 25+ year-old vines. Anthony Filiberti of Anthill Farms is overseeing the winemaking at this new label and the chard is already the standout.

Chinon, Les Graves, Fabrice Gasnier, Loire 2010 44
Gasnier may not be a widely recognizable name from Chinon, but his wines suggest he should be. Cab franc’s trademark herbaceous notes are generally more subdued on these wines than they are with some others, which makes it a great choice for those who might not be as fond of the grape’s greener charms. All techniques are traditional and the small farm (about 7.5 acres) is biodynamic.

Oltrepò Pavese, Cavariola Riserva, Bruno Verdi, Lombardy 2005 58
This wine has always been, in my mind, one of the most classically *Italian* red wines. A blend of mostly bonarda with uva rara and barbera holding up the caboose. It hails from Oltrepò Pavese, a long dismissed region in Lomabardia near the Emilia-Romagna border. This is rustic, gritty stuff with the plushness uva rara and the brightness of bonarda mingling with the pleasant funk of barbera.

Santenay 1er Cru, Les Gravières, Bruno Colin, Burgundy 2006 75
Great value-driven traditional producer working with a variety of sites in the Côte de Beaune. Great value from a vintage that is showing well now from one of the best sites in Santenay.

Barolo, Vigna dei Dardi Riserva, Fantino, Piedmont 1999 104
One of the best values in classic Barolo. The wines have become scarce outside the Meyer empire. All the nebbiolo produced at the estate is sourced from the province of La Morra, known for its floral, more delicate expression of the grape. Maialino opened with 1998 and North End goes with 1999, which is one of the brothers’ best releases from the 90s.

Crowd Pleaser
Sémillon Blend, Buty, Columbia Valley 2010 52
America is often chastised for not producing enough distinctive and affordable white wine, but there are dozens that challenge that assumption. At Buty in Walla Walla, Washington winemaker Caleb Foster puts ou one of the state’s best whites. His flagship white from 2010—a blend of sauvignon blanc, semillon, and muscadelle à la Bordeaux—is all lemon oil, spice, and mineral.

Under $40
Melon, Les Gras Moutons, Pépière, Sèvre et Maine, Loire 2010 39
Hard not to go straight to muscadet if you’re on a budget. This is a particularly good deal on this old vines (about 85-years-old) single vineyard bottling of Gras Mouton, which has replaced Pépière’s beloved Cuvee Eden (a blend of Gras Moutin and two other sites).

Off The Beaten Track
England, Brut, Bloomsbury, Ridgeview, Sussex 2009 66
Many of us in the wine industry have been hearing about how wonderful English sparklers are for some time now, but they are still difficult to find stateside. One of the few wine lists to feature one in NYC.

Break The Bank
Champagne, Blanc de Noirs, Inflorescence, Cedric Bouchard 125
Prices on Bouchard keep going up as the geeky—and well deserved—clamor around them becomes more and more deafening. Singular, terroir-driven Champagne that’s worth the splurge—particularly at this fair price point.

Chassagne Montrachet 1er Cru, La Maltroie, M. Colin-Deléger 2002 165
Michel Colin-Deleger is easily one of the best producers of Chassagne out there. Techniques are classical and the wines show a great balance of dense fruit and rocky minerality. Great vintage for white Burgundy that should show well now.

Volnay 1er Cru, Santenots, Domaine Robert Ampeau, Burgundy 1999 145
One of the most respected men in Burgundy, Ampeau releases his wines only when they are ready to drink—a practice that is now endangered in Burgundy. His wines are always reliable values as well as classic examples of their respective terroirs.

WTF?
Tight ship. Nothing to complain about here.