Some restaurants stick around for a year, others just a few months, and some are only open for a matter of days. Here's a list of 10 recent blink-and-you-missed-them Super Flop restaurants: 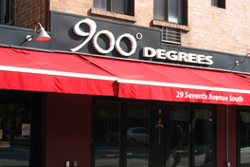 10) Pizzeria 900 Degrees: There are perhaps two reasons why this West Village pizzeria died after just four months in business. 1) To survive in the over-saturated pizza market, you need to do one thing, and do it very well. And this place served four different styles of pizza. 2) One of those styles was "American Pizzas" with toppings like pulled pork, quail eggs, New Zealand-style lamb, and cactus salsa. 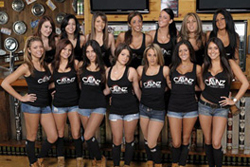 9) Canz: The shuttering of Canz is a real Super Flop mystery. This place had buxom, scantily-clad waitresses serving beer and wings, and it was right in the heart of Murray Hill, a neighborhood full of people that generally embrace those sort of things. Maybe the lesson to be learned here is that if you're going to do a Hooters knock-off, the girls can't have died hair, painted nails, or dangly jewelry. 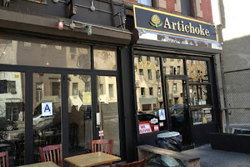 8) 14 Carrot: Pretty much the definition of a "blink-and-you-missed-it" restaurant. Vegetarian comfort food joint 14 Carrot replaced the similarly-minded Curly's Vegetarian Lunch in late February. By the second week of March, it was dust, and now next-door-neighbor Artichoke has moved in. Someone should really take the menus from 14 Carrot, Curly's, Counter, and Quantum Leap, put them in a box, and bury them under St. Marks Place so that future generations can discover that vegetarian restaurants once existed in the East Village. (Photo: EV Grieve) 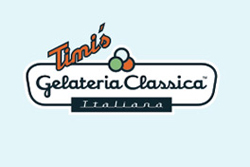 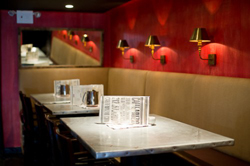 6) Stivale: Bobby Werhane's West Village Italian restaurant Spasso is a total hit. But his other neighborhood Italian place Stivale just didn't work, even though it was accessible, affordable, and located right in the middle of one of the most tourist-heavy blocks of Bleecker Street. Stivale lasted just three months, confirming that this is one of New York's most cursed spaces. 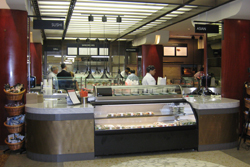 5) Milk Street Cafe: Milk Street Cafe might be remembered as "the restaurant that closed because of Occupy Wall Street," or "the massive, doomed kosher food hall near Zuccotti Park." Milk Street opened in June, and by mid-October the entrance was partially obscured by crowd-control barricades. The owners claimed that it was hard for people to access the restaurant, and that Wall Streeters didn't want to leave their offices for lunch. Milk Street closed in December after many of the protestors had left Zucotti Park, and now Donald Trump is moving in. 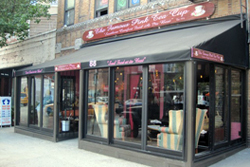 4) The Pink Tea Cup 2: Last summer, shuttered soul food classic The Pink Tea Cup was brought back to life by Lawrence Page, a successful neighborhood businessman who was also a longtime fan of the restaurant. He bought the trademark, hired one of the old chefs, and moved the operation a few blocks north. Then he announced plans to expand to Harlem, shuttered the new location, and said he was going to to move it down the block. Shortly after that, news broke that this place was toast. Page recently opened Auberge Laurent, a French wine bar in Harlem, but we probably won't see another iteration of The Pink Tea Cup any time soon. 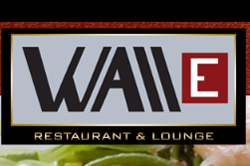 3) Wall-E: Last spring, restaurateur Wally Chin opened Wall-E, an "American restaurant with Chinese flair," in Midtown. It closed about six months later after some decent reviews, but very little press overall. The real mystery here is why Chin, who had built up a devoted clientele at his legendary Midtown restaurant Chin Chin, was not able to lure some of his customers to this new restaurant. It's surprising, but if you look in the Official Super Flop Handbook (978-0312347406, Workinghouse Publishers), chapter fives states that "any Manhattan restaurant that shares the name and logo of a beloved Pixar movie about a show tunes-singing robot is ultimately bound to fail." 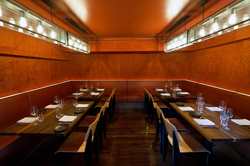 2) Pillar & Plough: This restaurant in the Hotel Williamsburg had a veteran of L'Atelier de Joel Robuchon in the kitchen, and a massive space with several impressive red-hued nooks and crannies. It was an interesting project, to say the least, but Pillar & Plough folded after just two months when the hotel was bought by another management company. The fate of the space remains unknown, but hopefully it will someday fulfill its destiny as a place where wealthy young Manhattanites go to part with their cash. 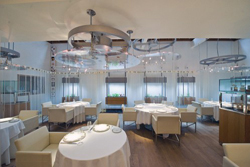 1) Romera: What's the Spanish word for Super Flop? Like many outsiders before him, Neurosurgeon-turned-chef Dr. Miguel Sanchez Romera struck out in NYC, big time — his fine dining folly lasted just 25 weeks. Some of The Doctor's colorful, unusual creations were delicious, but no critic could give this place a full-fledged recommendation because of its absurd $245 price tag and somewhat spooky subterranean space. But really, Romera raised the bar for Super Flops in so many ways — the wacky water pairings, the inscrutable menu cards, the lounge area that looked and felt just like a doctor's waiting room. Fingers crossed, it might even become the first Super Flop to win a posthumous James Beard Award.
· All Coverage of Super Flops [~ENY~]