A Close Look at Isa's All 'Sans Soufre' Wine List 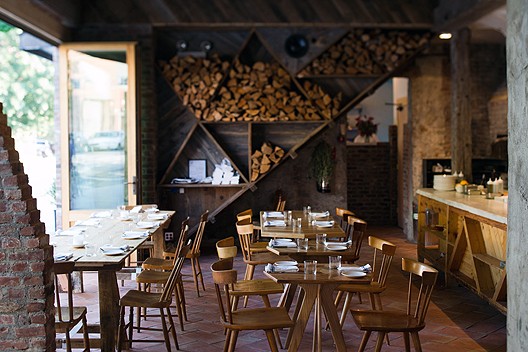 Isa’s wine director Byron Bates wants to lower your expectations of wine. Before taking over the beverage program at Isa, he planned to open a wine bar that would “raise people’s expectations of beer, and lower their expectations of wine.” His vision included something to the effect of serving high-end beer in wine glasses, and wine in cups to see if that sort of reverse psychology might help unravel people's fears of wine. The wine bar never came to be, but he has a similar challenge at Isa. In Williamsburg it's not necessarily about fear, it's more about encouraging people to drink something they've rarely considered.

To feel out the natives he started small with a one page list of only “sans soufre” wines (those made without the addition of SO2, an antioxidant and preservative that is a by-product of winemaking, but also an additive). These wines fit into the broad and difficult to define category of natural wines, which have reached a peak in popularity over the last few years.

But Bates is quick to remind people that his interest predates the craze. He first got natural wines in the late 1990s, while working at Balthazar. He went on to work at places like the now defunct Starfoods—which sought to fuse punk rock with avante-garde French wines—before taking over the wine program at Amy Sacco’s Bette in the mid 2000s.

He brought his love of natural wines with him to Bette and put together a list of tough-to-find gems — still before natural wines became the subject of the wine world’s biggest culture clash — and boldly put them in front of an unassuming celebrity audience.

A lot has changed since then. Now the natural wines can be seen all over the city's wine lists, from Gilt to Kin Shop, and have become the centerpiece of places like Ten Bells. For one, the wines are much easier to sell now. In fact, his orange wine category—which is the list’s most expensive—sells better than white and red. But the popularity of natural wines has Bates worried that his lists might simply be written off as a cheap play to Williamsburg’s hipster faction, given the counter-cultural perception of the wines. (Which, in truth, is what I was quick to assume.) But for Bates, these are simply the wines that inspire him and he is convinced that these are the only wines that really fit with the culture of the restaurant. It's why he took the job.

But he knows full well that he now has to set himself apart from a number of other quirky Brooklyn lists at places like Marlow & Sons, Vinegar Hill House, and St. Anselm.

He's vowed to do so by nearly revamping the wine list on a monthly basis and seeking out wines that you won't find on other lists around town. What we get is more or less a short list of the most esoteric wines of esoterica. But as frightening as that may sound, the wines are simple, affordable and half the list is available by the glass or carafe, which allows you to do more than just marvel at gamay from Serbia or orange wine from Croatia.

But what's really worth commending here is not what's on the list, but how it fits into this neighborhood and this restaurant. Depending on what side of the natural wine divide you are on, you'll likely have an opinion about the merits or non-merits of a sans soufre wine list, but no matter where you stand it's difficult to argue that this list doesn't work here.

The restaurant is sort of like walking into a new age cabin with a bathroom built by someone on an acid trip. It's mecca for men with beards and pretty women who don't brush their hair. To complement the aesthetic, there is a similar haute rusticity to the food, which is in turn effortlessly carried over to the sorts of pure, but imperfect wines on the list. More than anything, though, both the food and the wine are built on a bit of risk; sans soufre wines are not easy to make well and combinations like dill and squid ink aren't exactly obvious. All of these philosophical intersections between the aesthetic, the food, and the wine are not on accident, either. You get the feeling right away that this is a weird, but very smart restaurant.

The trick with many of the unorthodox wines on the list is to know their specific temperaments and treat them individually. Bates is up for the challenge. For example, some of the reds on the list are known to give off CO2 on opening; they are aerated accordingly. Orange wines are served closer to cellar temp and reds right at cellar temp. Whites only rest on top of the ice so they never get too cold.

Despite all of this fussing, the cocktails and beer still sell better at Isa. But Bates is determined to figure out how to present the wines in a way that resonates with a neighborhood that’s grown up with very few places to drink a good glass. In his mind, and also in mine, Williamsburg has all the potential to be an interesting neighborhood for wine, and Isa is in a prime position to capture its attention.

Bang For Your Buck
CROATIA (ISTRIA), Clai Bijele Zemlje, Malvasia Jakov, 2009 $16/27/51
Croatia’s most famous natural winemaker. Giorgio Clai’s farm is located on the Istrian peninsula just south of the Italian city of Trieste. The vineyards are farmed biodynamically and the wines raised in neutral oak. This wine is 100% malvasia istriana, fermented with extended contact with the skins rendering it darker in color, more structured and more aromatic. Great wine that’s a quirky intro to Croatian malvasia.

PROVENCE, Domaine Henri Milan, “Le Grand Blanc”, 2008 $60
A member of Nicolas Joly’s “Return to Terroir” group of winemakers who are dedicated to biodynamic principles and have vowed to make wine using non-interventionist principles that they believe will allow each appellation to best express itself. Le Grand Blanc is an unorthodox blend of Grenache Blanc, Chardonnay, Rousanne, Vermentino, and Muscat, grown in blue marl soil (the same soil found in many top Chablis sites). The wine is slightly oxidized, intensely aromatic, and mineral-driven. One of the most stunning whites out of southern France.

CHIROUBLES, Brignot, “Vin d’Etable 2010 $52
One of the most sought after natural wine producers, Brignot is located in the Jura and sources fruit from several plots in Beaujolais and Burgundy that are farmed organically and/or biodynamically. Pretty structured wine for Chiroubles with great density and acidity that’s built for food.

Off The Beaten Path
SERBIA, Francuska Vinarija, Gamay, 2008 $45
It’s hard to get more off the beaten path than Serbia. This winery was founded by a French couple with ties to Burgundy. The region of Serbia where this wine is made (Rogljevo) has a wine history that dates back to Roman times and was once a more common sighting in wine shops in the late 1800s. Made from a strain of gamay particular to this area, sourced from organic vineyards and vinified traditionally in large wooden vats and bottled without filtration.

Crowd Pleaser
ASTI, Barbera, Carussin, “Asinoi”, 2010 $11/20/36
Family run biodynamic farm. This is the sort of pure, vibrant barbera that I wish we saw more of here in the states. Raised only in stainless steel.

Under $40
ALSACE, Julien Meyer, Pinot Gris, 2009 $8/15/29
Julien Meyer has long been a non-conformist. He adopted organics in the early 90s and biodynamics in the later part of the decade, at the beginning of what would be come a legitimate trend in Alsace. Clean, lovable.

Break The Bank
CHEVERNY, Villemade, “Desire” Pinot Noir, 2009 $135 (MAG.)
Blend of Pinot noir with about 20% gamay from Cheverny. Villemade took over his father's farm in the late 90s. At the time it was conventionally farmed and, disappointed with the quality of the wines he converted to organics, transferring the whole farm over in 2000. Around this time he discovered that he had a skin allergy to sulphur and began to work with less and less. He's best known for his whites,but the reds also show great clarity.

WTF?
Though the list is kept small so that it can be rotated frequently, gaining at least a dozen wines would make it more dynamic. Bates plans to expand to around 80, and still still rotate wines in and out frequently.
—Talia Baiocchi
[Photo: Krieger]