This new subterranean restaurant, dubbed Strip House Grill, has a similarly plush, old New York feel, with plenty of red banquettes, comfy chairs, and a long bar serving beer, wine, and classic cocktails. You can order the full menu from the original next door, but Strip House Grill also has a new menu that features three different burgers, a filet mignon sandwich, a lobster roll, and "lobster frites, " plus a few salads (both appetizer and entree portions), soups, and a full raw bar. All the entrees on the new list are priced $18-$26, with the exception of the lobster frites, which is $39.

An early visitor to the grill writes in: "Everything I had that was from regular Strip House was just as good — once exception, creamed spinach — a favorite of mine — was almost room-temp. cold. But steaks, salads, other sides, etc. were all great. Didn't try the multiple burger options, but like the addition of them very much." Check out the grill menu here, and do send any early reports our way.
Previously: The First Word, 11/11; Tweaks, 10/12; Big Deals, 07/12.

Here are some of the new dishes: 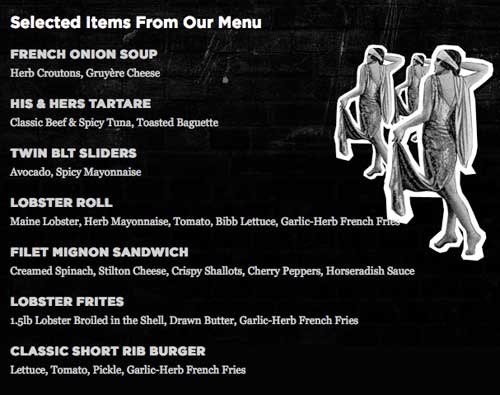